The Russian-Italian Dialogue Forum has already been successfully developing contacts between Russia and Italy for twelve years. This Forum was conceived and realised with the participation of the IMA-Press communication agency as an open informal arena for the discussion of urgent problems of modern times and issues of Russian-Italian relations, and for the development of public, cultural, and humanitarian cooperation. The agency’s General Director, Natalia Astashkevich, shares her thoughts on this Russian-Italian project and tells why IMA-Press loves Italy so much. Natalia speaks about IMA-Press’ culturological projects, taking the unusual creative project ‘The 100th Anniversary of the Country’ as an example.

It is often considered that Russians and Italians resemble each other. This is attested to by the fact that Italy and Russia have taken a liking to each other, and this fondness cannot be undermined by any economic crises or sanctions.

Both Russians and Italians have had great periods of prosperity in their history. There are lots of cultural and historical parallels, and ‘points of contact’ between our countries: Nikolai Gogol, Fyodor Dostoevsky, Maxim Gorky, Joseph Brodsky – all of them visited Italy and admired it. The Moscow Kremlin and the palaces of St Petersburg were built by Italians. As a rule, Russian painters and composers were pupils of their Italian counterparts.

It is perhaps no coincidence that in the Soviet era the Italian Fiat was chosen out of more than a dozen automobiles from various countries and nations as the base model for Zhiguli [a brand given to Lada cars in Russia]. Heads of the Soviet automobile manufacturers must have felt the closeness of the national characters as well.

In all turns of our history both Italians and Russians tend to deviate from their path and go ‘to the left’. We both dislike working on strict schedules and meeting deadlines – we are used to think in the terms of eternity. Our first word is always the word of protest. Spartacus and Giuseppe Garibaldi are not only Italian heroes but, in some sense, our heroes too. The Italian strike is like the Russian rebellion – it is ‘meaningless and merciless’ [the words of the Russian poet Alexander Pushkin].

Our countries have much in common, but we have always wanted to have more in common. Italy is one of the closest partners of Russia in Europe. Our countries’ relations go far beyond the scope of the official and business contacts. It is not merely a matter of economy, it also means the mutual attraction of national mentalities; the mysterious Russian soul is interested in the Italian soul which is not less mysterious. Dostoevsky believed that ‘beauty will save the world’, and all of us know that Italy is first of all associated with beauty. The Ferrari and Lamborghini sport car brands, Marcello Mastroianni and Sophia Loren, arts, design… And there is not a Russian who does not like Italian food! And guess where do our Russian compatriots go every year in pursuit of fashionable clothing? And what about opera singing? There are only three official opera languages: Italian, German and Russian. This is significant, too.

It so happened that the team of IMA-Press gave their priority to Italy. Simply speaking, we love this country. We are frequent visitors to Italy, we adore its cities which have a wealth of artistic monuments andwhich are art in themselves. At a certain moment IMA-Press was charged with the task of implementing the mutual attraction of the peoples and cultures in the format of ‘the people’s diplomacy’.

As a result an organization with a long, but informative name, appeared: The Russian-Italian Dialogue Forum along the Civil Societies’ Line. Thus IMA began to investigate Italy – this time not at the amateur level, but as professionals, arranging a wide range of impressive events both in Russia and Italy.

We have organised everything: folk dances of Russian Cossacks at Piazza San Marco in Venice, ‘A Week of the Russian Language’ with lectures of our writers, master classes in cities’ streets, a meeting in Rome dedicated to energetics, a concert performed by Yury Bashmet and Sergei Butman at the old Abbey of San Galgano… And we could enumerate many other events. The Russian-Italian projects in which we have been privileged to participate were very different, yet each of them had a distinct culturological element.

Picture 1: the project – ‘A week of the Russian Language’ in Italy.

From time to time at IMA-Press we prepare projects that are non-specialised, but really make us and our numerous friends very happy. Such absolutely different events as meetings of a club of experts, holding of biennial modern art exhibition festivals, the celebration of the anniversary of the film ‘The Beginning’ at the ‘Illusion’ Moscow cinema and, of course, creative New Year presents are combined under the banner of culturological projects.

It would be impossible and even unnecessary to tell your magazine about all IMA-Press’ cultural initiatives. I will speak just on one of them, on a present .

IMA-Press and the project of the century

The table cloth that we have designed, made and given to 1000 of our closest friends for the New Year is called ‘The 100th Anniversary of the Country’. How was this idea conceived? Every year we think up an unusual New Year present. We begin to prepare it for the next New Year well in advance, starting immediately after taking down our New Year tree. So we had figured out that 2017 would be dedicated to the 100th anniversary of the Russian Revolution before many other people. So if we are asked: ‘Which country is celebrating its 100th anniversary?’, we will answer: ‘It is the same country, our only motherland.’ Many things have changed over 100 years: the territory, the political system, the flag and even the name, but the country remains ours, and we cannot exist without it. It is only here that we can work, love, raise our children, build and live. We feel that we are needed by someone else here. The weight of our common past paradoxically helps us move forward.

Definitely this date is an excellent idea for a New Year project. We therefore asked friends of IMA-Press, experts of history, cinema, science, theatre, literature and music to remember the significant and remarkable events that occurred over these 100 years. Little by little the idea was developed: to place all these events of the century on to a table cloth. In order to avoid theatrics, it was decided to use a normal kitchen oil cloth for this historical experiment. There was room only for a shorter version of the century’s history on the oil cloth. In order not to deprive the readers of the pleasure of familiarizing themselves with the complete works, we decided to publish a separate booklet with all the authors’ full texts in addition to the table cloth. 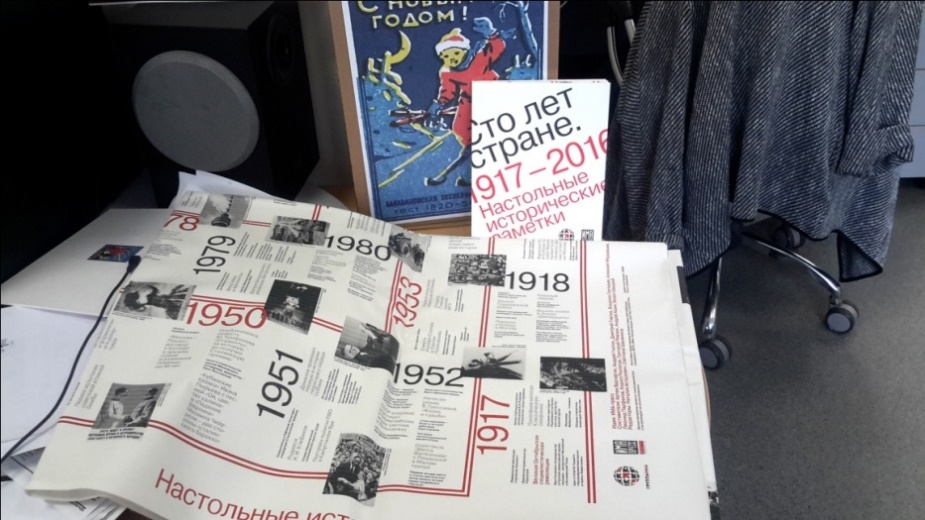 Picture 2: the oil cloth with the booklet. The authors of the project’s texts: the journalist Leonid Parfyonov, the historian Alexei Muravyev, the film expert Kirill Razlogov, Academician Andrei Khazin, Chairman of the Board of Trustees of the Russian National Big Book Literary Prize Vladimir Grigoryev, the music critic Artem Vargaftik, the architecture critic Grigory Revzin, the theatre expert and public figure Mikhail Shvydkoy.

Picture 3: the package is like an enlarged copy of a matchbox of the 1970s.

The selection of the project’s events is a result of the authors’ arbitrariness and arguing about tastes, so you shouldn’t regard this ‘table history’ as a textbook.

Meanwhile, the ‘historical’ table cloth has proved a very useful and informative accessory for kitchen gatherings. There was enough room on it for a variety of themes which will be very good for table talks on the destiny of Russia and reflections on the past. Do you want to talk about it?

…Many of us lived in the USSR for most of our lives. For very many years we walked towards a brighter future, and this means a great deal in itself. We remember this path perfectly well, even if we still weren’t there then! That is emotional memory, if not genetic memory. Lenin is still perceived by many as if he were alive and his thoughts are often cited. And what about the Civil War? Who can forget these ‘elusive’ Chapay and Sukhov, Petka and Petrukha [characters of the popular Soviet films Chapaev and White Sun of the Desert]?… And we are making our bright way along the Volga-Volga River [these are allusions to the famous Soviet musical comedies Bright Way and Volga-Volga]! You have a light heart, you enjoy your work and life! Everything is so nice! And you will never leave your friend, if tomorrow brings war, if tomorrow we march [a quotation from the Soviet patriotic song, If Tomorrow Brings War]…

Beyond all doubt, there was intelligence, honour and conscience, we ‘worked over and above the plan’, and ‘long live all this.’ We launched the sputnik (artificial satellite), we had physicists and lyricists [an allusion to the poem by Boris Slutsky with the same name], celebrated ‘October’ holidays. The first fresh snow, your father with a banner, hurray! Hurray! And then – the Olivier Russian salad and vodka as you come home from frost… We had a rather totalitarian regime, our leaders ‘tightened the screws’, but we cannot erase history. And we cannot help but remember our blue tickets to the cinema for the film The Sandpit Generals, an ice-cream in a cup, a pair of compasses with the name ‘goat’s leg’, striking three chords on the Shikhovskaya guitar [produced at the Soviet factory with the same name near Zvenigorod]and the Pioneer camp’s hot cereal. What should we do with this old junk heap that is so dear to our hearts?

The elusive avengers have left us forever, rode away, on their faithful horses to the land of the red setting sun. Where should we return, if we ever have such a desire? To the queue for a trailer tank of real cold kvass [a traditional Russian soft drink made of bread]where they still remember us? Maybe to a shared apartment where children of various USSR nationalities are watching the only TV in the flat and where the most interesting animated cartoon is ‘Well, Rabbit, Just You Wait!’ and there will be no better animations? Or maybe to Zhiguli of the second model – the most beautiful car in the world after Pyaterka (‘the Five’)? Or to the first viewing of the Amarcord comedy-drama film on ‘a wonder of engineering’ – the first Soviet MV-12 videocassette recorder? What have we preserved and what have we lost for good?

Don’t worry, nothing has disappeared! Everything is kept on the table.

Do come to see us, or invite us to see you! We will have both a forum and a dialogue. We will sit round the kitchen table (according to a tradition observed by Muscovites) with a table cloth on it, and will have a talk… About Russia, about Italy and each of us. We have a common past – and such a great past! So we will surely have a common future.