Depression can be avoided under any circumstances, however it requires reasonable cooperation, negotiation skills and refusal of unnecessary ambitions

VYACHESLAV KATAMIDZE, a writer and historian

The USA and some other Western countries are gradually relaxing quarantine restrictions, and the businesses are coming back to the operational mode being called “close to normal one”.

Finance ministers recognise, that complete restoration of enterprises will take long time and many billions of dollars. Losses are so great that economic experts of country leaders strongly encourage them to use their best efforts to start repairing economy immediately. The most pessimistic economists suppose that, as a result of the pandemic and related colossal financial losses, the world may face economic tremors which can be compared only to the Great Depression of the 1930s.

Exactly, the Great Depression was the hardest time lived through by developed countries between two world wars, and to a certain degree it triggered World War II.

The Great Depression began in the USA in 1929 and lasted for a whole decade. American historians wrote that the major reason for the chain of events leading to the dramatic economic collapse included crash of securities and the whole stock market. But if we scratch beneath the surface, we will see that stock market decline had been caused by unprincipled stagging, forced stock cost escalation and low-secured stock emission.

October 29, 1929 is called the first day of the Depression, or “Black Tuesday”. After the stock market crash, the whole USA suffered from a real “economic tsunami” which washed banks, enterprises, entire economic areas away. 700 banks collapsed over the first two months of the Depression; other 3000 banks went into bankruptcy during the next year of 1930. By the end of the decade the failed banks numbered 9000.

Bankruptcy of the banks led to millions of depositors loosing their savings. As a result, population everywhere began to draw money out of other banks, that propelled into a long chain of collapses among financial institutions. By the end of the second month following the market crash, shareholders lost 40 billion US Dollars, worth around 800 billion in 2020 dollars. The US economy was close to the total collapse.

The first several months of the Depression showed a rapid growth in unemployment, mass impoverishment, speculations, and development of black market as well. It resulted in a sharp drop in consumer demand, consequently, more and more enterprises got closed. Unemployment increased fast. Diseases caused by malnutrition and worsening living conditions became common in poor districts. Millions of people completely lost their accommodation.

The countries exporting their goods to the USA did not face such economic hardships at the beginning of the Depression as importing countries did. For want of a better response, the United States Congress adopted the so-called Tariff Act which actually protected and gave advantages to the remaining American companies by increasing import taxes applicable to a wide range of the imported goods. Global trade faced a sharp slowdown. At the last, President Roosevelt and the Congress were forced to adopt a new act, according to which the president could negotiate introduction of new, lower tariffs.

In addition to all the difficulties experienced by the USA, the country suffered from another catastrophe: severe drought repeatedly happened year after year in the states being especially important to the whole country due to their agricultural output. As modern agricultural implements were manufactured in very limited numbers under the Depression conditions, with the low amounts of investments attracted in this sector, volumes and quality of agricultural products dropped. People in many states completely stopped farming. 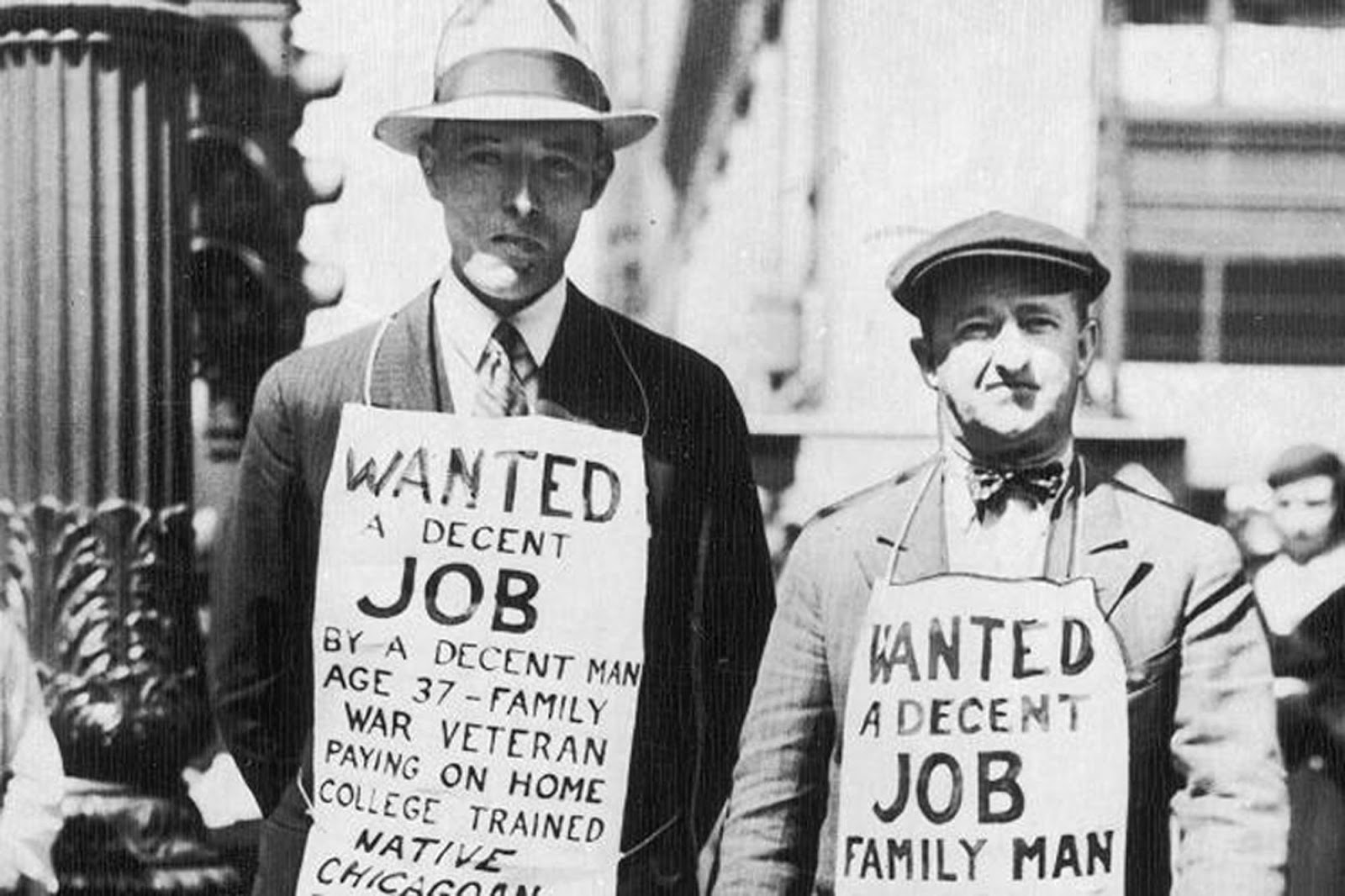 The fact is, many farms were located in the Great Plains, and due to heavy weather conditions farms were basically small. They commonly rented agricultural implements, but under the Great Depression they could not pay their debts, had no funds for further farming and logically went to bankruptcy very fast. They had neither seeds nor livestock feed. On top of all, many of them invested in stocks or borrowed money from banks; now they had lost all their money. Lots and lots of farmers were completely broke. Sometimes they sold everything they had and moved to seek for a job in larger cities where the situation was even worse.

Unemployment became very common during the Great Depression. In 1933 unemployed people in the USA numbered 15 million (8.4% of total population), however it was supposed that unemployment had reached its high earlier (around 25%). It means that during some period one forth of total employed population of the USA had no real means of subsistence. Many plants and factories tried to retain qualified personnel, but it was extremely hard to do so.

President Hoover was blamed for these events in America (as the Great Depression began during his rule); he allegedly refused his staff recommendations and economic advices and ignored the Federal Reserve System which stocks supposedly turned economy even worse. But generally, the Great Depression was a simply terrible economic crisis, which periodic repetition is immanent to the capitalist system under the circumstances where the goods and services market as well as a multi-layer and multi-level financial sector are underregulated. There is no doubt that market is important for development of any country, but the completely deregulated market may create conditions for a new crisis.

May the consequences of the Coronavirus pandemic, together with the deregulated market, create conditions for a new major depression? I do not think so. With the sufficient financial resources available, high degree of computerisation at any level and robotisation of industries, with the continuously growing market of low-cost labour and opportunities for agreements between business partners over the globe, a depression can be avoided under any circumstances, however it requires reasonable cooperation, negotiation skills and refusal of unnecessary ambitions.

And, of course, for that purpose the leaders have to listen to wise advices and comply with their undertakings in good faith.