We started shrinking from each other on orders from above

The history of mankind can be interpreted as a line of royal dynasties and wars accompanying them; as a chain of rebellions, riots, jacqueries, revolutions; as a humanity’s battle against the yoke of enslavement; as an epoch-making development from the slave-owning system to feudalism, from feudalism to capitalism, from capitalism to socialism, and so on – up to the heaven on earth.

All these interpretations, like many other representations, include both objective and subjective factors. But generally, all of them are what you would call “grounded”.

A “medical history” of mankind can also be used as one of the sufficiently legitimated historiographical approaches. Even after a formal study we can recognise that the history consists of a line of epidemics, – awfully fatal epidemics, such as black smallpox, plague, cholera, typhoid fever, tuberculosis, malaria, leprosy, influenza, and finally – COVID-19. 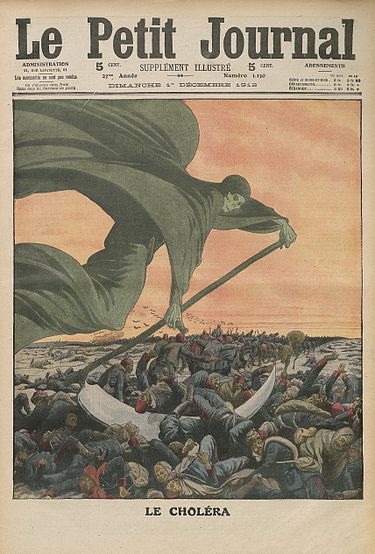 In “The Bell”, which is a part of the film “Andrey Rublev” by Tarkovsky, the grand prince cannot find a craftsman to mould the bell. Young Boriska tells horsed retainers: “The entire population died. The last one is snorting there, but he will also go to Maker soon”. Then the retainers take him along, as there are no other people to take. All of them died from smallpox. This deadly viral disease had agonised mankind over the millenniums, killing at least 40% of the total infected population. The entire provinces and regions died out. Over the centuries smallpox terrified people across continents (there are records in India evidencing the smallpox epidemics happening in the 8th century). During the 20th century black smallpox claimed the lives of over 300 million people globally. It is absolutely unbelievable.

Alexander Sergeyevich Pushkin wrote the remarkable play “A Feast in Time of Plague” as one of his “Little Tragedies”. Why “in time of plague”? Where does this name originate from? The thing is, this terrible disease, with its horrific pandemic periods, scared the history of mankind. Death rate reaches 95% at its bubonic form and 98% at its pulmonary form. At the end of the 6th century around 100 millions died globally during plague epidemic, including a half of the Byzantium population. In the 14th century the plague pandemic wiped out one third of the total European habitants, which is an equivalent of 35 million people. The latest plague epidemic was registered in Asia in 1850, but it was limited to India and China killing 6 to 10 million people there.

Many languages commonly feature the word “cholera” as an expletive. This horrible disease had remained local over the millenniums, but in the 19th century cholera developed into a pandemic which turned out to claim the lives of tens of millions around the world. It was the first time in 1816 when it happened globally, and it even reached the south regions of the USSR in 1966. For instance, Odessa saw overall panic: the city was girt in with the KGB military force to isolate the centre of infection. This happened under the circumstances where no radio or television channels or mass media disclosed the reason for it. But locals somehow got access to the information and distributed it further, feeling alarm collectively. After some time, regional newspapers mentioned something related as a reminder of the event never considered to be official.

Typhoid is another terrible pandemic disease leading to mental disorder and other adverse effects due to high fever. For example, my grandfather went blind due to typhoid experienced during the war. Only in Russia 30 million people went through typhoid during World War I and the Russian Civil War, among which 3.5 million died.

Tuberculosis has been also accompanying human beings for hundreds of years. For a long while it had been perceived as a poverty-related disease caused by excessive humidity in the room and general insanitary conditions. With this, everyone was comfortable with the fact that this disease extinguished lives of genius people who never lived in poverty: Frédéric Chopin, Anton Pavlovich Chekhov, Franz Kafka and many others.

It has been affirmed nowadays that one third of the total population of Earth has been infected with tuberculosis (bacillus Kochii), and around eight million of them get sick annually, among which two million die.

But how could I forget about leprosy? Leprosy, or lepra. Those who came before us knew it and were afraid of it long before the new era. The Bible mentions leprous persons too. Everyone is shrinking from them. Actually, this is a very dangerous contagion. That is why kisses given by Orthodox Christian saints to leprous persons symbolised very special self-sacrifice. It is considered that two million of disabled leprosy victims are spread worldwide today.

Your humble servant dives into all this horrific statistics to provide some historical data to analyse the existing panic reaction to COVID-19. By the middle of this May (meaning the period of almost six months) this Coronavirus has killed a little over 300 thousand people over the globe. The victims mostly include elderly people with a number of chronic diseases and other pathological conditions. According to the official statistics, the average age of Coronavirus victims in the USA exceeds the average age of mortality. It is impressive, especially when backgrounded by the efforts taken by the countries. I mean not only economic measures leading to the epochal crisis and sharp slowdown expressed in historically significant indicators, but also political measures defying elementary human rights: the freedom of movement, the freedom of association, the freedom of communication, the freedom of labour, and the freedom of visiting our near and dear ones.

Elon Musk, an American billionaire and entrepreneur, who vociferously opposes all these restrictions, affirms that the hysteria invading the developed countries has been originally based on a free soil. Our country leaders followed the recommendations provided by “some experts” who clearly warned that avoidance of the “voice of reason” would cause millions of deaths. They forecasted two million deaths only in the USA. The real number is eighty thousands. Mask says: “Today everyone understands that the danger level has been overestimated by an order”. In his opinion, this is why return to normal life has both sudden and irrational nature – especially when being conducted under unchanged circumstances.

It will take some time to understand the real sense of these events. It is too early to realise the content and the context of the challenge sent to us, because we started shrinking from each other, we stopped kissing our kids and grandchildren, or visit our moms and grandmothers, or offer hand to our friends – all on orders from above.

Looking through the window, like from inside the cage, hundred millions found themselves hooked into the sensation of fear of the outside world, which is basically specific to irrational beings, like those laboratory rabbits who suffer from depression, because laboratory technicians allow a fox walk around the cage. The fox does not eat them. It only shows up too often.