For orthodox Christians Christmas is, first of all, a holy day which cannot be celebrated without advent or prayer

Christmas is one of the Great Eastern Orthodox Feasts and, in the past, its preparations started early. The holiday is preceded by the 40-day advent, with praying and special preparations which are still followed by Christians today. In pre-revolutionary Russia each family assiduously kept the dramatic and interesting traditions of the Christmas celebration.

For orthodox Christians, Christmas is, first of all, a holy day which cannot be celebrated without advent or prayer. Before Christmas, the entire house was cleaned and decorated, and mistresses prepared special dishes served only for Christmas. Body cleanliness was not left without attention too: the whole family went to the Russian sauna [banya]and then took new clothes on. The table was covered with a new tablecloth.

In the Russian Empire even the most religiously unaffiliated families observed advent on the 24th of December (that is Christmas Eve).They ate nothing before the appearance of the first star in the sky which symbolized the Star of Bethlehem announcing the Saviour’s birth to the Magi. After seeing the first star, all family members came to the table and congratulated each other on the Saviour’s birth, wishing for wellbeing and kindness. Christmas Eve was a quiet, devout period.

The word “Eve” (or Sochelnik in Russian) arises from the name of the main course eaten on Christmas Eve: sochivo [soaked grains]is a specific porridge made of wheat, barley, bread corn and buckwheat and mixed with honey, almond and poppy seed. Sochivo commemorates advent and is based on ‘Daniel and the Three Children’. Daniel ate seeds of the earth in order to avoid heathen food (Daniel 1:8), and the dish symbolizes germination and a new lease of life. Another mandatory dish to be prepared on Christmas Eve was vzvar (or ouzvar) – this is a compote or light jelly made of dehydrated fruits. Ripe fruits used in preparation of the vzvar symbolize complete maturation, the end of life. In rural families some velour grass was put under the Christmassy tablecloth to symbolize the manger where the Saviour was born.

The day before Christmas, the night service and the Great Compline are given in the Orthodox church to commemorate the Prophecy of the Saviour’s birth. At about midnight, Matins starts according to the Great Feasts rite, during which one of the most beautiful Orthodox canons ‘Jesus Christ is coming soon’ is performed. Then the Divine Liturgy of John Chrysostom is given.

In pre-revolutionary Russia the majority of people visited cathedrals on Christmas. Sometimes it was not easy to enter churches located in major cities (for the Carol service) due to the crowds of people. Private churches which were maintained by various institutions offered special tickets to avoid the crush of the devout.

Advent was finished with Christmas and followed by Christmastide (which continued till the 6th of January, Epiphany); at that period Christians celebrated Jesus Christ’s birth, had fun, and visited each other. In those days no one locked the doors: everyone was invited in to come to the table; at times there were guests who survived on little food. A bonive filled with porridge, stuffed hog’s head, cow’s heel and pork trotter jelly, pancakes, roast goose filled with apples, pastries, small white loafs, homemade sausages, mushroom dishes, vegetable and meat pies, baked fish and many other satisfying and tasty dishes were on offer in those days.

Christmas carols (or kolyadki, – special Christmas songlets, known to us from classics) celebrated the Saviour’s birth and contained wishes for happiness and sufficiency. Natives of Moscow never used the verb “carol”, they applied their own term “praise”. Each family welcomed carollers by preparing a meal for them in the form of treacle cakes which were shaped into the head of a goat [kozulya]or a cow symbolizing animals who were present at the crib at the moment of the birth of Jesus Christ. During Christmastide, people usually clothed themselves in animal costumes, played in the streets, rode horses, woke sleeping people from their slumbers, went door to door, congratulated each stranger on the lengthening day, sleighed and organized snow battles. Prior to the revolution, the 25th and the 26th of December, the 1st and the 6th of January were non-working days.

The tradition of decorating the Christmas tree came into being in the 1830s during the époque of emperor Nickolay I. The tree was decorated with treacle cakes, sweets, gifts, ribbons and candles. Children were allowed to take any gifts and sweets from the tree. In noble families the second and the third days of Christmastide were supported with huge children’s parties. During the époque of emperor Alexander III, another tradition came into being: the emperor’s family members visited Christmas shows, and the emperor personally congratulated soldiers, Cossacks and the lower-ranked officers amongst the guards of the emperor and the Palace police. The tradition of sending Christmas greetings written on postcards (open letters) appeared even later, in the 1890s only.

By the end of the XVIth century, Russia accepted another tradition from Poland: the first crèches (the original Russian word vertep arises from the Old Slavic word meaning a grot). These special puppet shows demonstrated the mystery of the birth of Jesus Christ. Puppets were cut from the wood and were very simple in terms of shape, and the crèches were cheap and available to peasants. That was the reason why originally they were organized in the countryside, and only later were adopted in the cities (mainly by merchants’ families). Rich houses organized crèches in the backyard, as this kind of entertainment was perceived as a play for country bumpkins but not for ladies and gentlemen.

But what about New Year? How was it celebrated? Actually, New Year’s day was important in terms of chronology only, but not as a holiday at which the family gathered round the table. Originally it was celebrated very quietly, people visited a church for a service to thank God for all the good things that had happened during the past year, and to pray for wellbeing in the coming year. Gifts were presented on Christmas preceding New Year’s day. New Year was celebrated by the Russian authorities prior to the époque of Peter the Great too, but the dates varied – either the 1st of September or the 1st of March. Finally, Peter the Great approved his decree on 15 December 1699 and ordered that it was necessary “to stop muddling people” (because in different locations, the new year started in different months), and to start celebrating New Year everywhere on the 1st of January. So, the spontaneously chosen day was the one already adopted in Western Europe and it carries no special [religious]meaning.

By order of the emperor, the New Year was to be honoured by decorating trees, and with merry parties for both children and adults.

Notwithstanding the Tsar’s order to have fun on New Year’s day, the holiday took root with difficulty. Decorating New Year trees was adopted 130 years later and was accompanied with New Year Balls for noblemen. Good wishes were commonly sent at Christmas and children enjoyed themselves and sleighed down hills during the whole of Christmastide.

Celebration of New Year as the main holiday of the year in Russian consciousness took root after the establishment of the Soviet regime. Actually, this new all-Russian holiday overtook and replaced Christmas which continued to be celebrated by Christian families only. 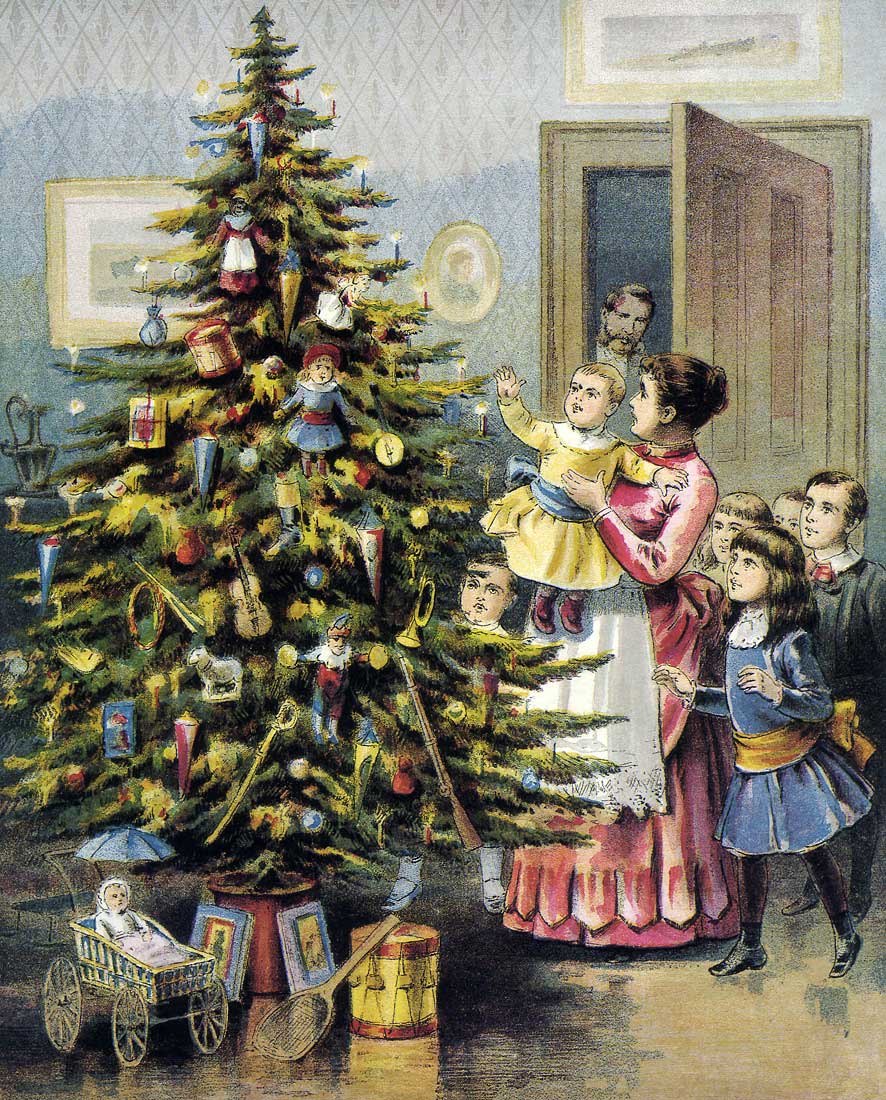 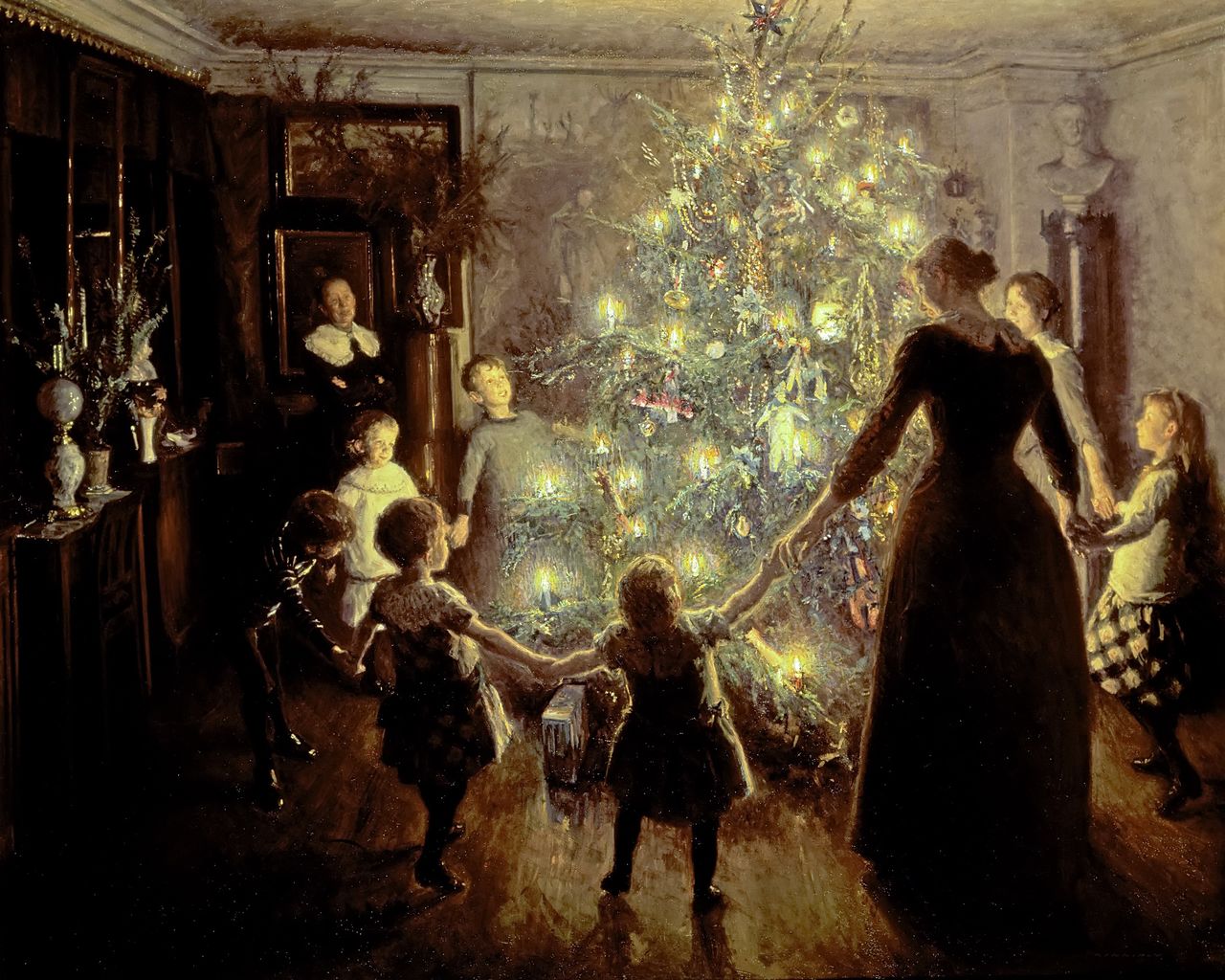