Born on 21 April 1926, Her Majesty The Queen celebrates her 95th birthday in 2021. Currently the world’s longest reigning head of state and the longest reigning monarch in British history, she has overseen a period of extraordinary change. Throughout, The Sovereign has remained a symbol of quality and stability.

With a record-breaking reign characterised by unprecedented achievements and milestones, it’s hard to believe that Her Majesty was once a princess that nobody ever expected to become queen.

Born third in line to the throne, it was due to her uncle’s abdication and the unexpected loss of her father that she found herself being crowned at 25. However, Her Majesty very quickly earned a place in the hearts of the people throughout the United Kingdom and the Commonwealth, thanks to her earnest commitment and devotion to her people.

The Royal Mint has struck every UK coin of The Queen’s reign, from the first ones that marked her coronation to the coinage of an experienced and much-loved monarch. The year 2021 signifies a personal milestone for Her Majesty and Royal Mint be celebrating with the nation as the Queen turns 95, making her the first British monarch to reach such a grand age. The coin’s reverse, designed by Timothy Noad, is a floral tribute, featuring The Queen’s own words, ‘My heart and my devotion,’ as the inscription.

“Her Majesty The Queen is well-known as a lover of flowers and gardens. I like the idea that a posy or bouquet is often presented to The Queen, perhaps on her birthday, and that this could be a tribute from the four nations of the United Kingdom. I wanted it to look suitably royal but with an element of informality for the personal nature of the occasion. I also enjoy gardening, which I find relaxing and creative as well as an inspiration for my work,” said Timothy Noad.

“I wanted to create a tapestry-like effect, with the Royal Cypher standing out against a dense, circular mass of leaves and flowers. I originally experimented with using spring flowers but eventually settled on the national floral emblems, which are tried and tested in coin designs and clearly connect The Queen to the four UK nations. For this design, I made the flowers more naturalistic and less formal than usual. I also felt that Her Majesty would prefer to be given a daffodil flower than the more heraldically correct Welsh leek!”

This year’s coin has 95 mils, which is a change from the number normally used on sovereigns of Elizabeth II – each symbolising a year of The Queen’s life. Another exception is 1957 and sovereigns of this year have significantly more mils than those struck after this date. The 2021 Sovereign will also feature a unique privy mark – a Royal Crown with 95 entwined.

The 2021 Sovereign retains Pistrucci’s St George design, which is revered as one of the greatest works of numismatic art. The Royal Mint ensures that each Sovereign is struck to the proof standard that built the Sovereign’s iconic reputation. 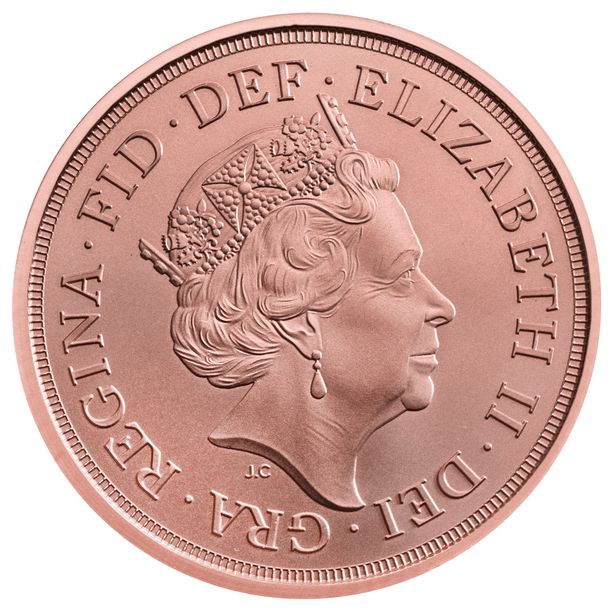 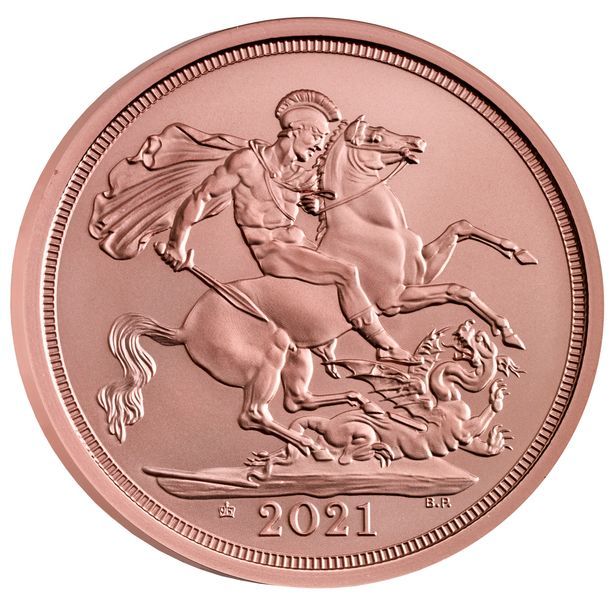 Clare Maclennan, Divisional Director of the Consumer Division at The Royal Mint said, “The launch of the annual Sovereign Collection is eagerly anticipated amongst coin collectors and this year we mark a very special royal occasion as we celebrate Her Majesty the Queen’s 95th Birthday. To celebrate this remarkable milestone, the 2021 Sovereign will include two extra special elements – a unique privy mark and a change to the milled edge of the coin. The unique privy mark represents the royal cypher crown with the number ‘95’ to mark the celebration of Her Majesty’s 95th birthday. As a classic symbol of royalty, the crown makes a fitting choice for this extraordinary moment in British royal history.”

During the 19th century the Sovereign was known as ‘the chief coin of the world’, while its role has changed over the years that followed, it maintains a global reputation for accuracy, reliability and quality.

When Elizabeth II was officially proclaimed queen, thousands of people lined the streets to catch a glimpse of their young queen, while millions more watched the ceremony on television. It was the perfect moment for The Royal Mint to welcome the return of The Sovereign coin, marking the historic occasion by striking a handful of Sovereign Proof sets. From the limited striking of the Proof coin sets, one was gifted to the British Museum and another to the Royal Collection. One set was kept at The Royal Mint Museum, where it remains in the collection today, along with the pattern pieces and the original dies. This special striking heralded the return of The Sovereign coin. Just a few years later, in 1957, the highly regarded gold coin was also struck as bullion, becoming the flagship coin of The Royal Mint, famous across the world as a symbol of quality, accuracy and a masterpiece of design. For this reason, The Sovereign was also stockpiled as an emergency ransom fund by the military during the 1950s, in case of war in the Middle East.