Exactly three months to the day after his flight in Vostok I had ushered in a new age of space exploration [i.e. 12 July 1961], the trim figure of Yuri Gagarin strode down the gangway of a British Viscount airliner and walked briskly out across the runway of Manchester airport towards a sea of expectant faces, and flashing camera bulbs.

Heavy banks of cloud had obscured the aircraft’s final descent, and a ferocious downpour had lashed the tarmac, soaking the top hats and tails of the waiting dignitaries. However, what the rain could not dampen was the warmth of Gagarin’s smile and the raw enthusiasm of the crowds who thronged the concourse: pushing at the safety barriers and seizing every vantage point in an attempt to catch a glimpse of their hero.

The sheer scale of public enthusiasm for the visit, which came at the height of the Cold War, had elsewhere caught the authorities by surprise. The Macmillan government, which had initially been reluctant to invite the cosmonaut to Britain, hastily added an extra day to his schedule and offered a grudging official sanction to what had originally been conceived as a trades union- sponsored tour, aimed at promoting economic co-operation between the East and West.

Although Whitehall chose to remain aloof, the situation in Manchester was very different.

Gagarin’s visit to the city had been organised in advance, under the auspices of the local trades councils, and had received the blessing of the civic leaders who were only too happy to organise a lavish reception for him at the Town Hall. As the rain cleared, the Red Flag fluttered beside the Union Jack over Albert Square and a brass band struck up the national anthem of the U.S.S.R. to welcome the arrival of the first cosmonaut.

Against the background of the Berlin crisis, the escalating conflict in Vietnam and the abortive American invasion of Cuba, this spontaneous outpouring of popular sentiment in honour of a Soviet airman, acting as an unofficial ambassador, may at first sight appear incongruous. However, upon closer inspection the reasons behind the genuine warmth of Gagarin’s reception are not hard to discern. In marked contrast to the ageing Soviet leadership, Yuri was young, dynamic and glamorous. Possessing an unaffected charm and an outgoing personality, his fame rested securely on his own bravery, skill and athleticism.

As a result, he appealed equally to both men and women, the young and the old. Small children dressed up in home-made space suits, and stayed away from their lessons in order to wave at him from street corners. Teenage girls crowded the platform constructed for him at Trafford Park, and surged through the police lines which surrounded Ringway airport and the union offices at Brooks Bar, anxious to obtain an autograph, to present a bouquet of flowers, or to steal a kiss. Seasoned factory workers rushed to shake his hand or to slap him on the back, stumbling over their words of praise, while outside their training ground the United team broke off their practice to wave at the “Magellan of the Cosmos”. 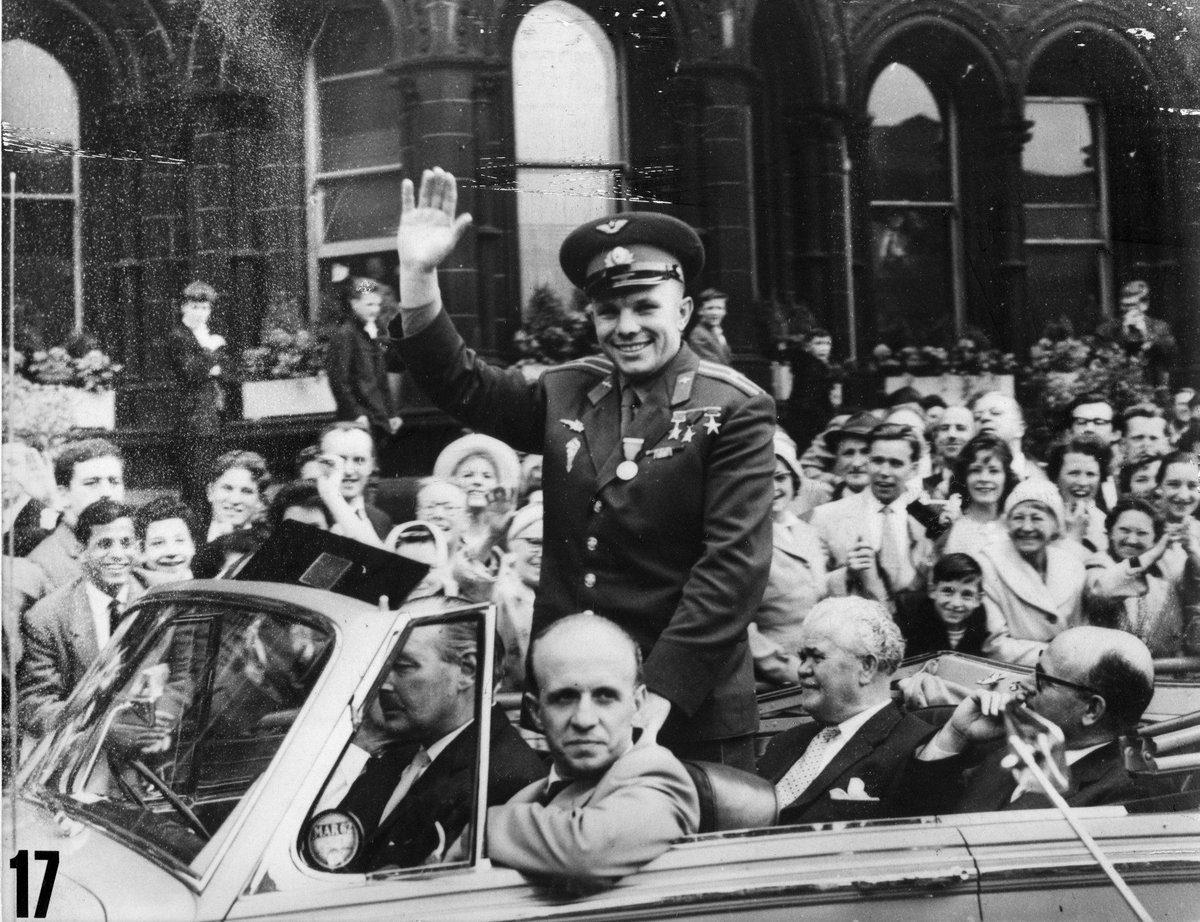 After the drab years of post-war austerity, there seemed something almost magical about the first human being to have broken the bounds of the earth and viewed ‘through the portholes [of his spaceship]… a diamond-field of shining, bright, cold stars.

Mary McClellan, who had travelled up to the rally at the Metro-Vickers plant that morning, thought that in contrast to the grey suited businessmen and the dark overalls of the factory workers Gagarin cut an ‘unbelievable’ figure in his bright green uniform; and that he looked as though he had been filmed in ‘technicolour, thrown into a stark contrast by the monotone which surrounded him. In an age before the Beatles, when rock music stood on the flimsiest of foundations and the role of the pop singer was still ill-defined, the first man in space was guaranteed a status normally reserved for visiting royalty and Hollywood film stars.

The young Martin Kettle plastered pictures of Gagarin on his bedroom walls, while in the pages of the Times one correspondent captured the feelings of many, for whom ‘space-men have been the wildest fiction’, the stuff of popular novels, comic books and radio programmes until suddenly ‘one morning, this fantastic fiction’ had become scientific fact. Who, he asked, ‘would not…walk a few hundred yards to see this incredible’ man, who ‘visits us and talks to us.

If Gagarin’s popularity with the people of Manchester was undeniable, then the nature and long-term political significance of his visit was still in doubt, and was to be hotly debated over the course of the next few weeks, in the pages of the local and national press. Commentators, from both the left and the right, were agreed that the tour had done little to alter the domestic political landscape, to remove deeply held prejudices, or to prompt a thorough-going reassessment of Britain’s Cold War alignment.  However, the prestige of the labour movement as a whole, and the Foundry Workers’ Union in particular, had been greatly enhanced by the presence of the youthful cosmonaut. Gagarin was a potent symbol of the power of organised labour and socialist thought.  Born into a peasant family, he had served his time as a foundry apprentice before finding fame through his own efforts, and sustained hard work. As both the product and expression of all that was best in the mature Soviet system, he seemed to represent the embodiment of the new ‘Socialist Man’ and delighted his audience at the union offices by declaring that he was ‘still a foundryman at heart’.  Presented with the honorary membership of the Foundry Workers’ Union, and a medal bearing the hopeful inscription ‘Together moulding a better world’, Gagarin paid tribute to ‘a union which ranks among the oldest in the world and has such fine traditions’, before wishing its members ‘every success in…championing working class rights and interests, and working for a world of peace.

These sentiments were expanded upon during his address, later in the day, to the workforce at the Metro-Vickers factory: then the largest industrial plant in Western Europe. Skilfully circumventing many of the most intransigent problems created by the Cold War, Yuri stressed the need for arms reduction and peaceful co-operation in pushing forward the boundaries of science and technology, and in pursuing a policy of understanding the detente. He explained that ‘Although only one person was aboard the spaceship, it took tens of thousands of people to make it a success. Over 7,000 scientists, workers and engineers just like yourselves were decorated for contributing to the success of the flight’, and concluded to the sound of thunderous applause that ‘There is plenty of room for all in outer space … I visualise the great day when a Soviet spaceship landing on the moon will disembark a party of scientists, who will join British and American scientists working in observatories in the spirit of peaceful co-operation and competition rather than thinking on military lines.

In reflecting these aspirations, Gagarin struck a chord with a workforce who lived under the constant threat of thermo-nuclear war and attempted to capture something of the spirit of Khrushchev’s new, more open and vibrant U.S.S.R. That the dreams of rapprochement and socialist advance, cherished by the Soviet premier and his protege, were ultimately to evaporate amidst Kennedy’s blockage of Cuba and a return to the arms race, was by no means clear in the summer of 1961. The subtle manner in which Gagarin’s visit to Britain had been handled – as opposed to the heavy handed treatment afforded to his later and quite disastrous mission to Gomulka’s Poland – ensured that the reputation of the U.S.S.R. probably stood higher with the British public at that moment than at any point since May 1945, while the order books of the Soviet firms who exhibited at Earls Court were filled in record time by their anxious commercial rivals.

Khrushchev had scored a valuable public relations success in the West, while for Gagarin himself, the visit had been nothing short of a triumph: confirming his diplomatic skills and conferring upon him a political role which had not yet become onerous. Yet perhaps the most durable effect of his visit to these shores, and the one which Gagarin would probably have been best pleased with, was the sense of idealism and hope which he had inspired in the hearts and minds of British working people. This, at least, was enough to transcend the harsh realities of the Cold War era and to signal a better way ahead.