There was something bewitchingly pleasant, unofficial, unpompous in the appearance of this amazing person

April 12, 1961. It was a normal working day. Parents were not at home, they were working. The weather was slushy in April. The football ground in the yard looked more like a swamp and the game did not go well…

Our neighbour Uncle Senya, a severely shell-shocked war veteran, did not work due to his disability, but sat near the open window in his kitchen on the ground floor, and constantly listened to the radio. Usually, he ignored us. But this time he shouted:

We immediately ran to his window and began to listen, of course, having no clue. After listening to the news, he turned off the radio and began explaining us something about space, rockets, about the fact that our citizen Yuri Gagarin looped the Earth. I do not know whether we understood anything or not, but I remember how everyone, as one, looked up at the cloudy rainy sky with their heads up. I think, we stared for a couple of hours, until our grandmothers called us to dinner.

It is difficult to imagine today what a global event the first manned flight into space was! And this man turned out to be an ordinary Russian guy Yuri Gagarin, a young officer of the Soviet Air Force with such a good face and a pleasant smile. The other day, no one in the world knew that he existed on the globe, but then his photograph appeared on the front pages of the world’s largest mass media.

It also should be noted that the times were paradoxical then. On the one hand, the Khrushchev thaw, de-Stalinisation, liberalisation of intellectual and cultural life in the USSR. On the other hand, the aggravation of the all-encompassing competition between the USA and the USSR, which will lead to the construction of the Berlin Wall and the Cuban Missile Crisis just a year after Yuri Gagarin’s flight. The Cuban Crisis put the world on the very brink of nuclear war.

Two years before Gagarin’s flight, in 1959, Khrushchev made his historic visit to the United States. Looking at the photographs in the American media covering his visit, one is simply amazed. Nikita Sergeevich was so relaxed and plain that the then largest magazine Life shot him as if he were a movie star, but not the leader of the enemy state. Yes, there was something extravagant, spontaneous in Khrushchev’s behaviour, and it was unlike the way the superpower leader behaves in the minds of the average man. His unusual appearance, embroidered shirts, strange hats, straight and even rude statements made the “premier” Khrushchev (that is what he was called) a star of the then emerging pop culture.

After that notable trip, the task of “catching up and overtaking America” became a true fix idea of Soviet propaganda. Even in cartoons, the “Soviet boat” was catching up and overtaking the “American boat”. “Corn – the queen of the fields” was also an “imported idea” brought by Khrushchev from the United States. But it was all for internal use. In the global arena, there was a struggle for spheres of influence, or rather, for the redivision of the world. Redivision is impossible without ideological confrontation and an arms race. The struggle for primacy in space exploration combined these two aspects: military technologies for building rockets, primacy in the field of science and the media and political exploitation of the fulfilment of the human dream of conquering the vast expanses of space. 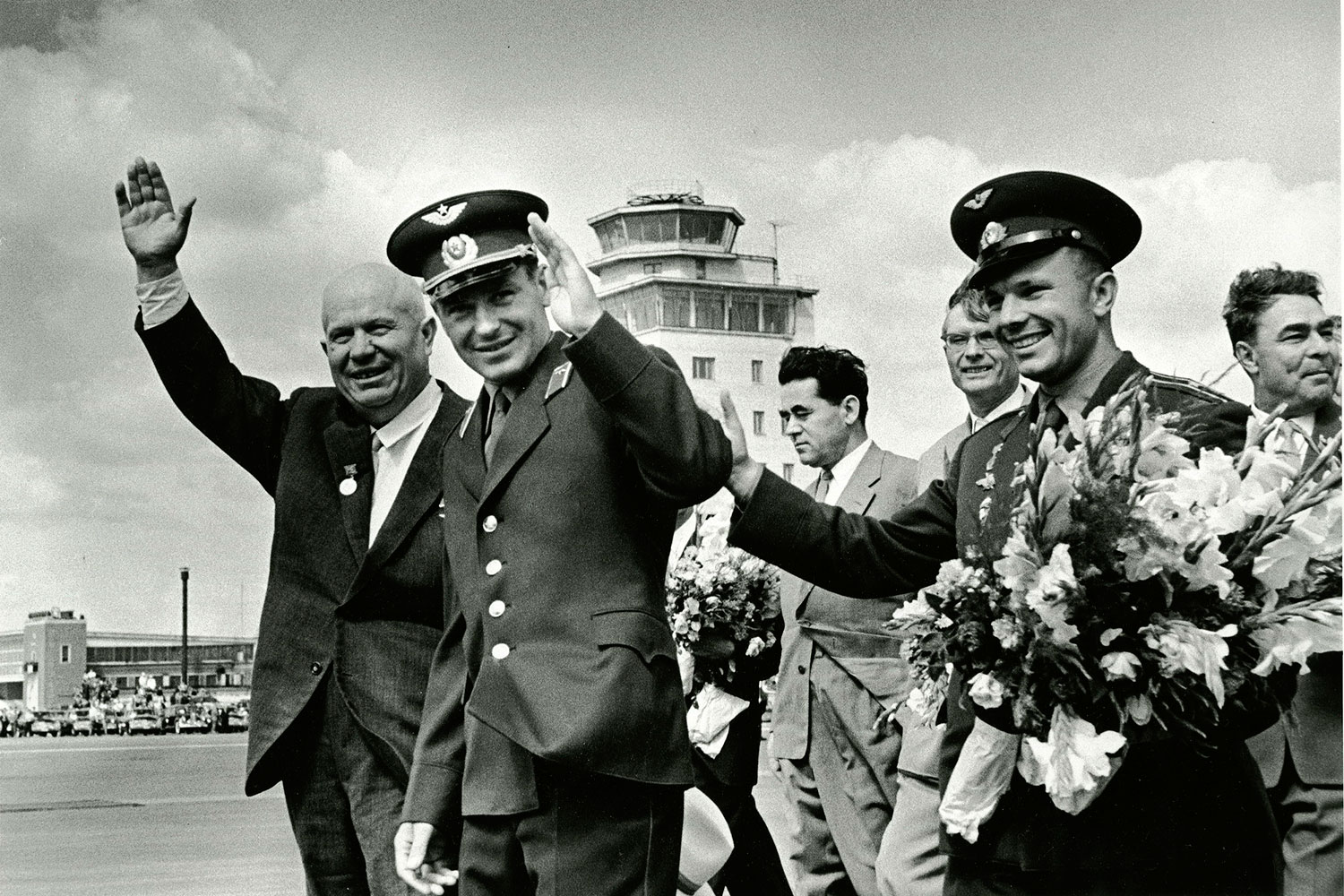 The fact that the Soviet Union overtook the United States, became clear as early as in 1957, when on October 4, the first artificial satellite of the Earth was successfully launched from the 5th Field Research Facility of the Soviet Ministry of Defense (later called the Baikonur Cosmodrome) by the Sputnik carrier rocket. Its appearance and small size impressed the imagination of people so much, that the simple Russian word “satellite” became a brand, a trademark: The Sputnik, Le Spoutnik, etc. It weighed only 84 kilograms with the maximum diameter of 58 centimetres only. But the prestige of the USSR grew with each rotation of Sputnik around the Earth. The Communist idea conquered the minds of thinking people, no longer as a utopia, but as a reality. World tours not only of the Bolshoi Theatre, but also of the Red Banner Song and Dance Ensemble of the Soviet Army took place with a full house in London, Paris and Brussels. A wonderful film “The Cranes Are Flying” by Mikhail Kalatozov (by the way, also screened in 1957) was awarded in 1958 the Palme d’Or which is the highest award granted at the prestigious International Cannes Film Festival.

Just 10-15 years after the crushing victory over Nazi Germany, the Soviet Union, which had risen from the ruins, declared itself as a country where not vulgar-commercial, but truly classical, elite and at the same time real folk art flourishes.

Space exploration should be viewed from a cultural perspective, especially in its early, romantic stage of development. Space is the dream of humanity. Our most ancient ancestors, in the most prehistoric times, looked at the sky with horror and admiration, as is poetically evidenced by the mysterious statues on Easter Island. Strange stone idols mystically gaze into the sky, as if expecting someone’s arrival. Likewise, Tycho Brahe and Johannes Kepler, astronomers and progenitors of space exploration, were staring at the heavens. And Konstantin Eduardovich Tsiolkovsky too. I do not know, was it intentionally or not, but the launch of Sputnik coincided with the centenary of the birth of that great Russian and Soviet scientist. Tsiolkovsky, like Brahe and Kepler, was a scientist and thinker being ahead of his time. As a promoter of the idea of space exploration, Tsiolkovsky, back in the 1920s, came to the conclusion of deploying “rocket trains” – in fact, they were prototypes of today’s multistage rockets. At the same time, he comprehended the problem of human survival in weightlessness during long space flights. It is also remarkable that the basis of Tsiolkovsky’s works putting him ahead of everyone and everything and being fantastic at the time, included nothing more than mathematics with attempts to use the “mathematical apparatus”.

He wrote a report asking for admission to the group of cosmonaut candidates at the age of 25. The selection was strictest. Initially the detachment was supposed to include 20 people. The candidates were selected by a special group of specialists from the Central Military Research Aviation Hospital. Psychologists noticed that “Gagarin loves performances in which heroism, the will to win, the spirit of competition prevail. In sports games, he takes the initiative, leadership, captains the team. His favourite word is “work”. He is self-confident. He takes workouts in his stride. He is educated very harmoniously. Sincere. Persevering. Does not hesitate to defend the point of view, which he considers to be correct”.

Sergei Pavlovich Korolev, the chief designer being responsible for the entire space program of the USSR, was in a hurry. Because, according to Soviet intelligence, the Americans intended to send a man into space on April 20. Knowing this, he scheduled the launch no later than April 17, 1961 (in fact, the first American John Glenn flew into space almost a year after Yuri Gagarin.)

Due to the lack of time during creation of the Vostok-1 spacecraft, a number of extraordinary decisions were made. For example, they had to abandon the emergency rescue systems at the start and soft landing of the ship. In addition, a redundant brake system was removed from the design.

During the flight, which lasted 1 hour and 48 minutes, Gagarin conducted the simplest experiments: he ate, drank, and made notes with a pencil. His feelings and everything that he saw through the window, he recorded using the onboard tape recorder. 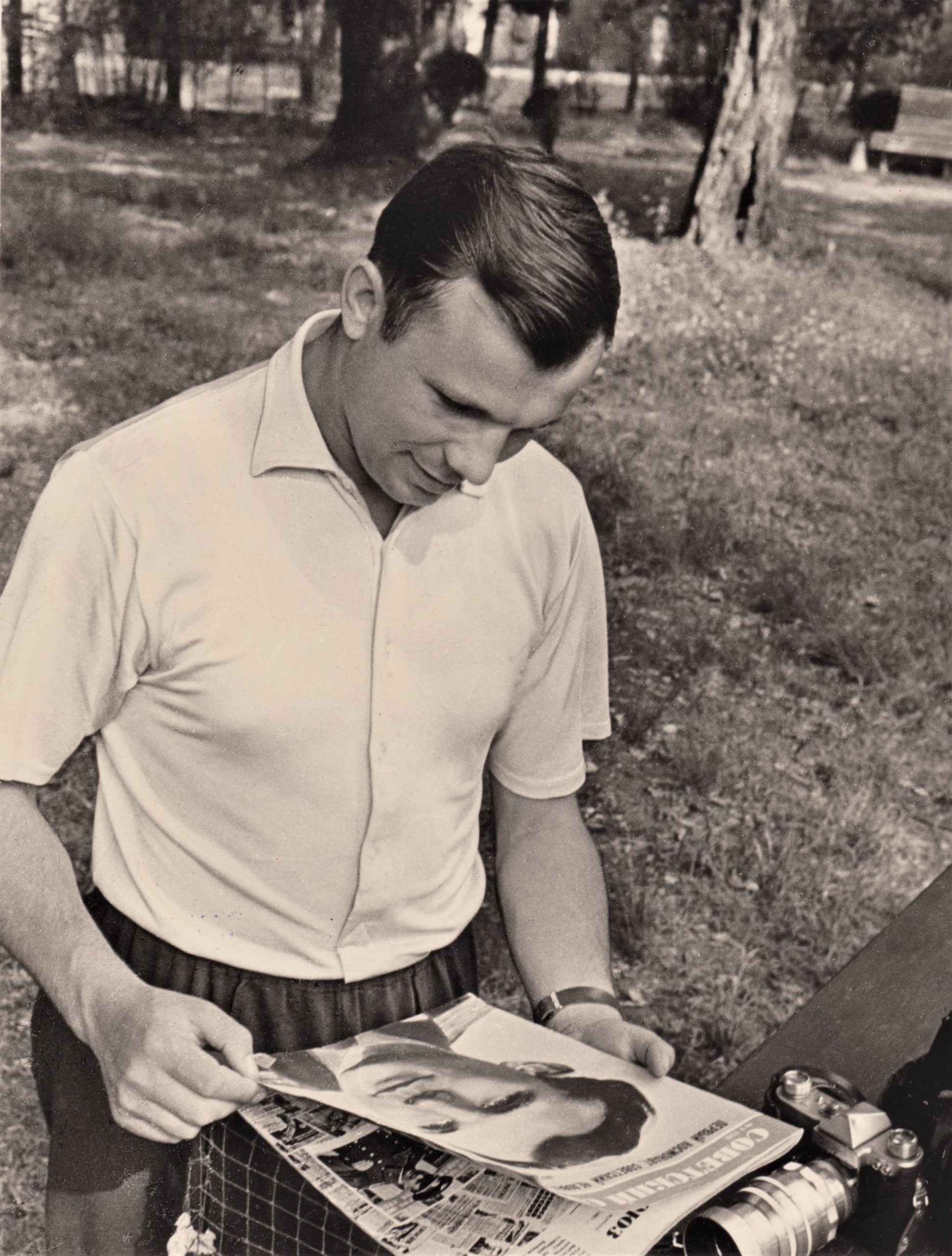 The return to Earth turned out to be so unusual that it is impossible to miss talking about it. The first people who met the cosmonaut after the flight were the forester’s wife Anna Takhtarova and her six-year-old granddaughter Rita. The military officers and local collective farmers arrived at the scene soon. One group of military men took the descent vehicle under protection, and the other took Gagarin to the location of the unit. From there, Gagarin reported by phone: “Please, tell the Air Force Commander: I have completed the task, landed in the specified area, I feel good, there are no bruises or breakdowns. Gagarin”.

A helicopter immediately took off from the Engels airfield and easily found the descent vehicle, but the cosmonaut was not nearby. The officers were informed that he left in a passing truck. The helicopter immediately set off in pursuit and easily caught up with the truck moving along the bumpy road. Hearing the rotor of the Mi-4, Gagarin jumped out of the cockpit and waved his hands. Just like in the movies!

Due to the maximum level of secrecy, the launch of Gagarin into space was not previously covered. All the wonderful shots that we saw and loved were not filmed on April 12, 1961, but post factum, especially for newsreels. He repeated before the cameras everything that he really did.

In Moscow, Gagarin was received with unheard-of fanfare. Khrushchev was waiting for him at Lenin’s mausoleum. The cosmonaut drove up in an open ZIL car and marched to the steps leading to the podium of the mausoleum. Soviet television did not show these shots, because the hero’s lace was untied on his right boot. The footage clearly shows how it dangles, which, in my opinion, is very touching! This unique chronicle was shown many years later, during the times of glasnost and perestroika. That record is widely available today.

The uniqueness of Yuri Gagarin’s personality also lies in his simplicity. There was something bewitchingly pleasant, unofficial, unpompous in the appearance of this amazing person. Having become an unprecedented world star, he continued working. No one could have imagined that he continued flying, put his life at risk again testing new aircrafts.

Yuri Gagarin died in a plane crash on March 27, 1968. To investigate its causes, a special State Commission was established. The colossal report in 29 volumes was classified. It is only known with certainty that the MiG-15UTI plane collided with the Earth and the crew was killed.

The fate of Yuri Gagarin is like the life of ancient Greek mythical heroes – people who performed heroic deeds simply doing their duty. And their fate inspires subsequent generations.