The Red Star Line was a legendary shipping company, which carried 2.6 million passengers – mostly from Central and Eastern Europe – from Antwerp to New York and Philadelphia. Next year, the company will be celebrating 150 years since it was founded in Philadelphia in 1871, as a joint venture between Americans and Belgians.

In September 2013, the Red Star Line Museum opened in the historic warehouses of the Red Star Line shipping company in Antwerp. Visitors to the museum can embark on a moving journey, retracing the footsteps of emigrants such as Irving Berlin, Albert Einstein and Golda Meir. The museum focuses on the stories of these passengers. The old warehouses on the banks of the river Scheldt have been developed into a commemorative site and museum, a topical place for reflection with a contemporary approach to emigration.

Many, if not all, of the passengers that travelled by The Red Star Line from Europe, have contributed to American society. Some of them went on to achieve great things.

The physicist Albert Einstein, whom Time Magazine proclaimed ‘Man of the Century’ in 2000, was a regular passenger on the Red Star Line. Einstein was Austrian by origin and lived in Berlin, but he had family in Antwerp and was a good friend of Queen Elizabeth of Belgium, the painter James Ensor and other Belgian personalities.

In the summer of 1932, the Reichstag elections made Hitler’s Nazi party the largest in Germany. This was followed by violent riots and Einstein, who had called for resistance to the Nazis, was advised to leave Berlin until calm was restored. He travelled to Belgium and while there decided to take up the offer of a part-time appointment at the Princeton Institute for Advanced Studies. His intention was to divide his time between Germany and America.

When Hitler came to power in Germany on 23th March 1933, Albert Einstein and his wife Elza Koch were on their way back from the United States to Berlin. While onboard the Red Star Line’s Belgenland he learnt that the Nazis had confiscated all his possessions and had unleashed a proper witch-hunt against the Jews. They decided it was not possible for them to return to Germany. After the Belgenland arrived in Antwerp (March 28th, 1933), the couple travelled on to the Belgian coast. Queen Elizabeth was fearful for Einstein’s safety and ordered the gendarmerie to keep him under constant protection.

All this fuss about him did not prevent Einstein from giving several talks and receiving friends such as the painter James Ensor and the writer Aldous Huxley. It was probably the Nazis’ murder of Professor Theodore Lessing in Czechoslovakia on August 31st 1933 that convinced Einstein of the danger he was in. Shortly afterwards he left as inconspicuously as possible for London. A few weeks later Elza also left Belgium, via Antwerp, on board the SS Westernland. Einstein himself boarded the ship in Southampton to accompany his wife to America. They sailed into New York on October 17th 1933. 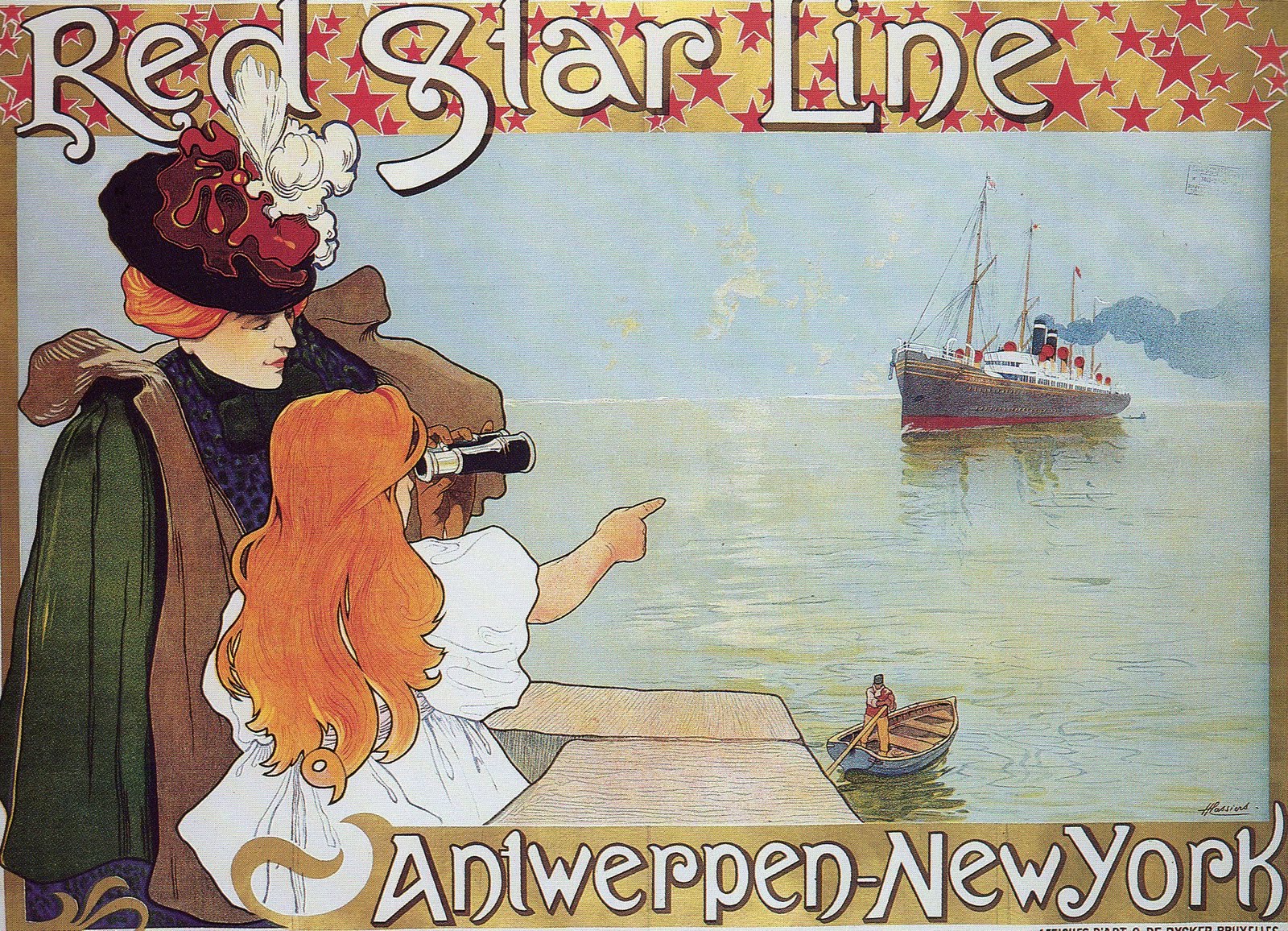 Among the two million Europeans who traveled to America on the Red Star Line was a five-year-old boy from Russia. That boy’s name was Israel ‘Izzy’ Beilin, and he would grow up to gain worldwide fame under the name of Irving Berlin with songs like White Christmas, Puttin’ on the Ritz and There’s No Business Like Show Business.

“My father didn’t take off by himself,” says Mary Barrett, Irving Berlin’s daughter, who still lives in New York. “He traveled with his parents, five sisters and a brother. They had fled to Antwerp from Tyumen, a little village in Eastern Russia on the border with Siberia. Their house had been set on fire during the pogrom of 1893 – the violent persecution of Jews, which caused hundreds of thousands of Russian Jews to flee. Many went to America.”

During the great crossing little Irving got a tangible reminder of his Red Star Line adventure. “A passenger on a higher deck accidentally dropped his pocket knife,” Mary relates. “It landed on my father’s forehead and left a scar. He often showed it to me. He seemed to be proud of it: it reminded him of his European roots.”

Antwerp painter Eugeen Van Mieghem (1875–1930) grew up in the heart of the old port. His parents had a cafe right next to The Red Star Line warehouses. Looking out of his window and wandering around the area, Van Mieghem saw thousands of emigrants leaving for the New World: East European men, women and children – principally Russian and Polish Jews – with a few paltry possessions on their back. He illustrated them in a moving way, creating a vast body of work and a truly unique time capsule.