Beethoven’s self-awareness made him a ‘modern’ artist and individualist.

He was radical in his tireless quest for artistic renewal, a man who shunned compromises. His works, many of which became pivotal creations of music history, also form the heart of the 2020 Jubilee programme, as does his influence on generations of composers and performers, up to and including current world premières.

Beethoven’s era was an age of social and cultural upheaval, which also left a mark on his artistic self-image. Although he came from a family of court musicians and sought a court appointment to the end of his days, he lived in Vienna as a freelance artist, with all the attendant benefits and drawbacks. And although musicians before him had been called ‘geniuses’ – especially Beethoven’s assiduous and successful teacher Joseph Haydn – the notion of originality took on an entirely new quality in Beethoven’s case.

To the outside observer it is already evident in the quantity of works Beethoven composed. If Haydn wrote more than 100 symphonies and Mozart more than 40, Beethoven managed no more than nine. Instead of roughly 100 operas from Giovanni Paisiello, more than 40 from Antonio Salieri and over 30 from Joseph Weigl, Beethoven wrote only one. Even if we attribute this to his lack of institutional connections, his reduced output compared to his immediate predecessors and contemporaries had direct consequences both for Beethoven himself and for his subsequent image and reception. He became a composer who produced works with enhanced claims to artistic stature, and accordingly his audience and posterity likewise placed higher expectations on his music.

The lofty status of the unique work of art still dominates our view of artistic creation. Equally dominant is a notion of artistic radicality that goes beyond the fulfilment of predefined strictures. Both these factors stand out markedly in Beethoven’s case.

His self-image as a ‘modern’ artist became manifest at least shortly after the turn of the 19th century, when he struck out on a self-proclaimed ‘new path’ in composition with the so-called Tempest Sonata. He thereby explicitly defined himself as a composer, as opposed to a conductor or virtuoso who also composed. In October 1802 he wrote to his Leipzig publishers Breitkopf & Härtel that he had composed two sets of variations, ‘both of which are worked out in quite a new manner, and each in a separate and different way’. A few sentences later he again stresses that ‘the manner of both works is my own and entirely new’. From this moment on the emphasis lay on the creation of individual or ‘new’ works of art; lesser or occasional pieces frequently became marginalized, especially by posterity.

Many of Beethoven’s works became pivotal to music history. Artists and concert organisers will return to them again and again, not only in our Jubilee Year. Others, though less well-known today, may be considered central to Beethoven’s life and creativity. Among them are Wellington’s Victory or the early Righini Variations not to mention his many arrangements of Scottish, Irish and Welsh folk songs. They, too, will be taken into account in our Jubilee, departing from the established canon and giving audiences an opportunity to discover the unknown Beethoven in 2020.

Beethoven’s musical impact on subsequent generations was enormous. Schubert and Schumann took up his idea of a song cycle; Schumann and Mendelssohn drew on him for their conceptions of a symphony. So did Brahms, although at first he felt Beethoven’s legacy to be a burden, as if he always heard ‘a giant marching behind me’. Liszt was inspired by Beethoven to produce countless arrangements, and Wagner called the Ninth Symphony the forerunner of his concept of the Gesamtkunstwerk – the complete work of art.

The artistic adaptations inspired by Beethoven’s works are virtually impossible to count. Even during his lifetime his works were recast for different instruments. Beethoven himself was actively involved in this process: the original prints of his Seventh and Eighth Symphonies were accompanied by no fewer than seven versions for various combinations of instruments. Altered instrumentations of this sort allowed the works to appear in an entirely fresh light, especially when mixed scorings were transferred to an instrument with a homogeneous sound, or vice versa. Words were added to purely instrumental works, opening up new vistas of understanding; translations and new words could set wholly different accents, as when a German text was added to the original edition of the C-major Mass (op. 86). Conversely, the elimination of the words might open up new dimensions for a vocal work, as when Ferruccio Busoni transformed the Benedictus from the Missa solemnis into a concert piece for violin and orchestra, or when Marcel Dupré composed an organ paraphrase of the fourth ‘Gellert’ Song, The Heavens are Telling.

In the past, the jubilee years from 1870 on have spawned other such artistic confrontations with Beethoven. The Diabelli ʼ81 project, marking the 200th birthday of this Viennese publisher, invited Austrian composers to present new ‘Diabelli Variations’. It would have been unthinkable without Beethoven’s own Diabelli Variations, op. 120.

This tradition will be continued in 2020: visitors to the BTHVN2020 Jubilee can look forward with excitement to new ‘Beethoven compositions’ in the widest imaginable array of genres. 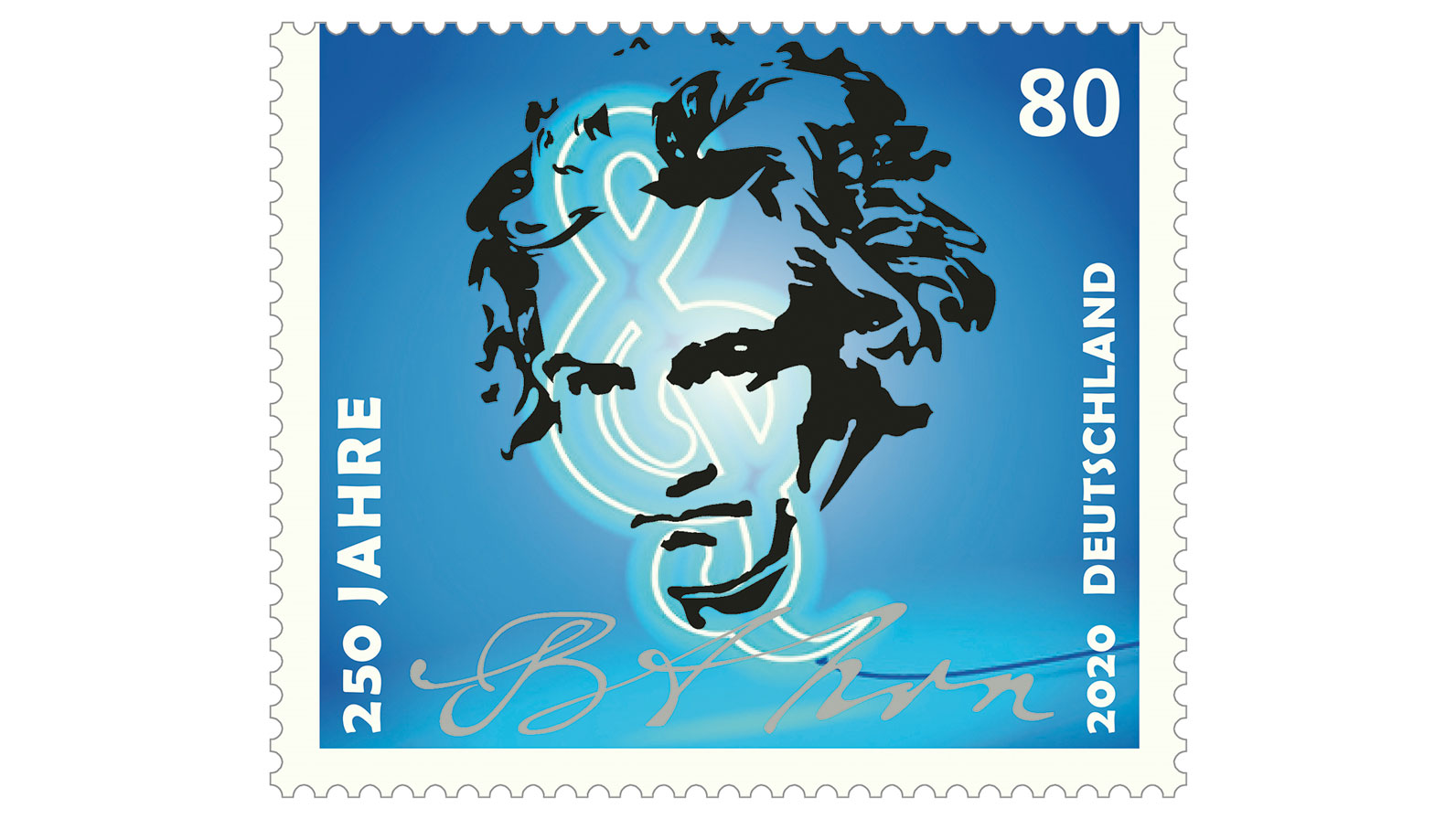 The 80 cent Beethoven anniversary stamp is released in a record first issue of 626 million copies – the highest first issue in the history of Deutsche Post AG. The stamp, issued by the German Federal Ministry of Finance, was designed by Thomas Steinacker, stamp designer at Deutsche Post.

The special stamp marking the 250th anniversary of Ludwig van Beethoven pays tribute to the composer and marks the Beethoven 2020 commemorative year. The stamp pictures a stylized version of the famous Beethoven portrait by Joseph Karl Stieler, a musical clef and the lettering “250 Jahre BTHVN” (250 Years of Beethoven). Ludwig van Beethoven often signed letters and scores using the “BTHVN” abbreviation, which is printed on the stamp in a special “metallic silver” color.

played classical composer, Beethoven is more relevant today than ever. His ‘Ode to Joy’ is the official anthem of a united Europe. Beethoven was a true cosmopolitan, and even during his lifetime his compositions connected people worldwide. At Deutsche Post DHL Group, more than half a million employees work every day to connect people and improve their lives. Now, we make it possible for each and every one to send letters with Beethoven’s portrait.”