Although Moscow was bombed during the World War II, it didn’t prevent the Bolshoi Theatre’s actors and actresses from performing on the stage.

In October 1941, Moscow was rife with rumors that Germans troops were approaching the suburb of Khimki. Muscovites fled the city in masse, taking highways deeper into the country. In the midst of the chaos, a group of eight young people – students from the Institute of Physical Culture – was in the process of digging a deep well under Hotel National. They were on a mission to mine the city’s key buildings in case Russian troops had to retreat from the capital. The Bolshoi Theatre actually proved the easiest one to mine: a well was effortlessly dug out directly beneath the orchestra pit.

Just a few days before the pit was dug, nearly all the theatre’s performers and its most valuable props were evacuated to the city of Kuibyshev (now Samara) by order of the government. A collection of Stradivarius violins, along with pictures from the Tretyakov gallery, were taken to the Kazan railway station. The priceless collection was moments from disaster; the train in which they were being taken away from Moscow had barely left the station when the Nazis dropped several high-explosive bombs on the spot where it had stood.

The Bolshoi company spent nine months away from Moscow, leaving the building vacant. The front colonnade was disguised using the settings from the classic opera Prince Igor while canvases from the legendary ballet Taras Bulba were mounted into barricades. Painters drew the outline of the theatre and the surrounding buildings on the square next to the theatre in order to protect the building from a direct hit. Despite these efforts, 1,000 lb. bomb detonated right in front of the theatre’s central entrance on Oct. 28, 1941.

It was at this time that Moscow, encircled by front lines, was opening its opera and ballet season. With almost the entire Bolshoi company evacuated and the theatre itself closed, there were two theatres still operating in the deserted city. One was the Stanislavsky and Nemirovich-Danchenko Music Theatre and the other was the Bolshoi Theatre affiliate that the government had opened upon requests from the artists who remained in Moscow.

“The affiliate’s opening ceremony, if we may put it this way, was held on Oct. 19,1941. We gave a great show. It was essentially a matinee performance, with the show starting at 2 pm. We could not start any later because of the regular bombings and the fact that it got dark very early. The time we began our shows was a reliable indicator of the progress at the front: as our army moved west, we would lift the curtain open at a more customary time. The first show, however, was a roaring success. It was accompanied by three air raid sirens,” said Mikhail Gabovich, a principal dancer and officer of the Moscow Fighters Battalion. “We were under strict instructions to break off rehearsals and shows during air raids. The audience was prompted to go down to the metro station.”

At first, the spectators did as they were told. But the audience soon started to refuse to leave, as they wanted to see the end of the show. The audience at that time consisted of war correspondents, workers from military defence factories, party activists, Muscovites and people from other cities who were stopping over in Moscow on their way into the Russian interior. 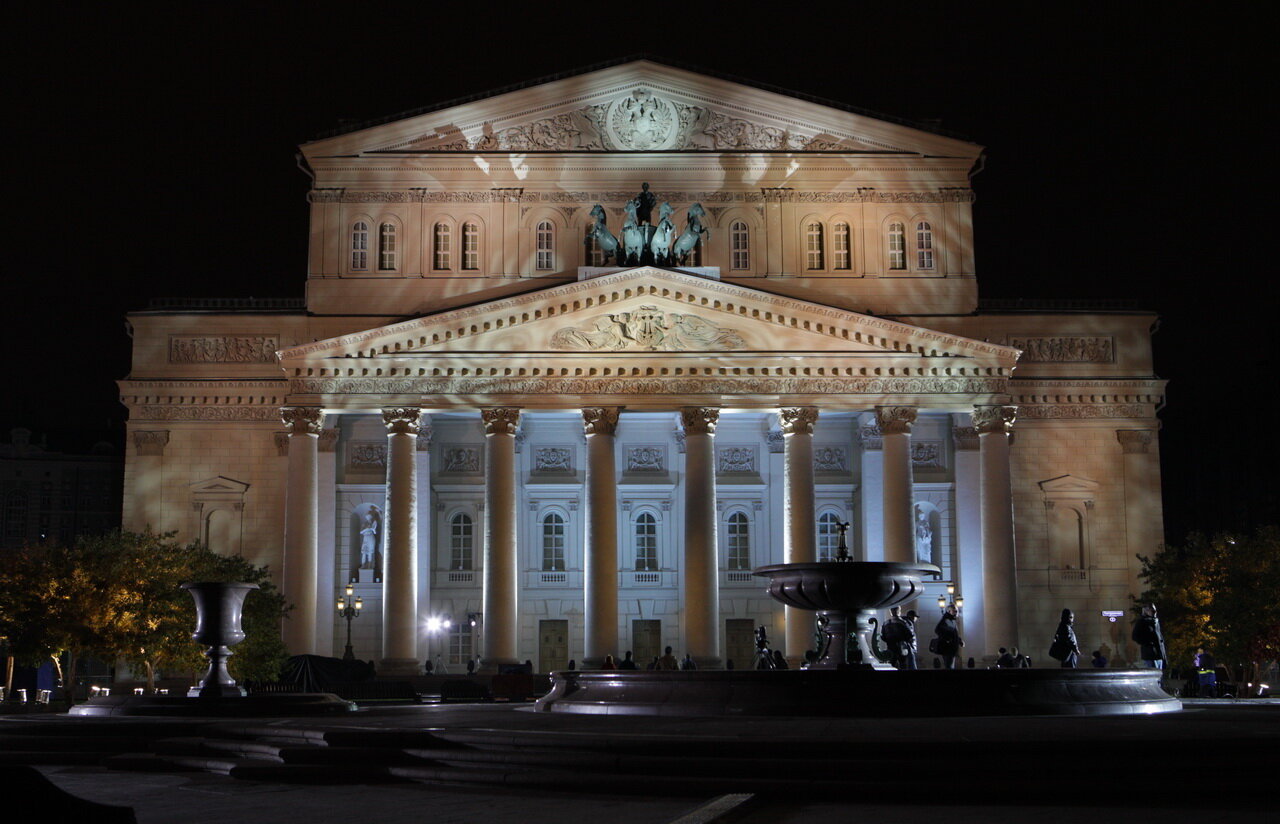 Meanwhile, the main part of the company was settling down in Kuibyshev. In early 1942, while still in evacuation, Dmitry Shostakovich’s Symphony No. 7 was performed for the first time. The composer dedicated the work to his native Leningrad (now St. Petersburg) and the outbreak of the Great Patriotic War (WWII).

“We were debating when we could start rehearsing Symphony No. 7,” said Valeria Dulova, a principal of the evacuated orchestra. “We had no music paper, no one to copy the music. A special plane was sent to Moscow to deliver the paper. When we had no performances or rehearsals, we tended wounded soldiers.”

Finally, by 1943, the artists were finally able to return to Moscow, and the two companies were reunited again as one. By this time, the restoration of the theatre building after the bombing was virtually complete. Restoration work never stopped even at 40 degrees below zero in the winter of 1942. As a result of the explosion, one of the building’s outer walls had to be replaced with a wooden structure, and the temperature in the hall matched that outside.

Between 1941 and 1945, the Bolshoi artists frequently went on tour to boost the morale of Russian soldiers. During the four years of war, 16 groups of artists were sent to the front lines and gave a total of 1,939 performances. Soviet Leader Joseph Stalin excused nearly 1,000 performers from active duty, although many artists remained on the front line as volunteers. The Bolshoi company performed on the steps of the Reichstag building in Berlin in late April 1945.

“In Berlin, our group gave its 140th performance. The half-ruined Reichstag building still reeked of burning boxes and fragments of furniture. To the right of the entrance I saw three missile boxes stacked upon each other. I realized that that would be my ‘stage,’” said singer Natalya Mikhailovskaya. “Soldiers helped me onto the boxes. Just a short while before, they had been fighting for every step here. As I started to sing, I could see a poster pasted on the opposite wall. It was in German and read: ‘No sacrifice is too great in the face of the great goal.’ Soldiers in shirts tainted with gunpowder flocked to the improvised concert hall from everywhere. Many of them were holding each other up or leaned on canes.”

The Bolshoi Theatre celebrated the end of the war with two major premiers of Sergei Prokofiev’s ballets Cinderella (1945) and Romeo and Juliet (1946).