The Victory Parade of 24 June 1945 could not be overshadowed even by the pouring rain, which caused the cancellation of the flight of 570 planes and of workers’ performances. There are many interesting aspects of the history of the organization and conduct of the Victory Parade.

The size of flags is standard, but for the Victory Banner some cloth is missing for its 3 cm width by 73 cm length. There is a version that a piece was torn off, to be kept as a memento, by Alexander Kharkov, gunner “Katyusha” of the 92th mortar regiment, who on 2 May 1945 was on the roof of the Reichstag. However, this version does not seem convincing. At that time nobody knew that this specific banner, one of many, would become the symbol of victory and of the end of the war effort.

There is another version. In the early 1970s an old lady came to the Museum of the Soviet Army and recounted how she had served in the political department of the 150th infantry division, where the banner was kept. At the time of demobilization, in the summer of 1945, the women who worked there tore off a piece of the banner’s cloth, cut it into shreds and then each ripped off a small piece to keep as a souvenir. As evidence the woman showed her piece of the great banner.

The Victory Banner was brought to Moscow already on 20 June 1945, but it was not carried to Red Square. It was assumed that during the parade it would be carried by the heroes who had hoisted the flag over the Reichstag: Neustroev, Kantariya, Berest and Yegorov. But they had little familiarity with training exercises. At the rehearsal the banner-bearers performed very poorly, and nominating others for the task would have been strange, while the time left for more rehearsals was inadequate. Marshal Zhukov decided not to use the banner. It was carried for the first time during the Victory Parade of 1965. 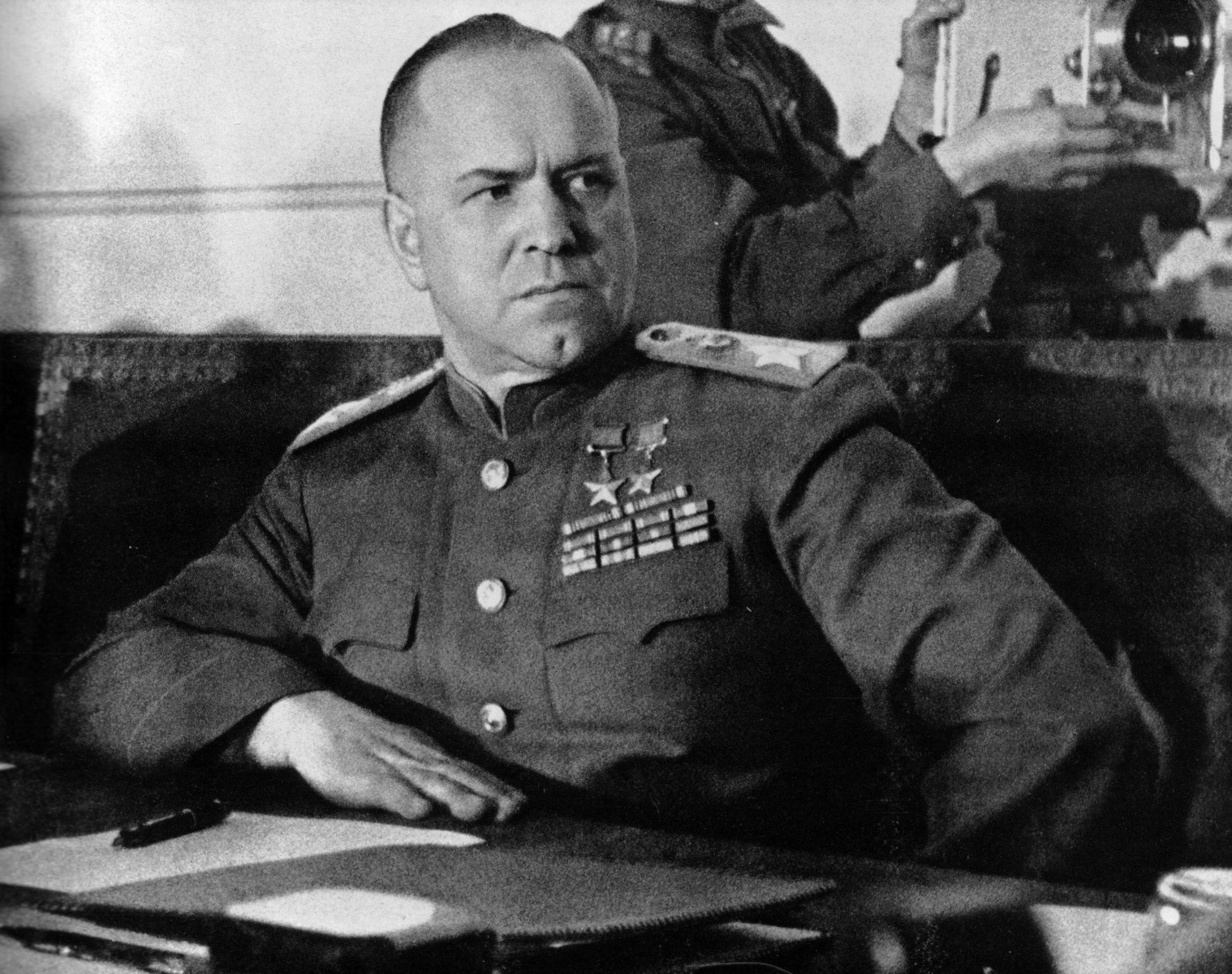 Marshal Zhukov’s ceremonial speech has been preserved until today. It contains very interesting features that demonstrate his professional work on the manuscript. In the speech he also annotated intonations. Next to the words “Four years ago the German-Fascist predatory hordes attacked our country” there is the note “quiet, more stern”; by the phrase “the Red Army under the leadership of his military genius launched a resolute offensive” he noted “louder, with a crescendo”, and so on.

Why did Stalin not inspect the troops?

The nearly official, but still controversial, version of the story of Stalin’s refraining from inspecting the troops himself at the Victory Parade is depicted in the memoirs of Georgy Konstantinovich Zhukov. According to the Marshal, Stalin summoned him the day before the parade and ordered him to take responsibility for inspecting the Victory Parade, which Rokossovsky would lead. Having ascertained that Zhukov had “not forgotten how to ride”, Stalin alluded to his advanced age, and already on the next day Georgy went to the parade rehearsals.

There, according to Zhukov, Vasily, Stalin’s son, told the Marshal about how on 16 June 1945 his father did not manage to hold himself onto the saddle and was thrown off by a thoroughbred that had been especially chosen for him. Luckily, there were no serious consequences, including for those around him. According to Vasily, even Budyonny was frightened at that moment. This version of events is considered controversial, for the reason that in the first edition of “Memories and Reflections” the episode with Zhukov was not included.

The magic of numbers

The Victory Parade of 24 June 1945 was the first whose approval was granted through a prior detailed scheme. Parades in the 1930s had been approved at meetings of the Politburo on the basis of memos by Kliment Voroshilov, indicating the number and types of troops. Parades were usually approved unanimously. The training scheme of the Victory Parade was prepared under the supervision of the director of the Moscow garrison. The commander of the Moscow Military District, General-Colonel Pavel Artemyev approved it personally. It is believed that Stalin took the decision to hold a parade on 24 May 1945. 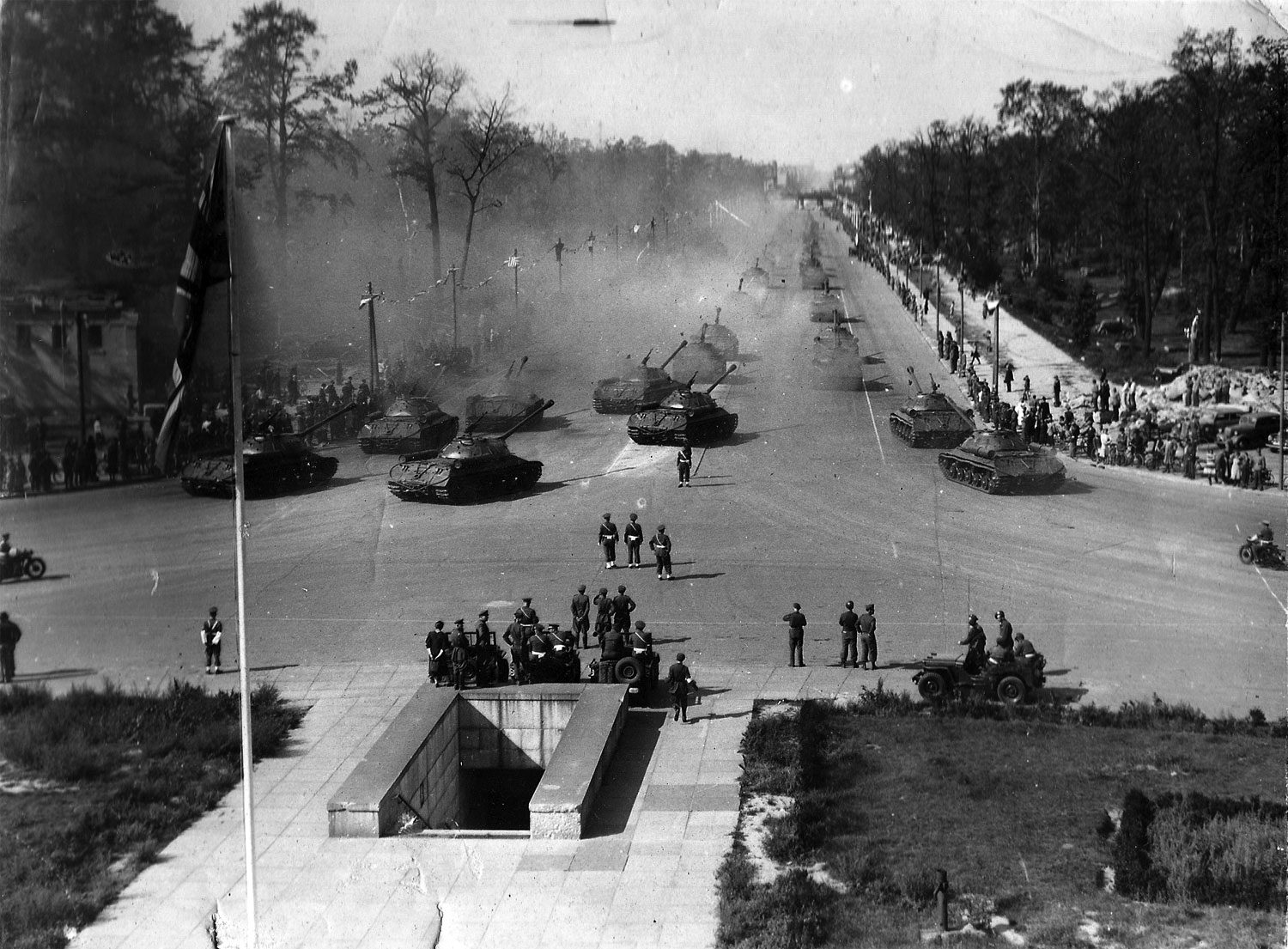 When people talk about the Victory Parade of 1945, what they usually have in mind is the Moscow parade, held on 24 June. However, apart from that, in 1945 there were three other full Victory Parades. Before the Moscow parade, on 4 May 1945, a parade of Soviet troops took place at the Brandenburg Gate in Berlin. General Nikolai Berzarin, military commander in Berlin, presided over it. A Victory Parade of allied troops in Berlin was held once again on 7 September 1945 by a decision of Georgy Zhukov. A regiment composed of a thousand men and armored units took part in it. Finally, another parade was held in Harbin on 26 September 1945. Soldiers and officers attended the parade in field uniform, while artillery units and tanks closed the procession.

From the Victory Parade until 1949, Victory Day in the USSR was celebrated as a holiday. From 1949 until 1965 Victory Day was no longer a holiday for which people had a day off work. Until now historians can only guess the reasons for the cancellation of the holiday. There is even a version that Stalin was afraid of soldiers because many of them following their experiences at the front were affected by post-traumatic stress disorder. Any reference to the war could cause them to behave inappropriately. Therefore, the Soviet authorities “waited”.

In 1965 Victory Day became a holiday at the initiative of Leonid Brezhnev, the former frontline soldier and lover of magnificent festivities, which he could attend in his marshal’s uniform.

Редакция РМ
Предыдущая статьяThe Bolshoi Theatre in WWII: The show must go on
Следующая статья Quid est veritas, or What is truth?