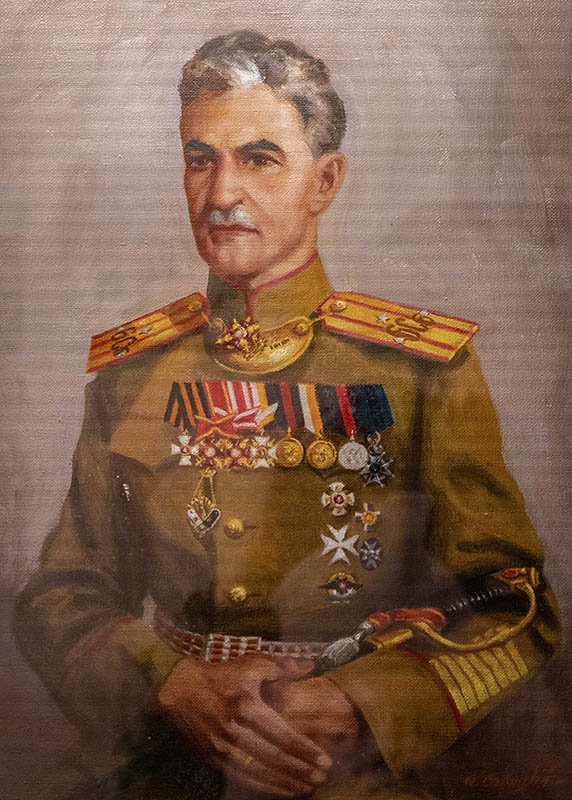 Discover the stories of five military men, who left Russia after the 1917 revolution, and get an opportunity to take a look at their photographs and personal belongings from the collection of the Alexander Solzhenitsyn House of Russia Abroad, curated by Moscow Mayor’s Official Website.

The White emigration was the first and biggest of the four waves of Russian emigration, with nearly two million people leaving the country between 1917 and 1923. The exodus developed in three directions: with General Wrangel’s army – from southern Russia via Constantinople to Yugoslavia and Bulgaria; with Admiral Kolchak’s army – from eastern Russia to China and Australia; and from western Russia (Finland, Poland, and the Baltic provinces), where Russians unexpectedly found themselves with an émigré status because of changes in the state borders.

The mass of émigrés included members of creative intelligentsia, aristocrats, business people, industrial workers, peasants, and, of course, officers and men. Mos.ru together with Mosgortour got together and did some research on the military, who left Russia, and their life in emigration.

A graduate of the Khabarovsk Cadet Corps and the Alexander Military School, Leonid Seifulin went to the fronts of WWI as a young man: he was 21 years old in 1914. He returned to his home in the Far East with the Order of St George, 4th Grade, and several serious wounds. During the Civil War, Seifulin fought with the Special Rifle Regiment on the Eastern Front. Later he was invited as a tutor to the Khabarovsk Cadet Corps, with which he emigrated to China in 1923, taking along with him his pregnant wife.

In Shanghai, he went on with his tutorship and was active in the life of the Russian émigré community. He joined the Infantry Section and the Internal Audit Commission of the Union of Former Russian Army and Navy Servicemen, took part in the activities of the Officer Assembly in Shanghai, was treasurer and Secretary of the Union of Russian Military Invalids, and later served as the editor-in-chief of the magazines Kstati and Drug Invalida.

In 1949, when a civil war broke out in China and the Communists overtook Shanghai, Seifulin together with his family left the city for a refugee camp on the Filipino island of Tubabao. Several thousands of settlers from China spent almost three years there in expectation of a US or Australian entry authorisation. In the winter of 1951, the Seifulins came to Sidney. Leonid Seifulin found his legs soon and took to assembling a Russian emigration archives in Australia, which he later deposited at a local university. He also contributed to military journals. Leonid Seifulin passed away in Sidney in 1986. His daughter donated his portrait painted by one of his cadet pupils and some of his decorations to the foundation of the House of Russia Abroad. 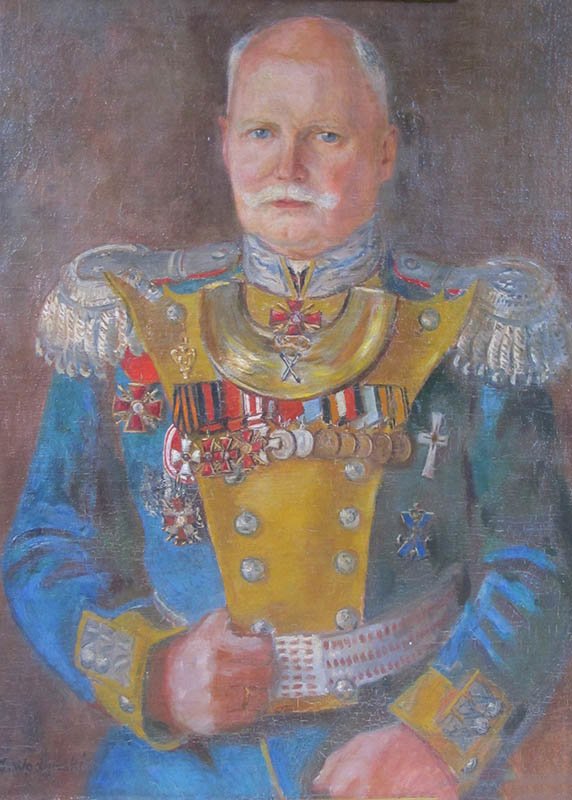 Baron Nikolai Schtakelberg, 22, finished the St Petersburg Infantry Junker School in 1892 and was assigned to the Kexholm Life Guard Regiment, stationed in Warsaw, with the rank of second lieutenant. In 1914, before leaving for WWI, he accepted an invitation to a tea party from his friend Vladimir Vitkovsky’s mother.

“After the tea party, Varvara Mikhailovna summoned her son and me and blessed us with a cross, and hanged an amulet attached to a silk ribbon around our necks, and asked us to never take them off throughout the war, and always have them on us. We promised… Out of the 72 officers, who left with the regiment for the war, only two of us came back unhurt,” Schtakelberg wrote in his memoir.

In fact, the majority of officers and men of the Kexholm Life Guard Regiment were either killed or taken prisoner in East Prussia during the first years of hostilities. It was only two officers, Schtakelberg, who took over as the regiment commander in 1916, and Vitkovsky, who, though facing artillery fire and fighting on a par with others, had not a single wound. Schtakelberg treasured the lucky cross and amulet to the end of his days.

While his regiment remained in Warsaw, the baron raised a family, with which he emigrated to Poland after the Civil War in Russia. During WWII, when the Red Army moved in to liberate Poland, Russian émigrés had to flee from the country, leaving behind houses and personal belongings. No one wanted to return to Russia and face punishment. The émigré families were accommodated at the DP camps in Europe, where they received “distribution” and authorisation to leave for other countries. So, in the 1940s, the Schtakelberg family emigrated to Australia. Nikolai Schtakelberg passed away in Melbourne in 1956. His remaining decorations were inherited by his offspring. His grandson, Nikolai Yakubovsky, lives in Australia to this very day. The family relics, the amulet and the cross that saved Nikolai Schtakelberg’s life, are now at the House of Russia Abroad.

He was born in Ukraine and trained at the Sumy Cadet Corps. He wanted to be a military man, like his father, Major General Alexander Linitsky. In October 1914, right after graduation from the Nikolayev Cavalry School, he went to war with His Majesty’s Ulan Regiment. He returned from WWI with the rank of second captain of cavalry and was promoted colonel during the Civil War. He participated in the Kornilov mutiny and ended up with the White forces in southern Russia after the October revolution. He fought under General Wrangel and was evacuated with his army from the Crimea first to Gallipoli and thence to Belgrade. In the mid-1920s, Alexander Linitsky graduated from the engineering department of Belgrade University and took a job with a construction company.

His father, also a member of the White movement, turned up in Ygoslavia as well, after covering a military itinerary of his own (Novorosiysk – Lemnos – Gallipoli). The family split during WWII, with the younger Linitsky, his wife, and daughter emigrating to the United States and the elder Linitsky staying in Yugoslavia.

In San Francisco, Alexander Linitsky was an active member of Russian military organisations, such as the Cadet Union, of which he was the chairman. He also joined the Society of Russian Veterans of the Great War. The rest of his life he spent in the United States. He was buried in San Francisco’s Serb cemetery in 1977.

The last commander of the Chevalier Guards Regiment, Vladimir Zvegintsov was trained at the Corps of Pages, one of the most prestigious military schools, and got an assignment to the Chevalier Guards Regiment. In 1918, after WWI, he was a Volunteer Army officer and took part in the Civil War. In the autumn of 1920, Vladimir Zvegintsov, his wife, former lady-in-waiting to Empress Alexandra Feodorovna, and his six-year –old son were evacuated from the Crimea. After spending a few years in Italy, the Zvegintsovs moved to France, where they set up house.

Vladimir Zvegintsov the junior was trained as an economist at a Swiss university and had a job with the International Chamber of Commerce in Paris. In the 1930s, he carried out his first serious historical research, classifying 1,200 Russian military songs. He also authored numerous articles and treatises on military history.

In the 1990s, Vladimir Zvegintsov visited Russia on several occasions. He passed away in 1996 and was buried at the Sainte Geneviève des Bois Russian Cemetery next to his father.

Alexander Solonsky was born to a modest bourgeois family in the town of Borovichy, Novgorod Region, in 1882. After a course at the Naval School for Surgeon Assistants in Kronstadt, he was assigned to the Baltic Fleet, where he served on the battleship Admiral Ushakov. In 1900, he worked as a surgeon’s assistant at a naval hospital; in 1904, he took part in the defense of Port Arthur on the battleship Poltava with the rank of doctor’s senior assistant.

In 1909, he tested out for a general education certificate and was enrolled in the St Petersburg Military Medical Academy. He made great strides and it was planned that he would join the academy staff after graduation. These plans were wrecked by WWI. Solonsky was assigned as a doctor to a ship whose mission was to find and destroy mines in the Baltic Sea. In 1918, he was mobilised to the Red Army; two years later, he deserted to the White Army. Solonsky, his wife and daughter followed General Wrangel’s army to Sevastopol, whence they were evacuated to Yugoslavia.

In Belgrade, Solonsky worked at the Russian Red Cross ambulance station and headed a children’s policlinic. He had always been fond of children: in 1929, he managed an ambulance post at an orphanage, delivered lectures on child diseases at the local university, and raised money on Christmas-tree celebrations for the poor. He treated the entire Russian population of Belgrade.

He visited his native town of Borovichi only once, which was in 1965. About the same time, he moved from Belgrade to Geneva, where his daughter lived. He passed at the grand age of 94 and was buried at the Saint Georges cemetery.