According to Mosgortrans, 2.5 million Moscow passengers choose surface transport daily. Mosgortrans – the largest operator of public urban transport in Europe – serves more than 750 routes in the city. It rolls on duty more than 7.5 thousand modern buses and more than 650 innovative electric buses every day.

Moscow’s electric buses run on 52 routes in the center, north, east, west, northeast and northwest of the city. Rolling stock has been updated on almost all lines. Progress is obvious – in September 2018, citizens just started using first electric buses. This spring the Moscow plant for the assembly of KAMAZ electric buses was opened on the basis of SVARZ.

“Moscow electric bus is one of the best on the world market. All electric bus assembly operations at the plant are completely eco-friendly, with zero emissions. Since this year electric buses are not only operated, but also assembled in Moscow – this greatly simplifies the process of servicing and adapting innovative transport to the needs of passengers and the city. This year the city budget will receive about 60 million rubles due to the opening of the KAMAZ assembly plant,” – Maksim Liksutov, Deputy Mayor of Moscow for Transport.

First ‘made in Moscow’ e-buses are already successfully serving on city routes. At the same time active work for modernization and developing services for passengers is underway. For example, the changes affected navigation and visual informing of passengers. The information is minimized, but all is as informative as possible. A survey based on the results of the pilot project showed: 93 percent of passengers noted the clarity of stickers and stickers on buses; 91 percent believe that information spots are conveniently located; 90 percent of passengers considered the new route scheme convenient.

From September 2019, it became possible to pay for trip with contactless bank cards on all Mosgortrans transport. Passengers can use the service using cards and mobile devices with the function of contactless payments – PayPass, payWave, Apple Pay, Google Pay and others. To pay for trip, you need just to attach a bank card or smartphone to the validator. The possibility of paying by bank card is convenient for passengers who have not purchased a ticket in advance. During pandemic time drivers do not sell tickets in transport, so such kind of payment is very convenient.

Although the passenger traffic has decreased due to restrictions related to the pandemic time, there is a noticeable increase in paying for trips by bank cards or by smartphones. If in 2019, slightly less than 6.5 million passengers used non-cash payment. In 2020, almost 20 million people paid for their trips in this way.

Passengers’ safety is critically important question for a growing metropolis. Mosgortrans has reduced the number of accidents by 26 percent over the past year thanks to the Anti-sleep system, which is installed on all buses and electric buses. Anti-sleep system scans drivers ‘ faces, detects the level of fatigue and helps to prevent potentially dangerous situations. Unnoticed by passengers, the system makes trips safer and more reliable. Video surveillance cameras located in the interior of buses and electric buses contribute to the safety of passengers. They also help law enforcement agencies in finding intruders and crime detection.

Moscow electric buses carried more than 100 million passengers and run almost 44 million kilometers. Severe frosts in winter and the sultry summer of 2021 have proved that electric buses are a reliable type of surface transport. In autumn of 2022, manufacturers promise to provide the first hydrogen electric bus to Mosgortrans for test service and it is planned to create their production on the basis of SVARZ in 2023 already. The advantages of eco- transport are obvious: it reduces CO2 emissions by more than 10 times, it does not need to be refueled often, and only steam and heat are released during the operation of hydrogen electric buses – the most environmentally friendly solution for large megacities.

Electric water transport: back to the future

Following a 16-year break, Moscow’s residents will get the once beloved water transport back. It first appeared in 1923, and in 1960s it was in great demand. In 2006, regular water transport stopped working at all – only pleasure trips remained.

The Mayor of Moscow supports the implementation of the project and it will be launched in stages. At first step river trams will start shuttles regularly in 2022, and their number on cruise will gradually increase. 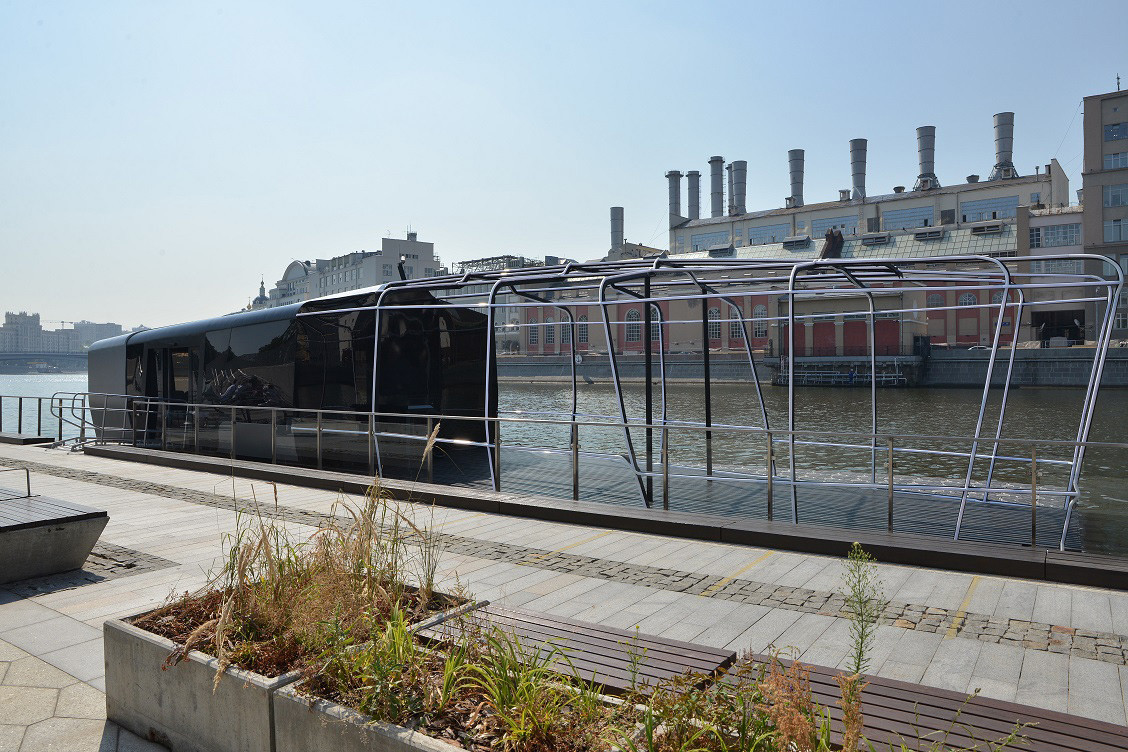 As one of the goals for the city transportation, Moscow is aiming to create convenient, predictable and safe water transport. It will allow 1.5 million residents to move around Moscow much faster in 2022 already. The carrying capacity of each route will be 15-16 thousand passengers per day – this will be another important element of Moscow transport and a convenient alternative to a personal car.

Future river vessels will be 100% eco-friendly, without harmful emissions. Same as city electric buses – this is very important for the Moscow water area and the health of all residents. The Moscow vessels will also be spacious: about 22 meters in length, each with 42 seats, two of which are for people with disabilities. The cabin will have information screens, USB charging, Wi-Fi, places for scooters and bicycles, as well as comfortable seats and tables for working with a laptop. They will also include panoramic windows.

New water transport will enter the routes in stages, starting from June 2022 – as it will be the real demand from passengers. Due to the growth of demand, the river fleet will also grow and allow to shorten the intervals. In general, main goal is to make Moscow water transport as flexible as possible in order to adjust it to the interests of residents.

Residents of coastal areas will be primary passengers of water transport within walking distance, which will reduce the travel time.

For example, the journey from Fili Park to Verkhniye Mnevniki pier by bus will take 65 minutes, and by water -only 13.5 minutes, i.e. 5 times faster. Or from Pechatniki to the Kolomenskaya embankment from one bank to the other can be reached in 3 minutes – the bus trip will take more than an hour.

The most challenging part, however, is a development of berths. Their careful reconstruction and improvement of their availability will be required. For example, the transfer of surface transport stops or the creation of new pedestrian routes are necessary for the maximum convenience of future passengers. Some of the berths are equipped with charging stations for fast charging of vessels. Testing first charging spot at one of the berths of route No. 1 is already planned.

“Moscow transport unites the city. You can get to any point of Moscow from your home. Muscovites today have the opportunity to choose the most suitable, affordable and convenient transport. This is what distinguishes Moscow today from many cities, and makes it one of the most comfortable megapolises in the world,” said Maksim Liksutov, Deputy Mayor of Moscow for Transport.