Intercession of the Theotokos Church

The Intercession of the Theotokos Church in Izmailovo was built from 1671 to 1679 by the Medvedev brothers from the Volga area under supervision of “mason journeyman” Ivan Kuznetchik on the site of an old wooden church that stood at the estate of nobleman, Nikita Romanov. The church featured a spectacular porcelain-tile pattern called ‘peacock’s eye’ by legendary craftsman Stepan Polubes. The iconostasis was fashioned at Simon Ushakov’s shop.

In November 1837, Nikolas I, the Emperor of Russia, decreed that the largest almshouse for veterans be established on the island. It was closed in 1918, and the buildings were repurposed as communal flats in 1924–1926 for the workers of the Salyut Aviation Plant. The former almshouse then housed 2,500 people, the church became a warehouse, and the frame of the iconostasis was destroyed. Only the large icons survived. They had been used for shelves until discovered by local history expert Alexander Kuznetsov in the 1960s, who took his find to the Old Russian Art Museum. The church was a warehouse for the Informelektro Research Insitute in the 1970s and 80s. Religious services resumed in the 1990s. In 2001–2002, the church received its new iconostasis that featured several of the extant icons by Simon Ushakov.

Built from 1671 to 1679, this three-level tower served as a parade entrance to the Izmailovo Estate. An arched stone bridge led to it across the Silver Pond from the south. The first story featured the gates and streltsy guardhouses. The third served as the bell tower of the adjacent Intercession Church. The second story was a heated guest chambers. The furnace pipes are still there and can be seen in the corner of the tower’s covered gallery. 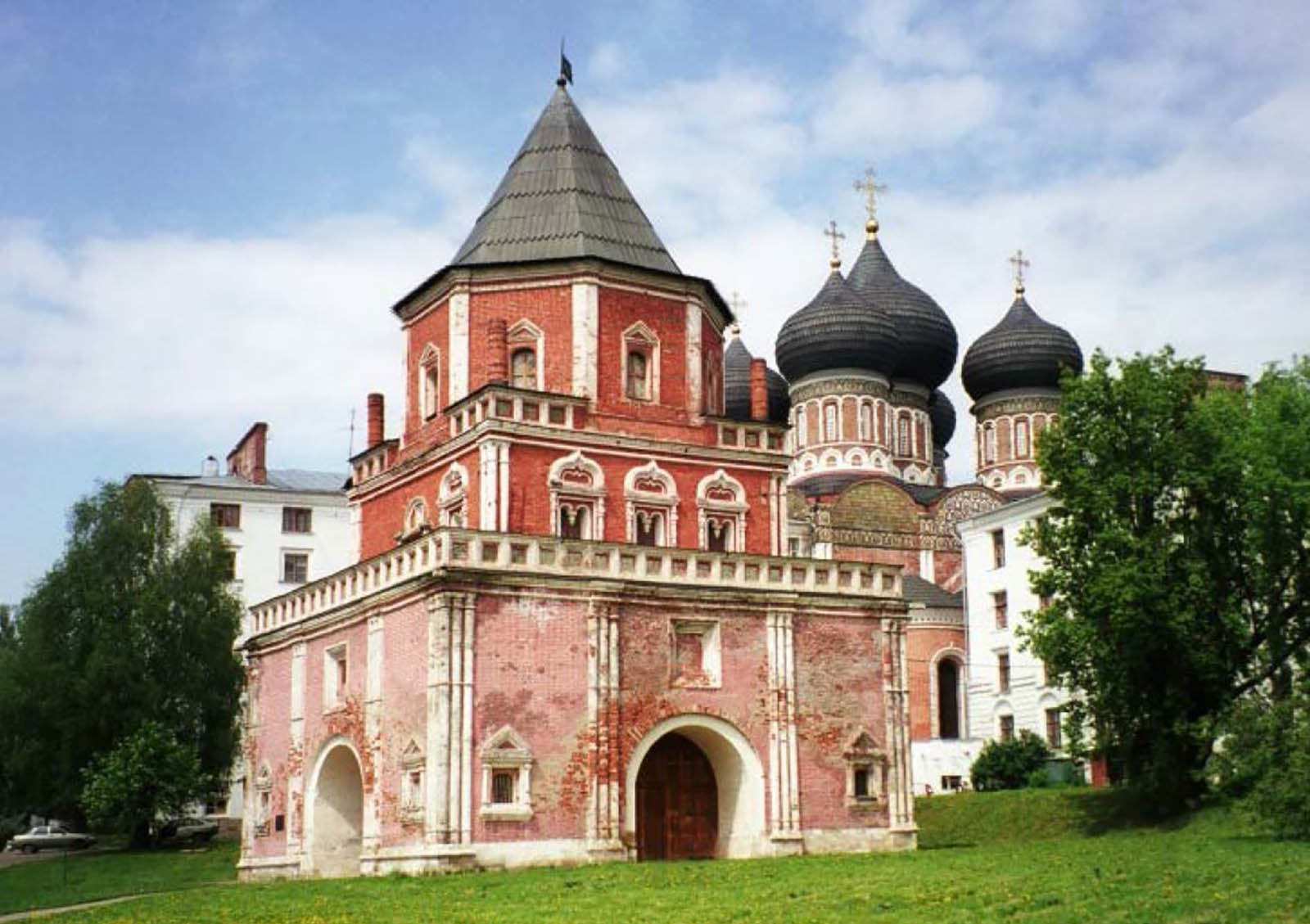 From 1696 the estate was home to Tsarina Praskovia Fyodorovna, the widow of Peter the Great’s brother, Ivan V, and her three daughters, tsarevnas Yekaterina, Anna and Praskovia. The women lived there permanently until 1713, after which they would visit the place only once in a while. After Anna’s enthronement as Russian Empress, Anna Ioannovna she chose Izmailovo as her residence.  It is believed that the second floor of the tower then hosted meetings of the Russian government, the senate.

In the 1920s, the Bridge Tower was refashioned to house communes. The commune of the Salyut Aviation Plant, one of the first in Moscow, occupied all of Izmailovsky Island, which became a worker townlet and was named after Nikolai Bauman. The builders of the new state resided in what were once chambers. The tower later housed communal flats and various institutions. Today it is the Moscow Tile Museum, which opened in 2008.

One of the more recent buildings is the Builders’ House of Culture in Izmailovskaya Square. The urban development of Izmailovo began after WWII under the leadership of the chief district architect, Georgy Chaltykyan, and in accordance with a new design plan. The project was to build a residential quarter for oil workers beyond 13th Parkovaya Street. The Cinema Club of the Oil Industry Ministry, built to Chaltykyan’s design, opened on 12 June 1951 at Izmailovskaya Square. It was later renamed as the Builders’ House of Culture. 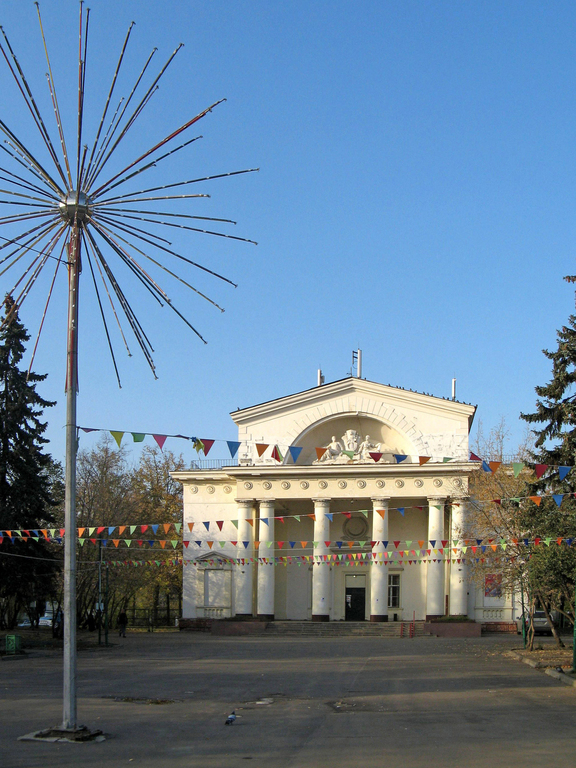 Soviet neo-classicism, characteristic of Stalin-era low-building districts, dominated post-war Izmailovo. It still has rows of 1940s buildings, for instance, the group of buildings on the even side of 6th Parkovaya Street. This ensemble has a very cozy look with gated arches, vases, high ceilings and stucco on the facades. The facade of the house of culture still features ‘embellishments’ such as bas-reliefs depicting a football player, a tennis player, a dancer and a worker. In the 1990s, the building housed a prominent rock-club entitled Ne Bei Kopytom (Don’t Hoof-Strike), a mountaineering equipment store and several cafes. Today it is once again a house of culture or civic centre with several clubs and hobby groups and classed for children.

Izmailovsky Park has several unique buildings that have survived from Czar Alexei Mikhailovich’s (1629–1676) “research farm”. This include the Olnyanoi, now Oleny ‘Deer’ Pond and Prosyanskaya Dam. The pond and the dam are places to go sled-riding, but in the 17th century they served nascent Russian industry and the Russian fleet. It was in an Olnyanoi Pond storage house that young Peter the Great found a little boat that was later to be called “the grandfather of the Russian fleet.” The repaired boat had to be tested and the closest water was behind Prosyanskaya Dam. The dam blocked the Serebryanka River, thus creating the widest and longest pond in Izmailovo.

A large water mill stood where the Serebryanka River now flows through the dam. The plans survive in the Russian State Archive of Old Documents as “The map of the island between the swamps near the berry grounds and near the Prosyanskaya Dam.” The drawing puts the mill at over 12 metre high, a real skyscraper in the 17th century. In the 18th century, the Izmailovo Estate no longer had any industrial use, and the dam was gradually washed away. 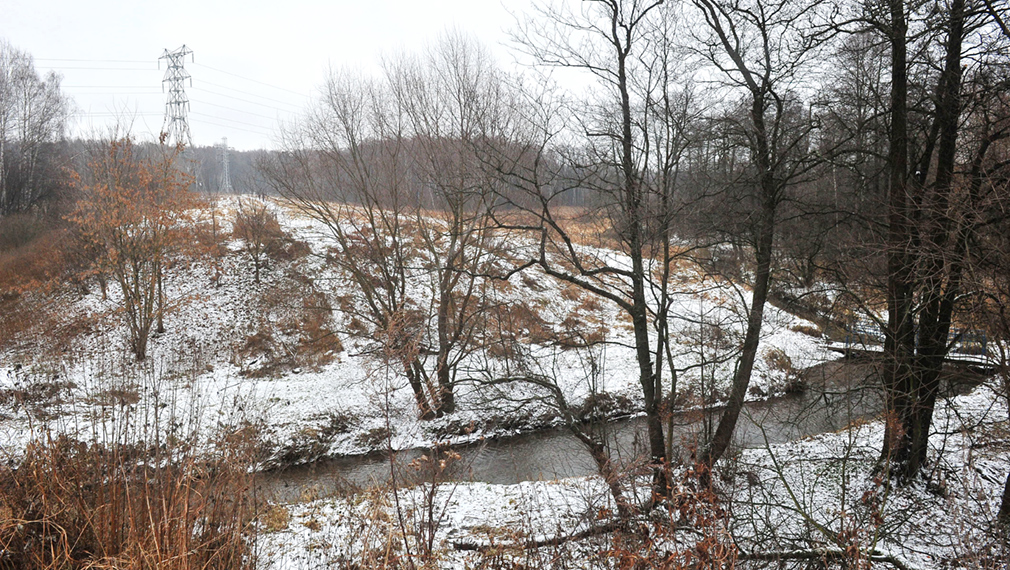 Pervomaiskaya was a temporary metro station that opened on 24 September 1954 under a project to extend the metro’s Arbatsko-Pokrovskaya Line further east from the Izmailovskaya, now Partizanskaya, station. The station was closed when a new section of the line opened in October 1961. It was situated in the fifth nave of the Izmailovo Maintenance Facility (the station then was closed when new works started to continue the metro line till Shchyolkovskaya metro station.) It had one entrance hall, still used today, that leads to Pervomaiskaya and 1st Parkovaya streets.

The entrance to the station can still be found behind the garages near Out-patient Clinic No 52. It was possible until a few years ago to read what remained of the L.M. Kaganovich Metropolitan. Pervomayskaya Station inscription on the entrance arches.

The entrance hall now functions as an assembly shop, and the platform is used in the maintenance shop. Tile and stucco are reminders of the years that the station welcomed passenger trains.