By Oksana Kopenkina, art analyst and founder of the Russian-language Arts Diary website

When we speak of Aivazovsky, we immediately imagine seascapes. You may wonder that special can you find in his paintings, except for endless sea with ships? There is an opinion that it is enough to look at five or seven of his paintings and get to know the whole of Aivazovsky. But it isn’t so.

He was a Romantic painter. His paintings depict dramatic shipwrecks and sea battles. Moonlit paths, smoking volcanoes, trees stretching up to the sky – everything that amazes you with its beauty.

In addition, Aivazovsky did not paint only seascapes. He was resourceful and didn’t like to repeat himself. And yet he painted 6,000 works in his lifetime!

The Ninth Wave is Aivazovsky’s most famous work. It was recognised as a masterpiece on the very first day of the exhibition back in 1850. 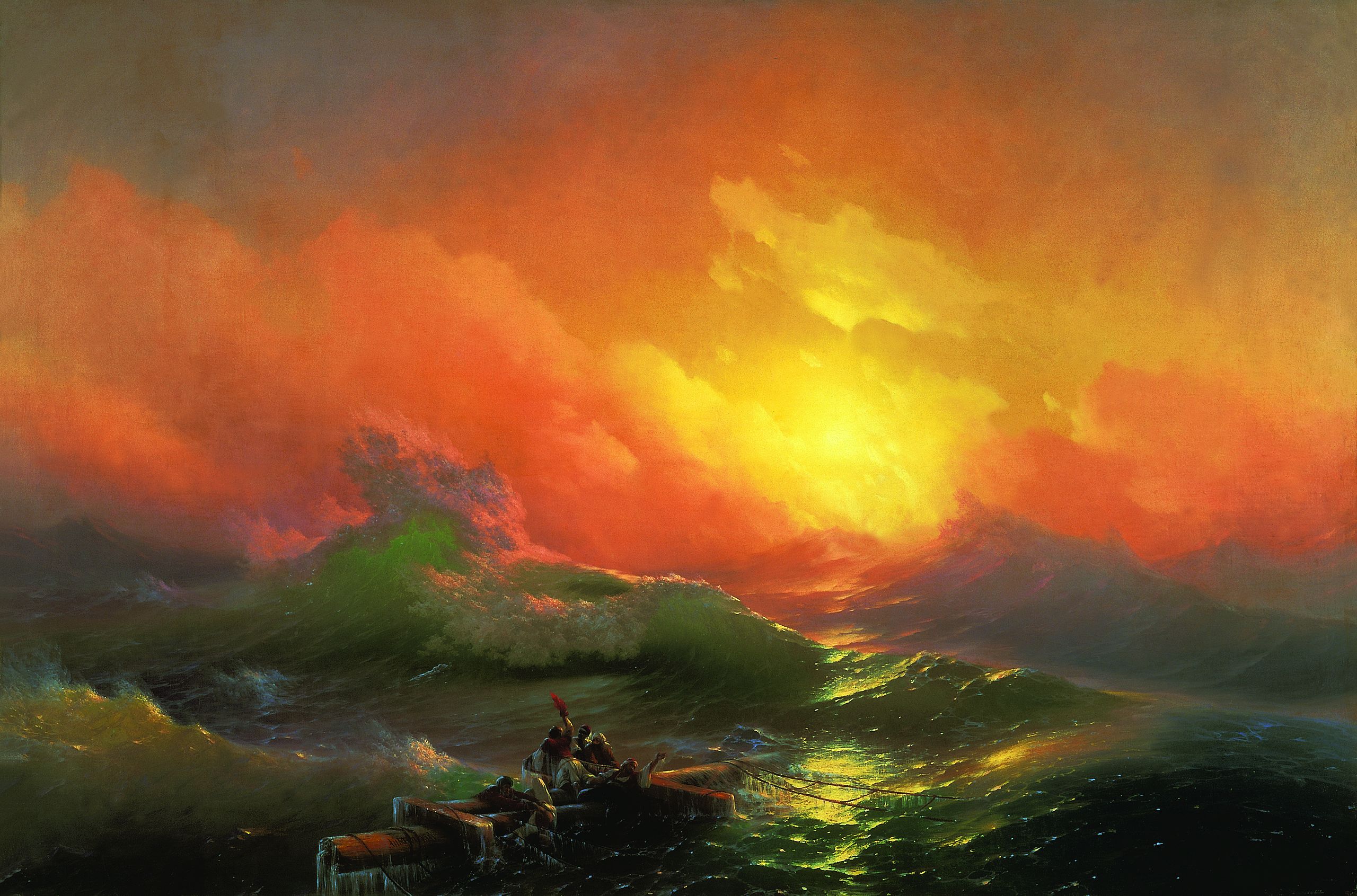 Dawn. There is a handful of surviving sailors on the broken mast, resisting the formidable elements. A drama, but not a tragedy. Aivazovsky was an optimist, this is why a large wave only passes by. The painter leaves the unfortunate ones a chance for salvation.

During a storm Aivazovsky’s waves look especially impressive. The sun is seen through them. The painter achieved this effect of transparency by multiple brush strokes (glaze technique). Few painters depicted such waves.

You may believe that it will take many months to do such a painting. But Aivazovsky was surprisingly skilled. He would start working early in the morning and finish… at noon. Sometimes he worked until evening. He was not even embarrassed by the presence of spectators: he used to conduct a kind of master class for artists. He could do another masterpiece before their eyes, bringing novices into a state of shock – after all, a blank canvas turned into a lapping sea in just an hour and a half!

Over the years, Aivazovsky did not lose his skills. Look at his work, A Ship in the Midst of a Stormy Sea, painted thirty-seven years after the Ninth Wave. Advanced age did not prevent Aivazovsky from depicting stunningly beautiful water. This painting was done within a few hours as well. 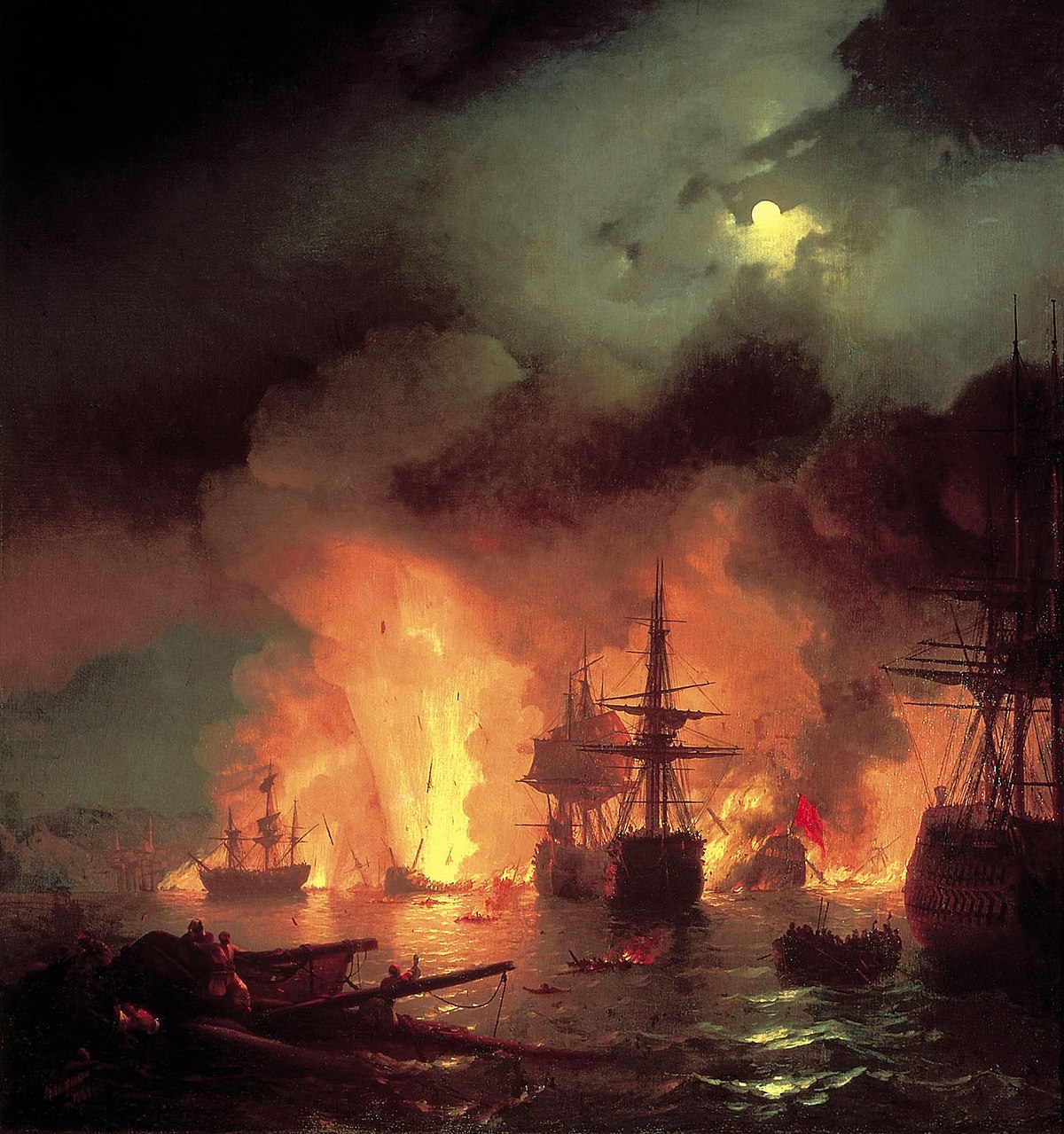 The Battle of Chesme is one of the most famous battle paintings. Bright fire and wood chips are flying from an explosion. It looks like the painting is actually on fire. The sailors are trying to escape in the water.

Everything is so vivid as if the painter were present at this battle. This naval battle between Russian and Turkish ships took place in 1770, so Aivazovsky could not have seen it. But this does not mean that he did not see sea battles at all. After all, he was the official painter of the Navy and was given access to all ships, including during real hostilities. Aivazovsky knew the equipment on ships very well. Even if a ship is depicted far away, it is still painted in a minute detail.

Aivazovsky’s night landscapes were especially good. The Bay of Naples on a Moonlit Night is one of the first such works. A very bright yet distant moon. A moonlit path. Smoking Vesuvius. Tall trees in the foreground. A monastery. Two monks in white.

The moon was so bright some visitors seriously looked behind the painting, thinking they would find a lit candle there, illuminating the picture.

The landscape was painted during Aivazovsky’s long tour around Europe. At first, the Academy of Arts sent him there. Aivazovsky’s paintings sold well in every country. So he could afford to extend the trip. On his return to Russia there were 130 visas in his international passport!

The painting, ‘Chaos. The Creation of the World’, is Aivazovsky’s most famous religious work. The moonlit path makes its way through the dark waves. But it is not just the moon in the sky, but a silhouette of God with His arms outstretched. It is difficult to understand why the artist called the painting ‘Chaos’. Everything on it is harmonious and grand.

The painting was exhibited in Naples and Rome and brought fame to Aivazovsky. Critics noted the special workmanship of the young painter in depicting the sea and the sky.

Pope Gregory XVI even awarded Aivazovsky a gold medal and wanted to buy the masterpiece, but the painter made a present of his work to the Pontiff.

In the early twentieth century Pope Leo XIII presented the painting to the Armenian Mekhitarist congregation in Venice. It is kept in the Monastery of San Lazzaro degli Armeni to this day.

Look at another religious painting, The Flood. Figures of dying people and animals are mixed up with waves and splashes. This is where the real chaos is, albeit very pompous. 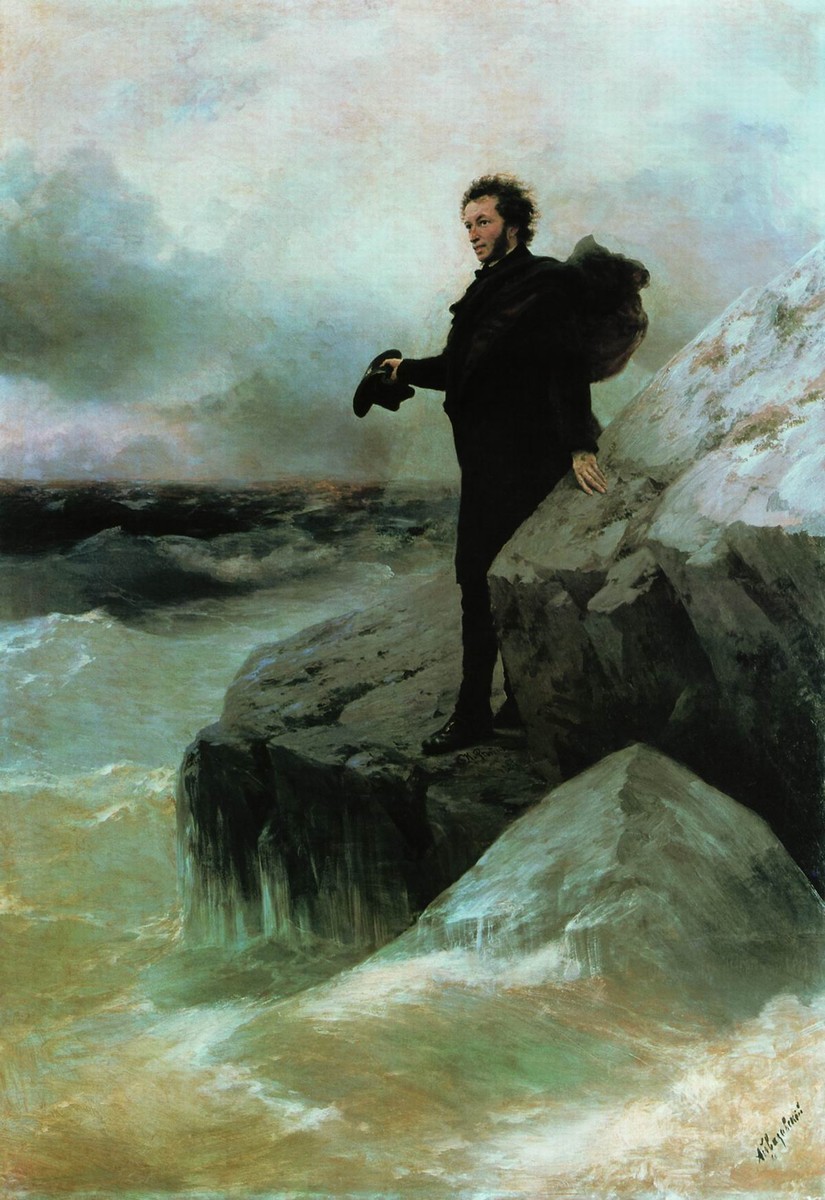 Sometimes Aivazovsky included famous people into his seascapes. About a dozen times it was Pushkin. True, in most of the paintings the poet’s figure is small, his facial features are barely visible, and he is recognisable only by his characteristic sideburns. As, for example, in the painting, Pushkin in the Crimea.

Aivazovsky was a Romantic painter, for whom nature is always greater than a person, no matter how great he may be. Hence the ‘small’ Pushkin, Napoleon or Peter I.

In the painting, Pushkin’s Farewell to the Sea, the poet’s figure is larger, but this painting can hardly be called an exception, because Pushkin was depicted by… Ilya Repin.

Aivazovsky asked him to do it. The famous marine painter admitted that Repin was much better at portraits. And he didn’t even take offense at his criticism. Once Repin noticed that Aivazovsky’s figures were illuminated by the sun from both sides and that it was contrary to nature, to which Aivazovsky, not at all offended, replied: ‘Ah, Ilya Efimovich, what a pedant you are.’

Repin assessed his work very modestly: ‘Aivazovsky painted the marvellous sea… And I was honoured to daub a figure there.’

Among the Waves is Aivazovsky’s largest painting (285×429 cm). How long do you think it took him to paint it? For several years? For many months? For ten days! And it was at the age of eighty! However, Aivazovsky almost paid with his health for this work. To paint the upper part he climbed onto a wooden platform. But one day he became oblivious of his surroundings and began to move back to evaluate what was done. And he fell down… Fortunately, a servant managed to catch him up.

Among the Waves is a very realistic painting. The moon is not too bright here – just a wide beam. There are no spectacularly listing ships either… Though… There was one boat. When Aivazovsky showed this work to his relatives, one of his sons-in-law, a ship engineer, argued. He was surprised how this fragile boat-shell keeps on the waves. This annoyed Aivazovsky, but the next day the boat disappeared – the artist painted it over mercilessly.

This portrait was painted when Aivazovsky was sixty-five. The age gap with his second wife was forty years. Their marriage lasted eighteen years.

A beautiful and modest woman, after her husband’s death she wanted only solitude. She spent the remaining forty-five years of her life alone.

Once, in the first years of his studies at the St Petersburg Academy of Arts, Aivazovsky brought his drawing to the class. The teachers were amazed. They were sure that Aivazovsky had not drawn it himself, and if he had, he had made a copy from a work of some expert.

This is not a copy, but a work of the early Aivazovsky. It demonstrates only one thing: if Aivazovsky had not been born by the sea, if he had not become a marine painter, he would still have become an outstanding painter. With the sole exception that we would have seen luxuriant forests and romantic cities.