Yes, Russia is right, and the Russians are right when saying: “This is our victory, we shall surrender it to no one!” Because this is not about any war (there were many wars), but about the Greatest Victory ever – the Victory over fascism.

Those of us who have lived many years in Western Europe are passing through a real shocking therapy. Negation of the historical truth which we have detected now, is so much unbelievable, that it challenges our belief in a suggested essence of the European civilisation. Because we had been told for decades that the European historiography is not an ideology-driven platform for mind affection, but a research discipline based on indisputable facts and documents.

It was possible, but I am not sure whether it really happened. However, today we observe exactly the opposite. The interpretation of World War II in Western Europe – namely, its run-up and its final – is so much influenced by the Western ideology values, that there is no more space for the historical truth. 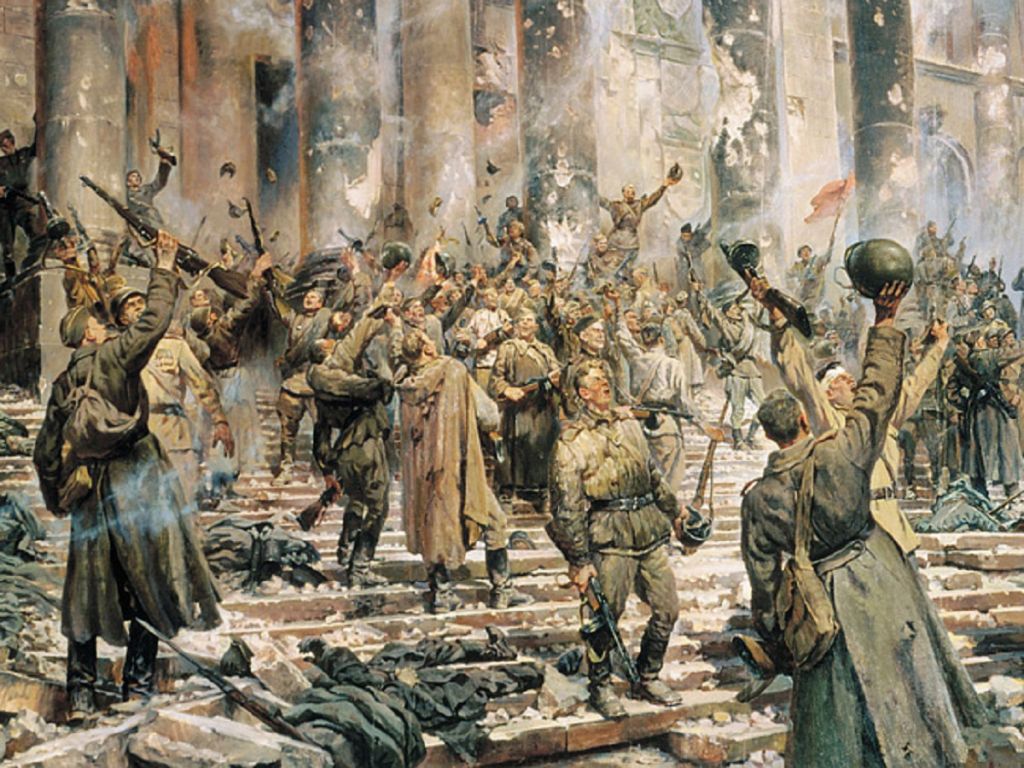 To be fair, I would like to note that this odious fraud went native about twenty years ago. Of course, there were attempts to ideologically revise history at several American universities, particularly at Stanford, where they praised and justified Vlasov and Shkuro, but generally Western Europeans still remembered the great exploit of Soviet people – its Great Victory over fascism. It was especially well remembered by Germans. They were well informed of who beat Nazists, who captured Berlin. They showed in their films how Hitler imprecated Russians for their victory and conquest of the capital of the Third Reich, while hiding in his bunker. They showed Himmler and other high-ranking Nazi officers cherishing a hope of cutting a separate peace with Americans, so that they could fight together against the Soviet Union.

We know, based on documents and verbatim records, that Stalin was aware of such plans and was afraid of their implementation. But the Red Army forces which took Berlin by storm prevented from bringing those plans to life.

There is a nefarious fact confirming this assumption which relates to signing of the German Instrument of Surrender on 7 May 1945. Do you know where? In Rheims. Look at the map to check the distance between this French town Rheims and Berlin, the capital of the Third Reich. Rheims never saw military actions, but Berlin almost saw a natural apocalypse. However, Rheims gave a nest to the US Army command… Today this shameful event is hardly remembered by anyone.

Understandably, Stalin refused to get such pseudo-capitulation serious. He thought, Germans had to surrender at discretion of their real winner, with this happening in their beloved but ruined Reich capital – but not in strange Rheims.

Admiral Friedeburg approached Rheims back on 4 May to propose capitulation of Nazi forces to Eisenhauer – but “only on the Western front”.

However, the order issued by admiral Doenitz contained the following: “All forces standing against the Eastern enemy shall draw in the West as soon as possible and battle their way through Russian military dispositions where necessary. Stop any resistance against Anglo-American forces immediately and arrange voluntary surrender into captivity. A general instrument of capitulation will be signed right today hosted by Eisenhauer”.

This is all about shameful background of the capitulation. To be fair, it should be noted that Eisenhauer refused to participate in the signing ceremony. But it was not a principal refusal; it was only due to adherence of protocol rules, as the German party was represented by a person ranking lower than a Commander-in-Chief – which also confirms the machination idea. 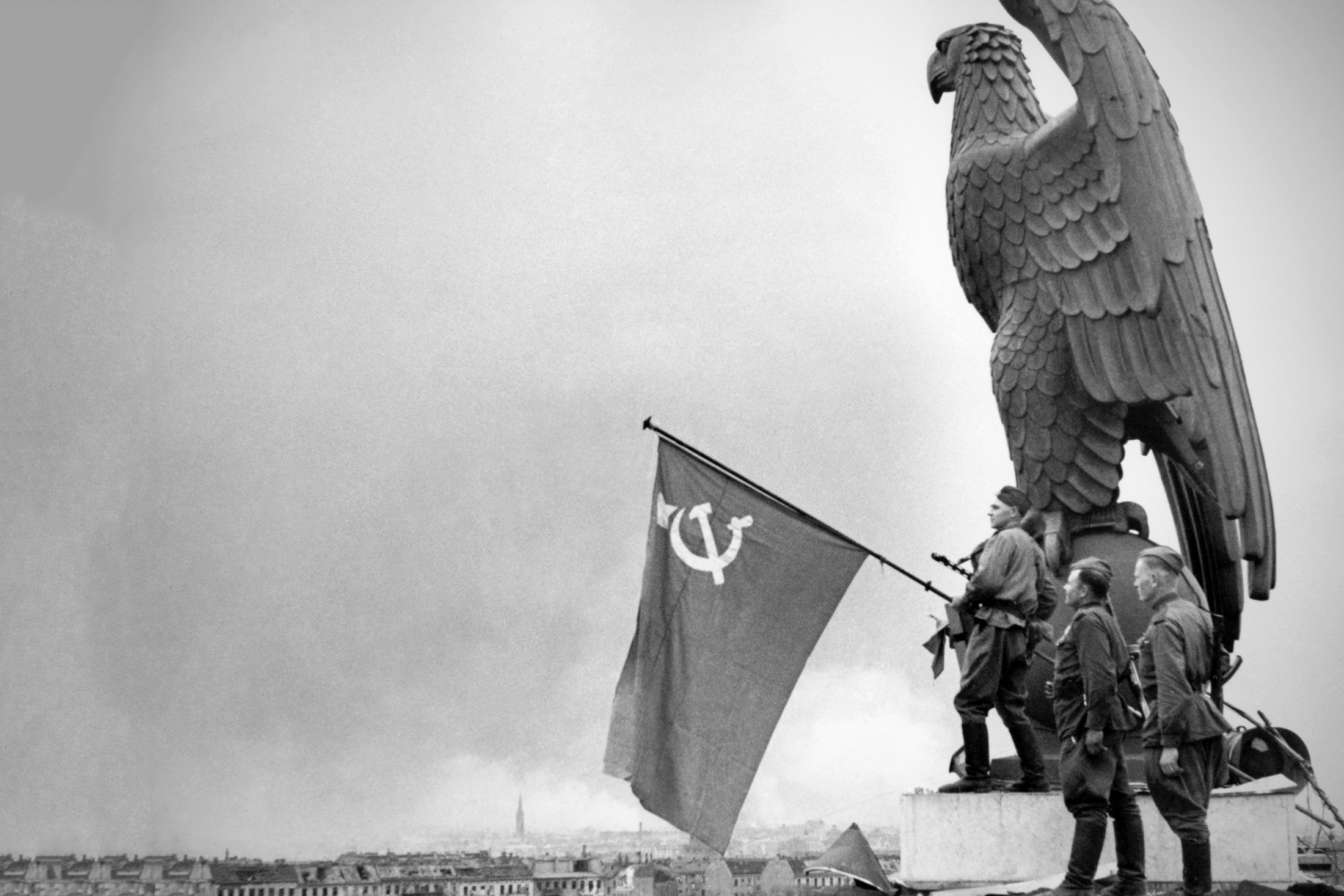 Stalin declared the following regarding capitulation in Rheims: “The agreement signed in Rheims can be neither cancelled nor adopted. Surrender must happen as the historically most important event at the place giving birth to fascist aggression, in Berlin, – and not as a unilateral act, but strictly as the act executed by the supreme command of all the anti-Hitler coalition members”.

So, the true surrender took place in Karlshorst near Berlin. The instrument was signed by Wilhelm Keitel, general and field marshal, Chief of the Armed Forces High Command of Wehrmacht. This instrument was accepted and read loud by marshal Georgy Zhukov, a person who had had a leading hand in conquest of the German capital. It happened on 8 May 1945 at 23:01 CET which corresponded to 9 May 1945 at 01:01 Moscow time. Soviet citizens received the news about surrender of Germany at 02:10 in the night from country-wide known Yuri Levitan who announced this news on the radio.

Germans and Americans attempted to misappropriate the Great Victory before the formal end of the war. Of course, they knew that the Red Army (not any other one!) had beaten Nazi horde which was unbeaten before and had won all European armies resisting against Germany in 1940 literally just in few weeks.

The Third Reich practically covered the entire mainland Europe. Americans knew it. They also knew that 90% of killed German military persons had fallen in battle on the Eastern front between 1941 and 1945. The Western front was organised much later, following the American disembarkation in Normandy on 6 June 1944. There were only few months left before the end of the war, with its outcome being absolutely clear and doubtless.

This apocalyptic combat against Nazi evil spirit took 27 million Soviet lives. This is a real price to the win! This is remembered by the Immortal Regiment movement. This is embodied in monuments to Soviet soldiers being spread across the entire Eastern Europe, with some of them being desecrated in several countries.

But what is specifically slander, some countries attempt to underestimate the principal role played by Russia and its people to gain the Great Victory. This is a profanation. Russia is true and proper when asserting its right to the truth and sacred admission of sacrifice brought by its people for the sake of rescue of humankind. The truth is solemn!

Let us remember the speech by the great warlord Saint Alexander Nevsky who righteously declared once and forever: “God is in right rather than might!”

Редакция РМ
Предыдущая статьяQuid est veritas, or What is truth?
Следующая статья The debt of memory