It is curious that Banksy brought art back to where it once began. On the walls! Once it was the cave walls. Now – the buildings walls. And no “third parties” such as museums between the viewer and the painting.

Banksy gives his own comments on his incognito position: “If you want to be heard, you better wear a mask when speaking”.

His words contradict the familiar world view. Indeed, in this era of smartphones and social networks, almost everyone showcases their lives.

And being Mr. X in this kind of world turns out to be the best way to attract attention. And people really “hear” him.

A Girl with a Balloon is the most popular work by Banksy. For the first time, this graffiti appeared in South Bank area in London in 2002.

Probably, this is the only artist’s work, whose meaning is not known for sure. A heart-shaped balloon is carried away from a girl by a gust of wind. She is upset, but too calm in NO childish manner. In short, she took her loss philosophically. A common child would be crying and stamping her feet with annoyance.

The artist himself gave lengthy comments on this work: “When this happens, just leave quietly”. Which means that he tells us to withstand our losses steadfastly, without strains and hysteria. Probably, in 2002 he went through his own loss, and this painting expresses some personal experience.

And since we know nothing about the artist, we cannot “read” it to the end.

In this case, everyone chooses what to see in it: hope for the better, discontent with our children growing up too fast or importance of being courageous when facing any difficulties.

This image has become especially popular after an incredible incident.

As early as in 2006, Banksy created the author’s paper copy of the “Girl” using acrylic paints. He inserted it into a gilded frame. Such frames are used for Rembrandt. And sold.

And in 2018, this work was put up for bidding. And when the hammer hit for the third time with the words heard: “And 1 million 400 thousand – three! Sold!” – the painting… self-destroyed! Well, almost… It turned out that 12 years ago, Banksy was the one to build it into the frame. He expected that one day his painting will be sold at an auction and all he pull have to do is to press a button.

I see all this from the following point of view. In our world, the value of material benefits substantially decreases. We throw things away easily and change clothes every season. Now, the time for works of art has come.

Sweeping this Under the Carpet. 2006 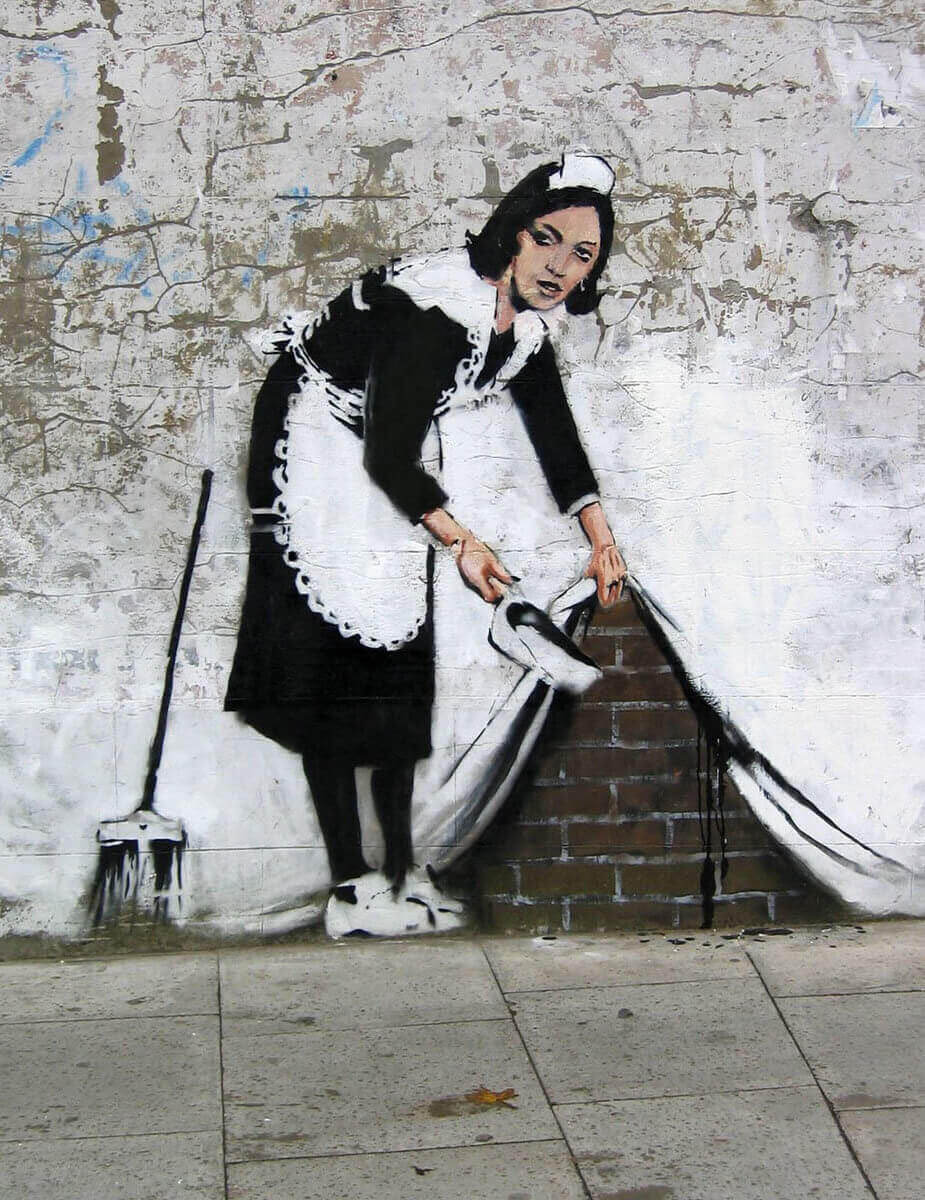 A girl in dressed as a maid is sweeping rubbish under the wall. For the first time, one of the Banksy’s most popular works appeared on the wall of a Gallery in West London in the same 2006.

The artist plays with a metaphor: instead of solving too inconvenient problems, the government just hides them “under the carpet”, since they will affect the reputation of those in power as soon as they become public.

It is difficult to say which exactly problems Banksy had in mind. I can only guess that as early as in 2006, signs of a coming global financial crisis appeared. But no one spoke clearly about a forthcoming collapse.

A woman is hanging for drying just washed stripes of a … zebra!

It is curious, of course. What is surprising is that this work of Banksy is little known. Probably, because of its location. It appeared in 2008 in a settlement in Mali (West Africa).

There are only few photos of this work. Most likely, it has been destroyed long ago. Just because the residents of this half-abandoned settlement have hardly heard anything about Banksy.

So, what is the artist’s message? It’s immediately becoming clear that people of Mali are facing great problems with water. Meanwhile, the woman in the picture is wasting it. She spends it on the flat nonsense – is washing zebra stripes.

Thus, the artist hints at how easy it is for people from Europe and North America to get water. And how badly people on the African continent need it.

We are used to living in a world of abundance. And some people lack everything in this world, even common water.

Banksy left this graffiti the door of Broad Plains Boys club in Bristol. This work is interesting not only because of its meaning, but by its history as well. At the time when Banksy painted these graffiti, the youth club was on the edge of being closed. Its owner took off the door from the hinges and brought it into the club. He wanted to charge a small fee showing the work to let the club exist. 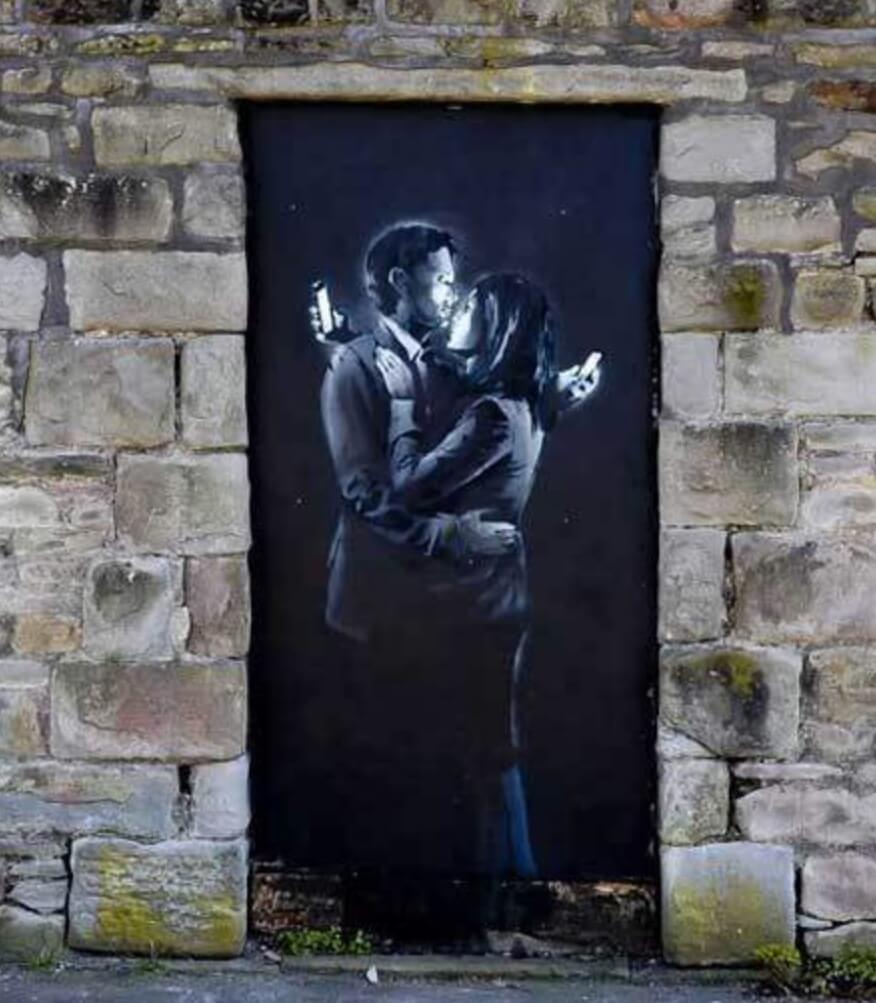 The city authorities confiscated the door and placed it to a museum. The club owner turned out to be a brave man and sued the city mayor!

All this fuss went on until Banksy intervened. In a letter to the club owner, he wrote that he wanted to help his centre. Therefore, he insisted that the work should belong to him, but not to the city.

The club owner sold the door with the painting by Banksy for 400 thousand pounds. The youth centre was saved. As good as modern Robin Hood!

In 2015 in the Gaza Strip, an image of a cute kitten with a pink bow appeared on a destroyed wall. The contrast turned out to be incredible. A kitten on the back of ruins.

The life of Gaza people couldn’t be worse. For 8 hours a day they have electricity turned off. 90% of water from wells is not suitable for drinking. Thousands of people died under shellfire.

A piece of this long-suffering land is surrounded by a fence: almost no one is let out. Attempts made by international sponsors to link this land with the surrounding world have failed. Construction of a port and an airport that has just begun was stopped by shellfire. Only trucks carrying humanitarian aid, such as food and soap, are allowed inside this sector. Everything else is prohibited. Even building materials! And it’s simply impossible to rebuild the destroyed buildings.

Those who were unlucky to be born here fell into this trap. More than half of the population are children. Here, birth rate is extremely high as in any poor country. This is a prison, a huge children’s prison.

And amidst this prison, the Banksy’s Kitten suddenly appears.

The artist again criticizes us with no regret. People are obsessed with watching cats. So, you are free to admire a cat in the middle of this hell. But there is a hope that one day you will look around.

In 2017, a huge mural with the European Union flag appeared in Dover. The worker is knocking down one of 12 stars so that cracks are spreading all over the flag.

A year before, 51.9% of UK citizens voted for their country to exit from the EU. Obviously, Banksy decided to be among those 48.1% who were against the exit.

Obviously, Banksy used a rope to go down from the roof. Perhaps, he was not alone. Of course, he used stencil plates like n other works. But you must admit, still it was risky.

Just like Impressionists, he had only 15-30 minutes to create. However, the former had a goal of catching the special light. Banksy has a time limit, since he is in danger of being caught. Well, he managed it this time as well.

In 2019, the graffiti, which was estimated at £1 million, was painted over.

At the end of 2018, a painting showing a boy appeared on a wall of a common garage in a small town of Port Talbot (Wales). A happy child is catching snowflakes with his mouth. 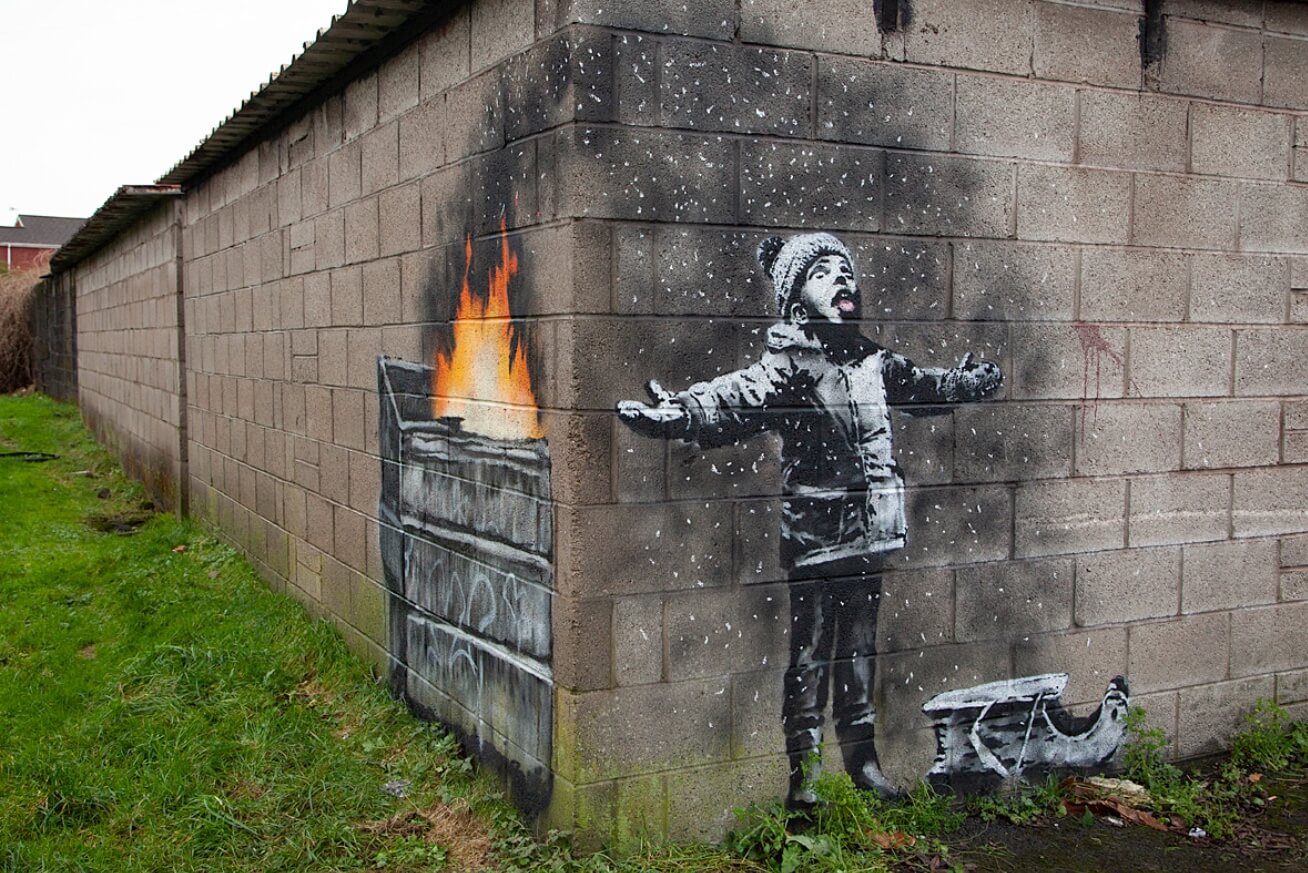 But when you look around the corner, you see … the next part of the work. And you immediately understand that it’s not snow that is flying on the child, but ash from a burning trash bin!

This time, Banksy decided to speak about ecology. And, as usual he has chosen a perfect place to do this, which ideally suits the message.

In the Port Talbot, there is a steel plant that covers it with grey ashes from time to time. It’s easy to see smoking pipes not far from this garage.

It is of interest that the garage owner sold this work to a collector for 100 thousand pounds. But under the condition that the work will remain in the city.

Perhaps, it will be able to change the life of the town for the better. And this “snow” in the town will eventually stop.

In 2018, Banksy panted a running rat inside the clock on a Manhattan building (New York). This is the symbol of the rat race! After all, this metaphor is true for many people’s lives. Well, in some countries, a comparison with a squirrel in a wheel is more common. But in general, it’s about marking time. When living according to “home – work – home” scheme does not allow us to take a step aside, to say nothing of moving forward. And there are a lot of office workers living on the rat race principle in Manhattan.

Now, the clock was removed by the building owners. They want to sell it. City authorities are against. City residents are also for the watch being returned. Who knows, maybe Banksy will intervene here as well.