The new autumn season of historical balls in Moscow was opened by the Diplomatic Ball, which took place this year in the middle of September, bringing together the prominent representatives of the modern political elite under the arches of the Palace of Count Saltykov.

The Diplomatic Ball is not only a significant social event, but also a cultural platform for conducting public diplomacy and activities aimed at strengthening peace and friendship of peoples.

The tradition of holding balls has its roots in the distant past. The wedding of False Dmitry and Marina Mniszech marked the beginning of balls in Russia. Peter’s Assemblies, introduced by Peter the Great into the cultural life of Russian society in the 18th century, continued the development of the ballroom culture in Russia, which reached its peak in the 19th century. Balls have become the main way of spending leisure time; here the representatives of high society met each other or sometimes broke existing alliances.

Over the centuries, cultural diplomacy connected the players in the international political arena who sometimes hold opposite views, because the rules and traditions for the historical balls are equal for everyone. The role of cultural diplomacy as a “soft power” tool that contributes to the improvement of mutual understanding between the countries and peoples cannot be overestimated. 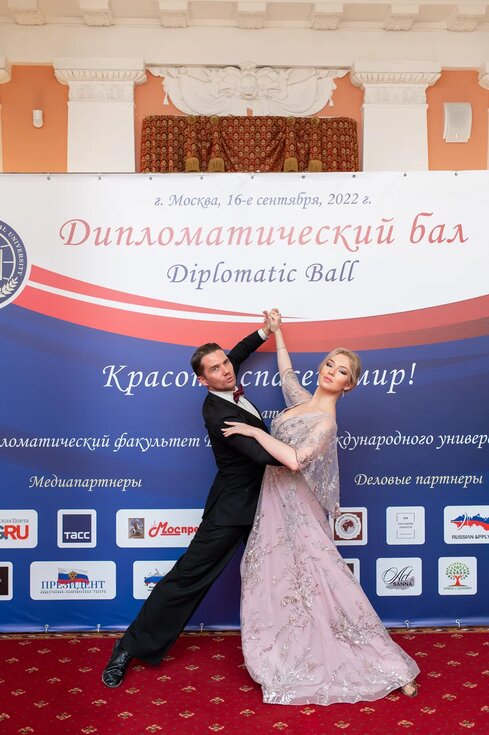 This year the Diplomatic Ball at the Palace of Count Saltykov was attended by the diplomats from 26 foreign embassies, foreign journalists accredited in Russia, representatives of international business corporations, members of the public diplomatic movement, students of the Diplomatic Faculty of the Eurasian International University, as well as the Diplomatic Academy of the Ministry of Foreign Affairs of Russia, MGIMO University and Moscow State University.

In his welcoming speech, the presenter noted the significance of the event, emphasising that this year it has become a cultural platform for public diplomacy, as well as a large-scale charitable project aimed at establishing a lyceum for gifted children at the Eurasian International University.

The organisers of the Ball prepared a unique program for the guests, in which leading artists and musicians took part.

The Ball opened with a concert program featuring soloists from the Bolshoi Theatre and the Verdi Hall Theatre. The ballet troupe Ballet Nacional de Rusia under the direction of Tatiana Panteleeva performed the waltz from Tchaikovsky’s Sleeping Beauty with the participation of artists of the Bolshoi Theatre of Russia. The Verdi Hall Theatre brought the guests of the Ball into the world of brilliant operetta music. The guests enjoyed Musetta’s Waltz from Giacomo Puccini’s opera La Bohème performed by Ksenia Muslanova, laureate of international competitions, soloist of the Bolshoi Theatre of Russia, the Stanislavski and Nemirovich-Danchenko Moscow Academic Music Theatre and the Moscow Opera House.

The Ball program was opened by the historical polonaise dance performed by the ballet troupe Ballet Nacional de Rusia. The ballroom part of the event, where the guests themselves were the main participants, became the culmination of the evening.

The Ball organisers never ceased to amaze the guests and at the end presented the soloist of Parma’s Royal Theatre of Italy, Olga Leman-Balashova, who performed the aria of Lauretta from the opera Gianni Schicchi by Giacomo Puccini.

An additional note of warmth was added to the atmosphere of the event by an old folk dance game, the game Brook which is familiar to, and close to the hearts of, many participants from a very young age.

“The first Diplomatic Ball was not only a significant social event, but also a notable act of public diplomacy. Diplomats from different countries, political and public figures met here in the ballroom. In an informal setting, they had the opportunity to exchange views on topical issues. I especially want to note that the Ball is also a charity event. The funds raised from the Ball will be used to support the establishment of a lyceum for gifted children at the Eurasian International University,” Konstantin Klimenko said.