For the 170th anniversary of the opening of the first public museum, the New Hermitage, in Saint Petersburg on February 17, 1852

The Hermitage in St. Petersburg. 5 buildings. 20 km of corridors. 350 halls. 60,000 paintings. You will need 40 days to view them all. If you stop at each picture for at least one minute.

The Hermitage has not been justifying its name for a long time. This word is translated from French as “a secluded place, cell.” That was until the middle of the 19th century. Then it could be visited by rare guests on special passes. In 1852, the museum was open to all comers.

The Hermitage collection is grandiose. No wonder the museum ranks 13th in the world in attendance.

Alas, the Hermitage collection has also suffered serious losses. After the 1917 revolution, the Soviet government sold 48 masterpieces! Titian’s masterpiece “Venus at the Mirror” irrevocably left Russia. “Madonna of Alba” by Raphael. “Adoration of the Magi” Botticelli. This is also part of the history of the Hermitage…

There are so many masterpieces in the collection that it’s very difficult to outline a route through the museum. Here are just 7 brilliant paintings. Different eras and styles. 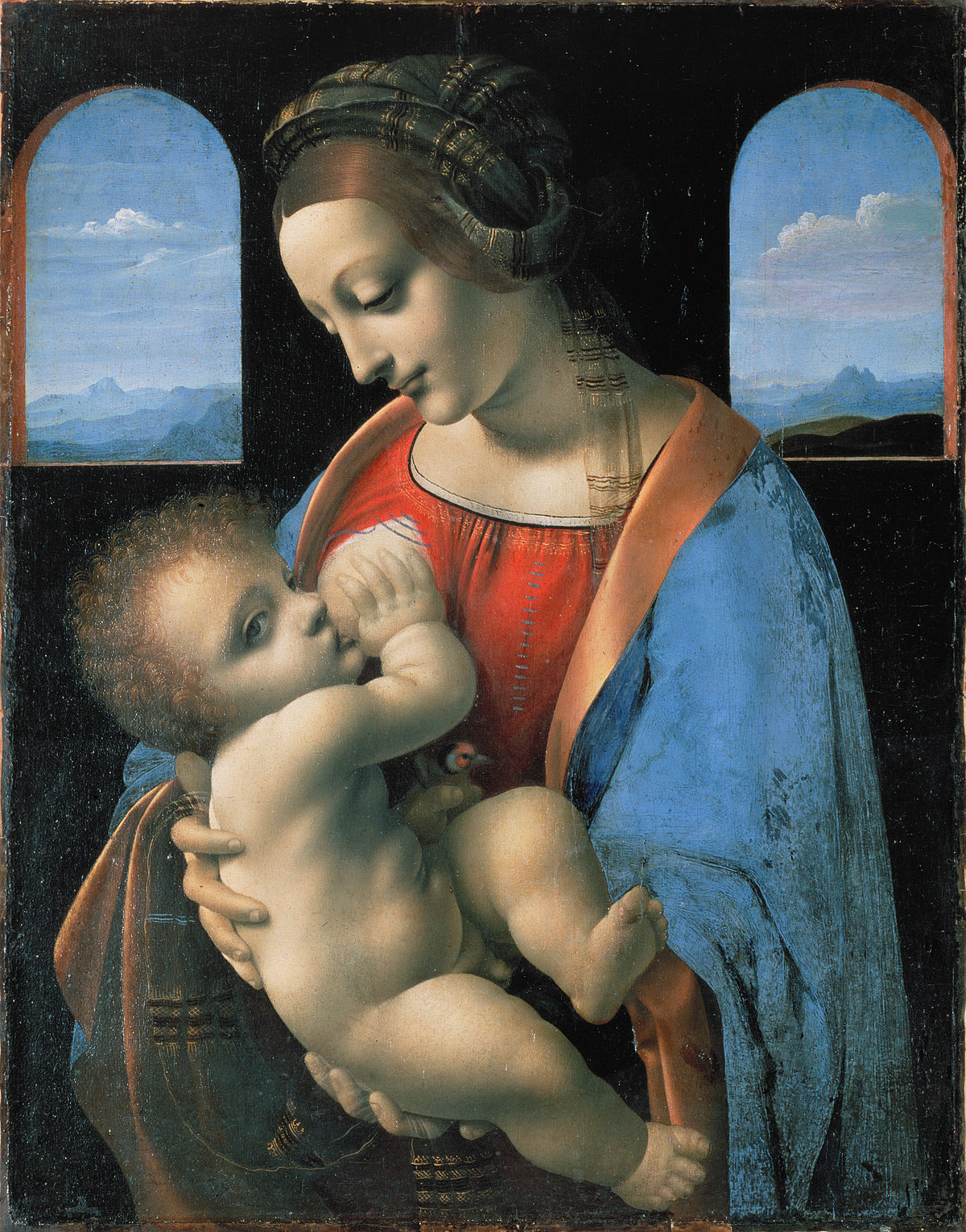 There are few works of the Renaissance in the Hermitage. But among them there are already two works by Leonardo da Vinci. This is despite the fact that in the world there are only 19 works by the master!

The museum acquired a masterpiece in the mid-19th century from the Italian aristocratic family of Litta. The picture returned to Russia. Yes, it was already there.

Giulio Litta brought it with him when he became a citizen of Russia. He married the niece of Potemkin. However, his heiress, daughter of a stepdaughter, returned the painting to her Italian relatives after the death of Giulio.

The picture is small – 41 x 32 cm (16 x 13 inches). But after a few seconds you stop noticing it. Something very majestic fits in the small space of the picture. Timeless.

Mother with great tenderness looks at the baby. He falls to her chest. With little sad eyes he looks in our direction. After all, five minutes before that, a little drama broke out. Virgin Mary decided to wean the baby from her breast. The cut-outs for feeding were carefully sewn.

But she could not resist the requests and crying of the baby. One neckline was rushed in a hurry. So Leonardo portrayed the mercy and love of a mother for her child. 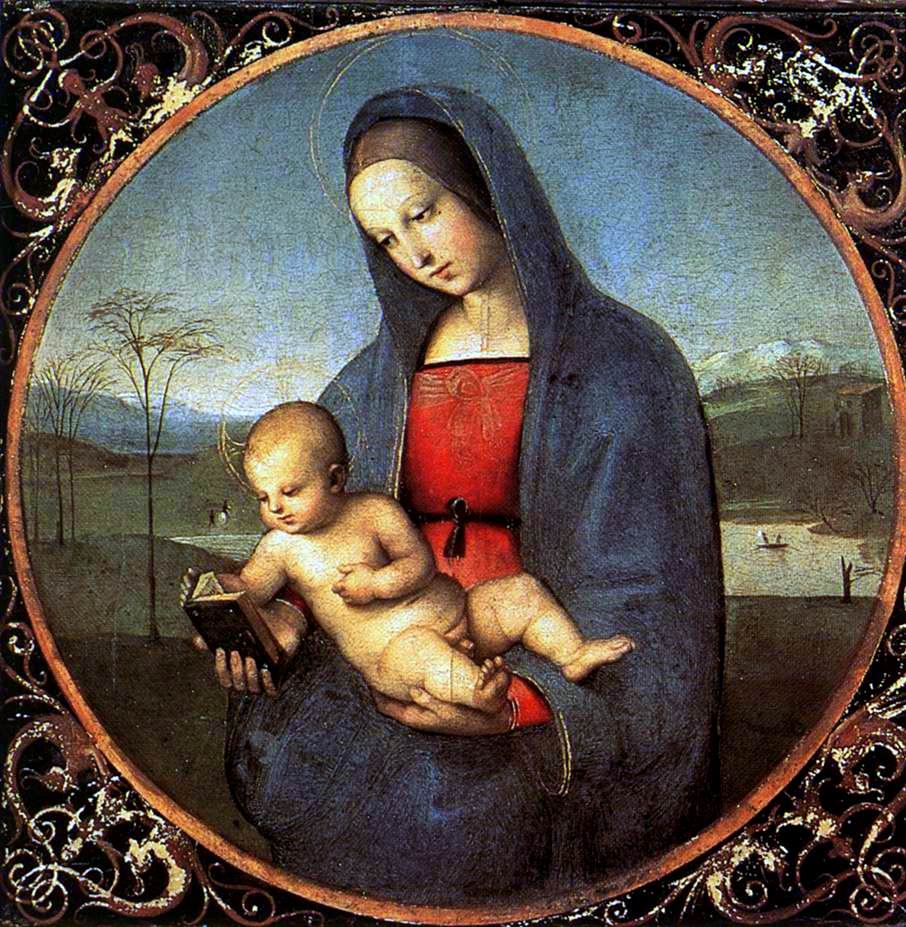 masterpiece of the Renaissance is kept in the Hermitage. “The Conestabile Madonna” by Raphael.

Alexander II bought it for his wife. The purchase was scandalous.

The Italians were outraged that their legacy was leaving the country. They scolded the owner, Count Conestabile. Persuaded not to sell. Even raised money to buy a masterpiece and leave it at home. But they never managed to collect the right amount of money. The picture went to Russia.

It is stored in its native frame, which was executed according to Raphael’s drawings.

Raphael created his masterpiece at a young age. He was barely twenty years old.

But this is the value of this artwork. It was created in the city of Perugia, in the teacher’s workshop. Rafael has not yet seen the artworks of Leonardo and Michelangelo, which will greatly affect him.

His art is still very original. Thin lines. Gentle colours. Harmonious landscape. We see his genius in its original form. Thanks to Madonna Conestabile. 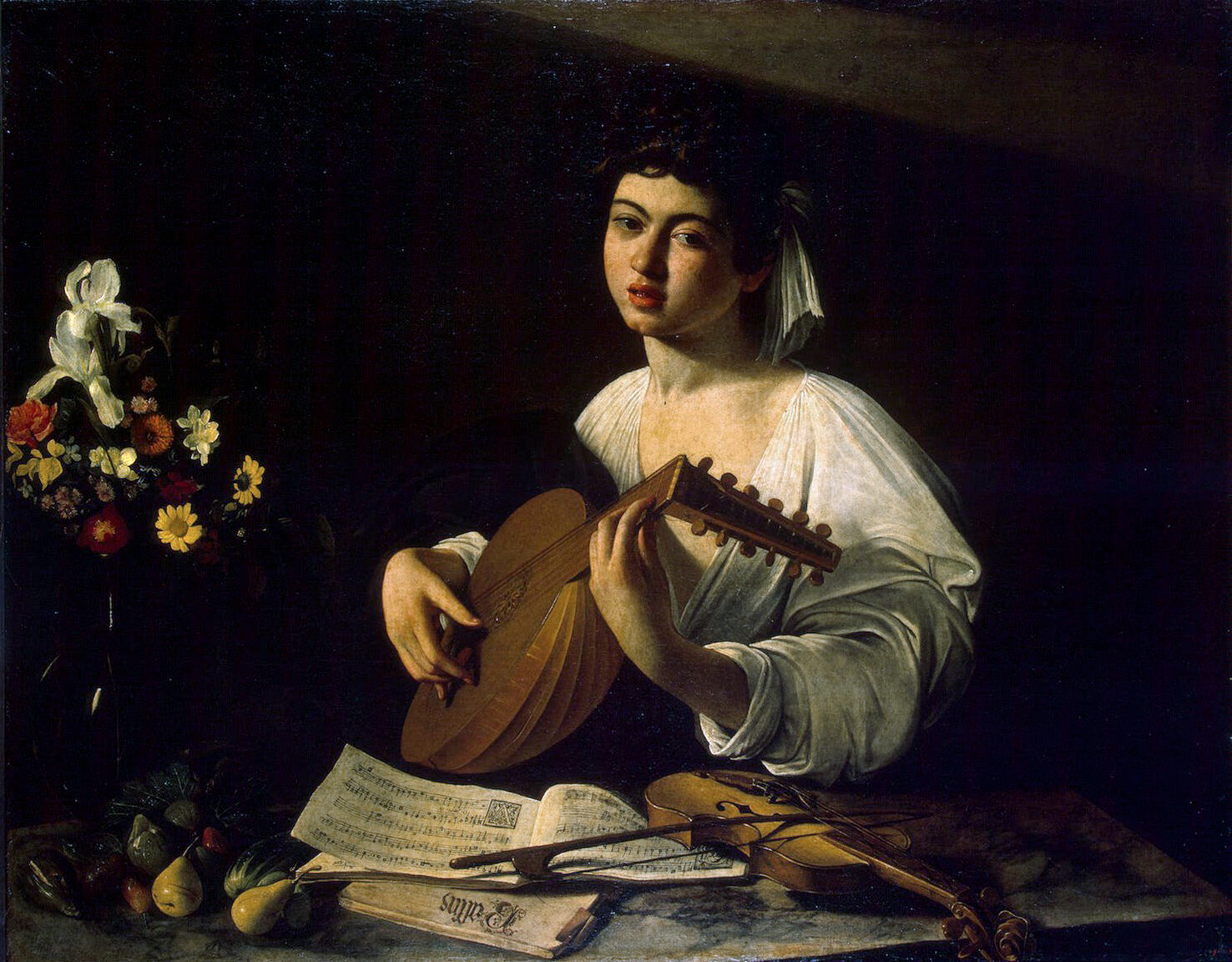 “Lute player” of Caravaggio was purchased at the beginning of the XIX century at the request of Alexander I.

For a long time, the picture hung in the Hermitage under the name “Lute Girl”. After all, the young man is depicted very sensual. Only flat chest suggests that this is not a girl.

Young Caravaggio noted that paintings with such youths were successful with some representatives of the Catholic Church. Therefore, he willingly wrote them.

But he soon abandoned such stories. He increasingly depicted tragic Bible stories. The Taking of Christ. Death of the Virgin. The Entombment of Christ.

Caravaggio was often called a naturalist for his unusual elaboration of details. Spoiled fruits. Cracks in the lute. Shabby notes.

Caravaggio first used his famous Tenebroso in The Lute Player. This is when figures and objects are pulled out by a dim beam from pitch darkness.

So the almost tangible volume is shown. And the character’s emotions take on a dramatic connotation. Such a theatrical effect will become very popular in the Baroque era.

Rembrandt. The return of the prodigal son. 1669

The painting “The Prodigal Son” is one of the earliest acquisitions of the Hermitage. It was purchased from the French Duke by order of Catherine II in 1766. 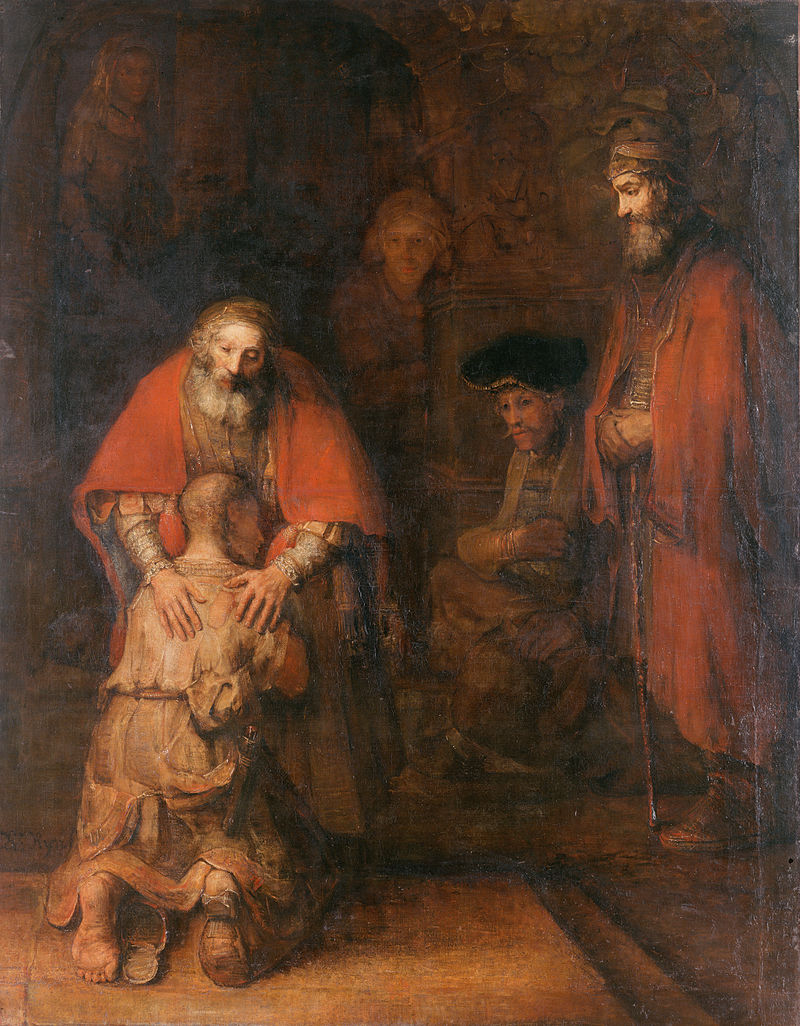 This is the last artwork of Rembrandt. A crowd always gathers near this masterpiece, because it makes a strong impression.

A plot from the Gospel of Luke is depicted. The youngest son wandered around the world. Spent the inheritance of his father. He squandered everything, captive of his passions.

And so, in extreme need, he returned to the threshold of his father’s house. His clothes turned into rags. Slippers stuttered. His head was shaved because he was in hard labour.

The father graciously accepted his son. He bent over him and gently laid his hands on his shoulders.

The picture shows twilight. Only weak light fashion figures. The woman in the background is barely distinguishable. Perhaps this is the mother of the returning young man.

The picture tells of parental mercy and forgiveness. It is about the fact that even a descending person has a hope to find shelter. Provided that he will take away his pride and kneel. 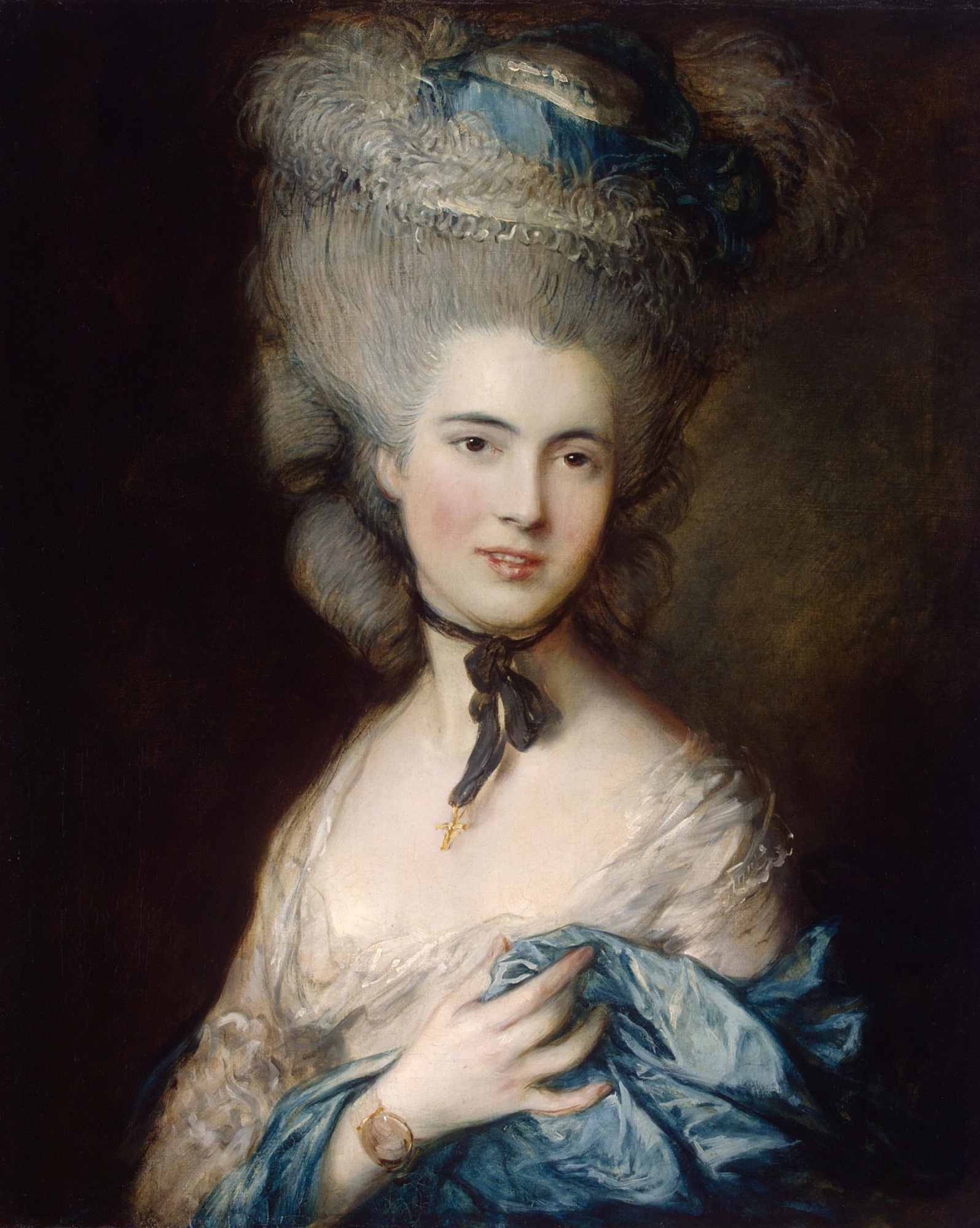 At the beginning of the 20th century, “Lady in Blue” was transferred to the Hermitage according to the will of nobleman Alexei Khitrovo.

It is considered one of the best artworks of Gainsborough. Although he did not like to paint portraits. He was forced to carry them out for customers to feed his family. However, he became famous thanks to portraits.

In this picture we see all the best features of the Rococo Era. Light, melting strokes. The ideal of sophisticated beauty. The airiness of the image. Elegance in the facial expressions and gestures of the heroine.

At the same time, there is no chewing and pretence. Woman is natural. Countess Beaufort was just such in life. Graceful and feminine.

Surprisingly, her mother was a member of the Blue Stocking community. These were some kind of feminists of the XVIII century. They valued their readability and broad outlook above women’s outfits and worries about the house.

In Russia there are many paintings of Gauguin. Thanks to collector Ivan Morozov, a pre-revolutionary industrialist. He bought “The Woman Holding a Fruit” in 1908. 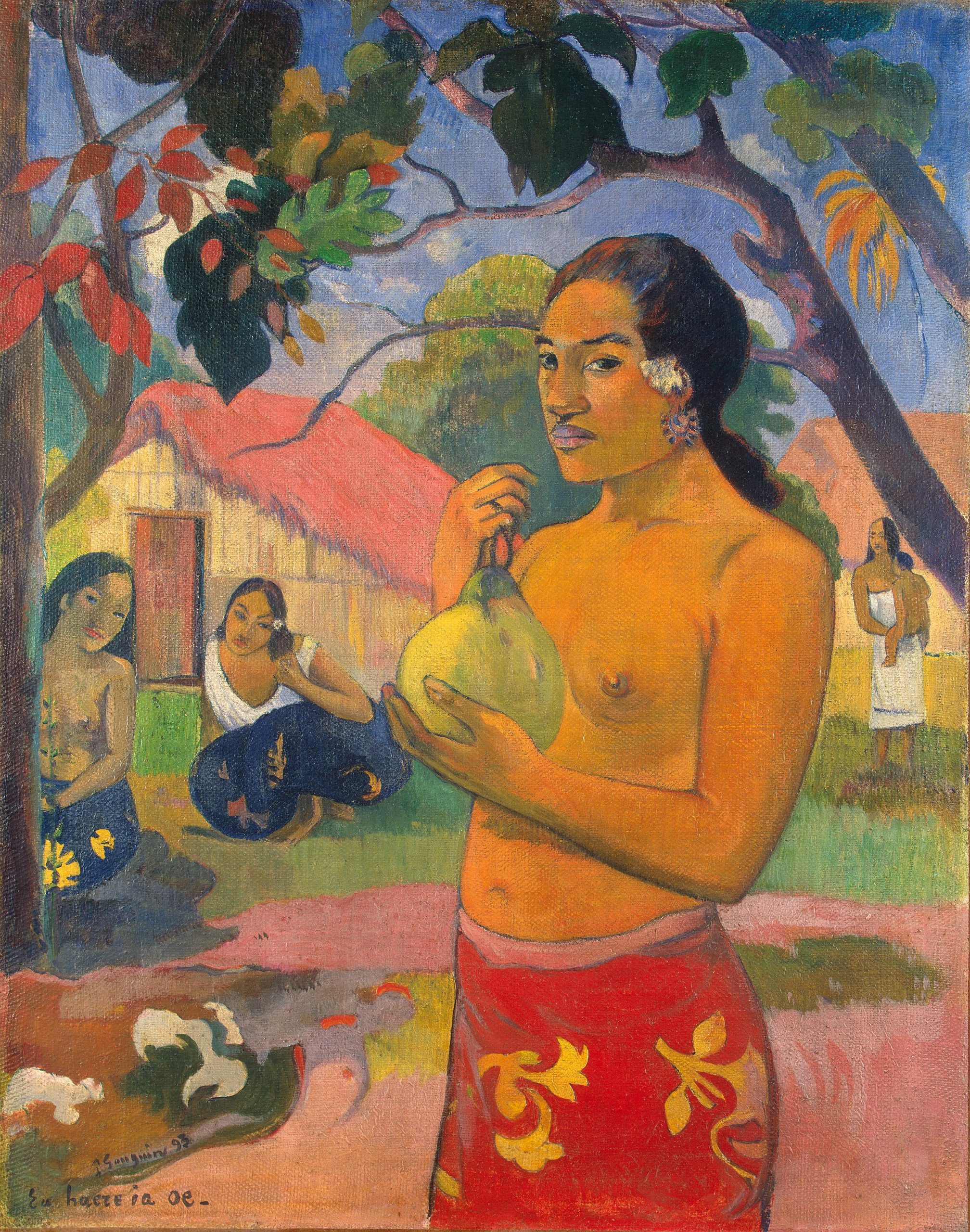 After the revolution, his entire collection was nationalized. In the middle of the 20th century, it was divided between two museums: the Hermitage and the Pushkin Museum in Moscow.

Gauguin was a very extraordinary person. A quarter Peruvian, he was always drawn away from the bustling cities. Once he got to Tahiti.

There the artist wrote “Woman Holding a Fruit”. Flat image. Bright colours. Exotic details (on the road there are “waves” of sand and grass, as in Japanese paintings).

Pay attention to how thin the paint is. We see the texture of the canvas. Gauguin was extremely poor. Paint was expensive. He had to spend it very sparingly.

The audience did not accept such unusual painting. Gauguin was miserable. The artist’s paintings began to be bought only a few years before his death. 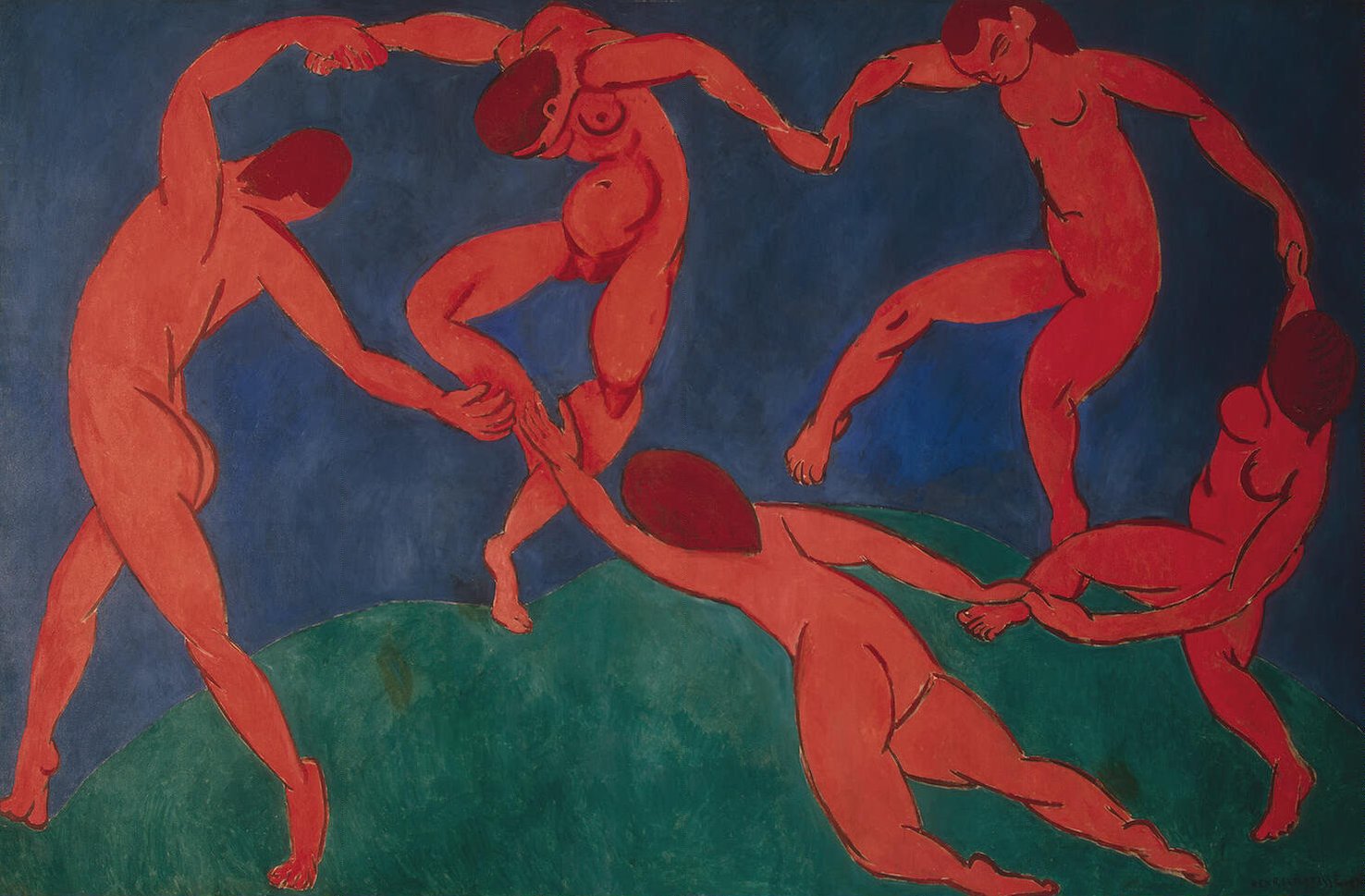 The painting “Dance” was commissioned by the Russian merchant and art collector Sergei Shchukin. Before being sent to Russia, the panel was shown at the exhibition in Paris. The public scolded the work. Shchukin used to be called a collector of all sorts of rubbish, but this time he faltered and refused to accept the commissioned work. Then he changed his mind and apologized to the artist for his weak moment. And the panel, together with its companion piece “Music”, safely reached Russia.

Now this “trash” is considered one of the main masterpieces of modernism. The canvas depicts the image of the golden age of mankind. That was the era. People enjoyed progress and arts. They believed that they lived in the most prosperous time. But it was only the calm before the storm. They would see the terrible hardship of world wars soon.

The picture is painted with only three colors. This further emphasizes the symbolism of the bodies. They whirl in a frantic dance. It is the quintessence of passionate, pure movement. But this emotionality is not chaotic, it is balanced by movement in a circle, by centrifugal force. And also by the classic shapes of the dancer on the left side.